Jesus Christ is King – it’s probably the first time that phrase has broken on a global level in a long time. Not because the world has a new found appreciation for the Roman Catholic liturgical calendar that celebrates that title every year on this the last Sunday of our “Church Year.” No it’s “trending” because of Kanye West – seemingly the most unlikely of sources – after his over 20 years being in the music industry as a rapper, singer, song-writer, producer… after myriads of headlines, controversies – a month ago, Kanye released his first Christian hip-hop album entitled “Jesus is King.”   To the shock and surprise of the industry, (especially music critics who at most gave it mixed reviews) it has become an international hit – topping the charts on a whole host of different lists of genres – but including the most important ones to the music industry for Top albums, and Top singles all across the globe.

Hi everyone! This is my homily for November 24, 2019 – THE SOLEMNITY OF OUR LORD JESUS CHRIST, KING OF THE UNIVERSE The readings for today’s Mass can be found HERE Thanks as always for reading; particularly grateful for sharing this blog on your social media sites; and your feedback and comments. I appreciate it! Have a great week – God Bless – Fr Jim. AUDIO [/soundcloud]. Also you can get the audios of the homilies from iTunes as a Podcast: https://itunes.apple.com/us/podcast/fr-jim-cherns-homilies/id1440618142?mt=2

This album’s release and his very public and bold proclamation of Jesus Christ is King is relatively new, but in interviews he speaks of how this has been an evolution for him over the last few years. He begain in sharing his testimony last Sunday at Lakewood Church in Houston Texas speaking with Pastor Joel Osteen“ God has been calling me for a very long time; but the devil has been distracting me for a long time…” He explained that it wasn’t until he was at one of the lowest points of his life, suffering a mental breakdown in 2016, hospitalized in UCLA that he finally started to respond to God, started to embrace Jesus Christ.   He tells of how Jesus Christ met him at that lowest place. How he knew that the devil had tempted him personally with “every shiny thing possible” that he could have ever been shown. But that he found that in accepting God’s plan for his life, in embracing radical obedience to Jesus Christ – that has saved him. Saved him from this mental breakdown that was causing so much distress… saved him from himself – and saved him on a deeper more important level that has eternal implications.

This new found faith though revealed a dichotomy to him in the world. He said he encountered Christians who were seemingly reluctant to preach the Gospel to Him because he was a “superstar” but Kanye responded “the only superstar is Jesus.” He was baffled to see people trying to get him to soft-pedal his new found faith while looking around at how loud everything was around him, observing “we get constant advertisements for strip clubs” (which he accurately described as ‘sex trafficking’) and alcohol… “we get constant advertisements for spirits – for strip clubs and other things like that. But then we bring up the name of Jesus and we are told to quiet that down.” All of these things – the reluctance of Christians and the brassness and aggressiveness of the world we live in motivated him to be even more bold and want to create a Gospel album. The result is that now there are signs, articles, things trending saying “Jesus is King.” 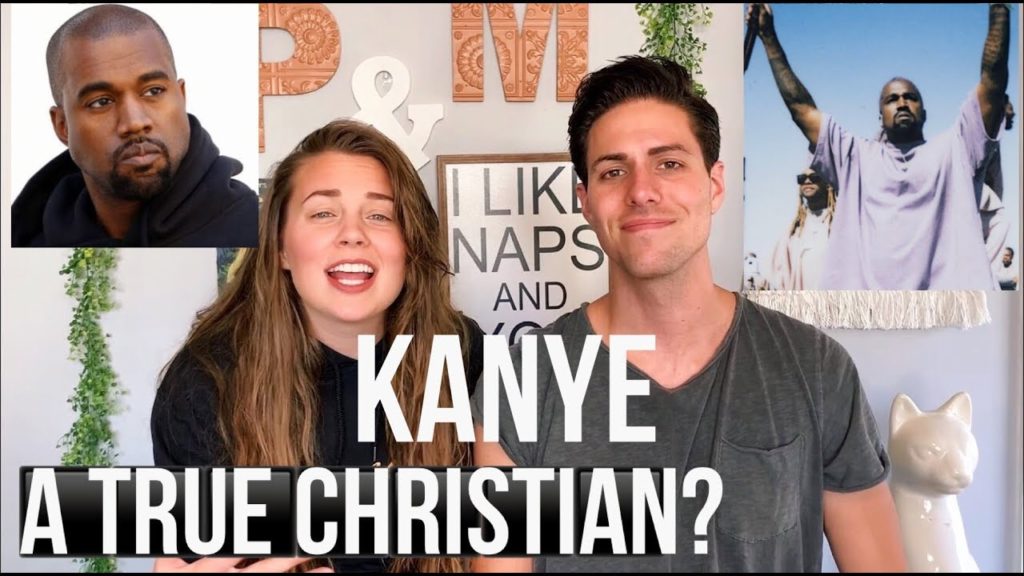 Kanye’s past – and somewhat erratic public behavior fueled some skepticism… some!!! The Los Angeles Times on Monday had a headline “Kanye West’s 5 most outrageous claims at Joel Osteen’s church,” reading the article though, most of those things weren’t outrageous at all, but either were things taken out of context (since I listened to Kanye and Joel Osteen’s whole interview) or things that most believers would agree with. The Washington Post pivoted Kanye’s appearance at Lakewood Church as an opportunity to criticize evangelical Christians, and sow seeds of doubt about the legitimacy of Kanye’s conversion – sow seeds of division by claiming that those who never were fans of his before and were now embracing him were simply racists (not even considering that perhaps a person might not have been a fan of Kanye’s previous public behavior that was sometimes glamorized in his celebrity which he has now renounced and this “born again” Kanye more aligns with their beliefs…)

It’s been fascinating to watch – purely as an observer. I’m not a fan and not ready to make him the spokesperson for all Christians. I couldn’t name a song, an album that Kanye West is connected to from his past… My first recollection of him was hearing about how he rushed the stage at the MTV music awards and interrupted Taylor Swift winning some award, and criticizing President Bush after Hurricane Katrina at a benefit concert. To me I’m not coming to my faith and belief that Jesus is King because of Kanye West. (I’m sure some of you are relieved to learn that it preceded that) But the anger, the vitriol, the hate directed at him because he’s using his celebrity to profess his new found faith and belief is fascinating. Some who were friends, associates, colleagues, and fans of the self-proclaimed “greatest artist God ever created” have disassociated with him. There are new critics of him – people scrutinizing his every move, word, tweet just waiting to pounce; hoping to prove this was all an act, it wasn’t real.

In part, because no matter who says it. No matter what day and age it happens. No matter what context. When you declare Jesus Christ is King – it’s going to result in controversy. It makes people uncomfortable. Because it’s a dividing line. It’s an incredibly bold claim.   For us as Catholics, we are a bit more elaborate and precise: In this celebration, we declare Our Lord Jesus Christ, King of the Universe. Maybe Kanye will use that for his followup album.

But think about what we’re claiming there. We’re not just saying he’s King for us who follow him… we’re not calling him King of the Kingdom of heaven or of the Kingdom of God which evokes images of some spiritual realm. We’re calling him King of the Universe. That means he’s more powerful than you’re University President Dr. Cole…. our Mayor, our Governor, our President, our Archbishop, our Pope… Every visible person of power, of influence, of authority – they pale in comparison to the authority of Our Lord Jesus Christ, King of the Universe.

Yet, very strangely, we would think that to validate the boldness of such a title, we would have readings that would speak of the Universal power, greatness, awesomeness of our God and His Son Jesus who he’s entrusted with this authority. Perhaps we would have started with a reading from Genesis of the creation of the world. Or the story of the Exodus of God’s people, where the Lord leads the Jews from the slavery of the Egyptians by parting, separating the Red Sea into two so that the Jews could escape safely into freedom.

Or most certainly, we would imagine the story of Jesus’ resurrection from the dead or his glorious ascension into Heaven would be an appropriate Gospel for us to proclaim: the greatest victory of any king in the history of humanity… thereby validating why we are being so bold in calling him King of the Universe.

But instead the Church with this Gospel we proclaimed forces us to revisit the horrors of what happened to our King. We just heard the account from St. Luke of Good Friday. We heard how that title, “king,” was used in a way of derision, as a way of mocking him by those who carried out his brutal and savage murder of crucifying Jesus. 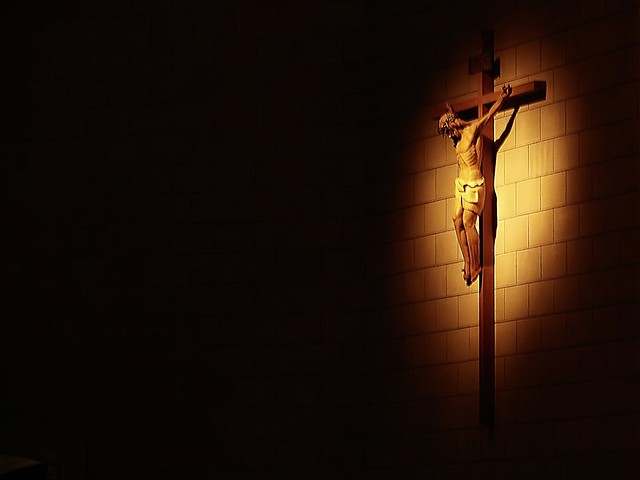 And that’s intentional. The paradox of Christianity is that in the brutality of Good Friday, Jesus’ true power, true authority begins.

Rather than fighting these proceedings, calling upon legions of angelic help to assist in this moment of seeming defeat, Jesus accepts the pain, the senselessness, the loneliness of death on that cross – knowing that when he does defeat them in the Resurrection He will be able to speak to every human being who will encounter the cruelities of a broken world I know what you’re going through. He knows not on an intellectual level, or from observing the pain of someone he loves… He knows having experienced all of this himself.

When people suffer a tragedy… experience a loss, endure pain and fear and worry – so badly that they think it will do them in, Jesus says “I know” When we feel alone, and scared, and abandoned — when we are hurting in ways that we try to hide from the world- Jesus says I know what you’re going through.

But it’s not about simply bonding with humanity in their suffering. We don’t come here to commiserate about the horribleness we experience in this life. We can dare to stare at the crucified Jesus, we can dare to share our own personal crosses and crucifixions here knowing that it is in Jesus Christ alone that our sufferings can be transformed.

That Good Friday was not the end. Had it been, his early followers would’ve sadly recalled that anniversary – recalled it with the sad realization that their hopes and dreams for that man had ended on the cross and years later few would recall his life or his death.

Instead, we recall Jesus’ death knowing he overcame that and came back from the dead. He came back not looking to settle scores with those who inflicted such evil but to save those very people and everyone of us from sin, from death. We come before our King who comes to us, still offers us His Life, His death and His Resurrected life when we eat His body and blood in the Eucharist as the most intimate way He can say not only I know what you are going through, but even more, I am with you and will be with you always. 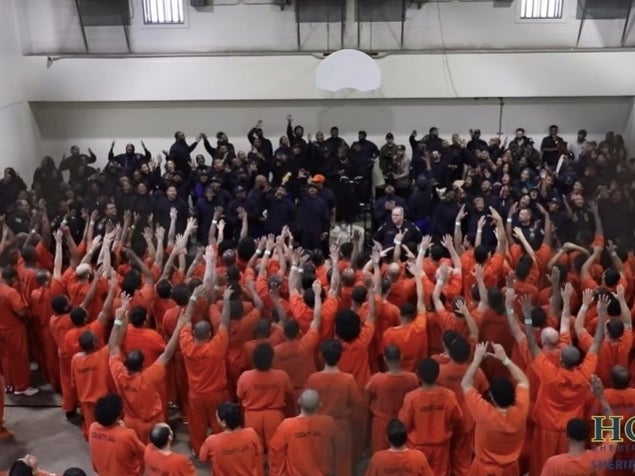 And He looks to us, those who boldly claim Jesus is King to boldly testify to His authority in our lives and proclaiming that in word and deed. Lost in the midst of all the press dissecting Kanye West’s attending Lakewood Church last week and his interview was something even more important than that appearance. Two days before, he made a surprise appearance to the Harris County Jail saying “this is a mission not a show.” Before hundreds of male and female prisoners, he performed selections from his album… prisoners were seen jumping up and down in excitement, on their knees in prayer, weeping as Kanye performed some of his Gospel songs. One of the prison chaplains who knew one of the prisoners weeping said “You could see the brokenness in her life and she bowed down and the tears began to flow. And you could just see the impact and life-changing moment, that defining moment right there.” Whatever happens with Kanye’s career, for those there that day in that very dark place and experienced this moment of light – hearing Jesus is King, who declared that themselves, the chaplain made a prediction. Saying that imagine some of those lives that got changed who “when they go back out in the community, they may look back at that moment and say, I remember that day. I remember that day when my heart was touched and my life was changed.”

May we rejoice that our lives have already been changed by Our Lord Jesus Christ, King of the Universe – and find the courage to share that good news and invite others to experience that it is indeed good news themselves.

A FIGHT WORTH HAVING