Latest News
Home /Blog/AS IF… TOTALLY NOT A CLUELESS HOMILY

My senior year in college one of my older brothers, Craig, who got a Bachelors in Arts Degree from Boston College said he wanted to see a film based on the Jane Austen book “Emma.” Nothing about that sounded even remotely enjoyable to me. When he explained it was the movie “Clueless” which I had seen trailers for on television, I was even less inclined. Just did not seem like my thing. But I have to confess it has become one of my favorite movies of all time.

Hi everyone! This is my homily for October 27, 2019 – 30th Sunday in Ordinary Time (which is the closing of our Fall Retreat). The readings for today’s Mass can be found HERE Thanks as always for reading; particularly grateful for sharing this blog on your social media sites; and your feedback and comments. I appreciate it! Have a great week – God Bless – Fr Jim. AUDIO . Also you can get the audios of the homilies from iTunes as a Podcast: https://itunes.apple.com/us/podcast/fr-jim-cherns-homilies/id1440618142?mt=2

Clueless is hysterical. (Especially when you went to school with people they were imitating). Watching the main characters, Cher and Dion (named on purpose after famous singers from the past who now do infomercials) as they deal with the major crises of their lives:  “totally” being treated harshly by their teachers;   having to argue their way to get higher grades;  trying to get their drivers license,being so stressed by those intrusive things called “classes” that they could only make sense of their lives by going to the Mall.

Eventually, Cher becomes interested in a guy named Josh (how they are family but not related – I’m not even going to try to explain that…) And she realizes the reason he’s never shown any interest in her is because she seems so self-absorbed, self-focused, self-oriented. When her father says that Cher seems to have no direction for her life, and she argues “I have direction” Josh snips “Yeah, toward the Mall…” – He calls her a “superficial space cadet.” A little later, Cher and Josh get into an argument where Josh points out that she doesn’t do anything charitable, to which Cher responds Excuse me, but I have donated many expensive Italian outfits to (her friend) Lucy…And as soon as I get my licence I fully intend to brake for animals, and I have contributed many hours helping two lonely teachers find romance. To which Josh responds – Which I’ll bet serves your interest more than theirs. You know, if I ever saw you do something that wasn’t ninety percent selfish, I’d die of shock.

Now I don’t know if Jesus were speaking his parables to us today if he would use Cher and Josh as an example, but that movie and today’s Gospel ask a similar question: 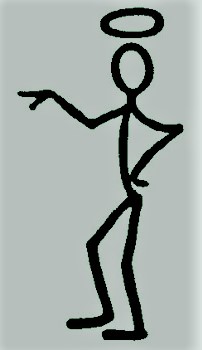 Is it all about us? Are we totally self-focused, self-involved? Because when that happens – it affects everything. We can get so stuck on ourselves that even our prayer becomes focused on us. Look at this guy in tonight’s Gospel reading.   The Pharisee is at prayer and says – O God, I thank you that I am not like the rest of humanity– greedy, dishonest, adulterous – or even like this tax collector I fast twice a week, and I pay tithes on my whole income.” (I can almost hear Cher saying “I totally would brake for animals”?)

There’s nothing wrong with what the man in the Gospel has done:

– not being greedy or dishonest are good things

– Jesus would totally be onboard with that avoiding adultery…

But the thing is – the guy in the Gospel seems to be praising and worshiping Himself rather than God.   He uses the word “I” 4 times, and God’s name is uttered once in that whole prayer. Because he’s doing everything, he sounds like he doesn’t need God or prayer for that matter.   Prayer is just his way of bragging about himself.   He keeps saying I do this and I do that… and in saying (and believing) that, he is the active one. God is just an afterthought. He’s just making sure God noticed…

We hear the complete opposite from the Tax collector – he never uses the word “I”- Instead his prayer is simple, it’s humble, it’s correct: God be merciful to me a sinner. The tax collector knows that his life is a mess. He know’s he’s made some mistakes. He’s cheated people, been rejected by his own people (for aligning himself with the Romans instead of with his fellow Jews) – he’s all on his own. He needs Mercy. He needs Forgiveness. He needs God and he knows that only way things are going to change in his life is by God showing him Mercy – By God working in his life. By the tax collector letting God be God and letting him into his heart and soul things can change for him.

That all of us have chosen to be here tonight is a great thing. But there’s a temptation for us to congratulate ourselves because we know that we’re missing a great number of people that we wish were here. We can either stay in that mind-set there, be proud of ourselves for being here and not like those who aren’t or you and I can be like the tax collector, look into our hearts and be honest with ourselves and with God.

We can ask ourselves the difficult questions: What changes do we need to make in our lives? How are some of our desires out of whack? What are our limitations?   Unlike the Pharisee, we don’t have to compare ourselves to others. God sees the empty spaces we have that we need him to fill – God knows the sins we carry that need his Mercy. So instead of congratulating ourselves for being here, we can be grateful to have the opportunity to be here. Grateful to let God be God and to let him do his work in our lives. . By our sharing in this Eucharist, who knows what work God might accomplish:

– giving someone the benefit of the doubt;

– letting God be judge of things instead of us;

– not just forgiving – but forgetting ours and others past mistakes and offences.

The possibilities are endless.

Towards the end of “Clueless” Cher realizes if she’s ever going to be able to have a relationship with Josh, she needs to change. She starts doing good deeds like organizing a Pismo Beach disaster relief drive, going to support a guy who’s in a skate board competition (who she use to make fun of) among other things. The transformation works – Josh begins to see that Cher is actually beautiful, not just on the outside but inside as well – they end up as boyfriend and girlfriend – and that’s where the movie ends.

When it comes to our lives, we need to change too. And when it comes to things like Prayer and our relationship with God, Jesus calls us not to be clueless. The Pharisee is too pleased with himself and all that he has accomplished to recognize anything that needed redemption, that his life needed to be transformed, and so he leaves the temple no different than when he came in. The Gospel says the tax collector went home “Justified”— meaning he was back in right relationship with God. Something had changed in his prayer: he did. The choice is ours – which of the two characters do we pattern our prayer after? Do we need, do we desire, do we know it is God who can ultimately change us? Will we let him?