Usually the story of someone being released from jail doesn’t become newsworthy to an international audience. But over the summer, a man by the name of Dennis Libonati found a way to make that happen for himself. After serving almost 5 months in jail for charges of assault and battery, he was told that he was free to go after now being sentenced to attend anger management classes during the upcoming 9 months of probation he was set to begin. Minutes after his release – he was observed on surveillance cameras attempting to steal 26 different vehicles in the parking lot for the jail, including 2 sheriffs office vehicles.   He could be seen grabbing the handles, attempting to break in, even getting so far as trying to hotwire one of the over 2 dozen cars, ATV’s, pickup trucks in the lot. When confronted by police officers he didn’t even try to lie or spin this in any way at all. He straight out admitted he was trying to steal a car as a way of getting home. He was re-arrested, brought right back into the jail he just been let out of, now with a slew of new charges: 26 counts of attempted burglary (one for each car he tried to get into) 1 count of grand-theft auto, one of auto burglary – oh and a count for violating the demands of his parole.

Hi everyone! This is my homily for October 13, 2019 – 28th Sunday in Ordinary Time. The readings for today’s Mass can be found HERE Thanks as always for reading; particularly grateful for sharing this blog on your social media sites; and your feedback and comments. I appreciate it! Have a great week – God Bless – Fr Jim. AUDIO . Also you can get the audios of the homilies from iTunes as a Podcast: https://itunes.apple.com/us/podcast/fr-jim-cherns-homilies/id1440618142?mt=2

The headlines kind of captured people’s shock at this ridiculous story: “Darwin Olympics: Guy just released from jail tries to steal car” “Does this qualify as the worst time and place to steal a car?” To the very blunt and direct: “Moron of the Morning.”

Besides the idiocy of the crime, what made it international news (it was amazing seeing the story online from all these other countries and languages – “A peine libéré, il tente de voler une voiture sur le parking de la prison”) What shocked reporters, commentators was the absolute lack of any change in this man. Now it’s a sad statistic that a large number of people who have made bad choices which resulted in their ending up in the criminal justice system often times find themselves ending up there again. But that usually happens long after someone has been released from prison, not in the jail parking lot! Imagine, or try to picture this scene. The guy literally walking out of the jail into the parking lot – still adjusting his street clothes after leaving the prison uniform behind… taking steps away from that place of confinement, a place of fear, and anger and probably all kinds of negative things we can’t (or don’t want to) imagine – and his reaction is “let me try to steal a car” – let me engage in an activity that will result in my returning right back to the place I couldn’t wait to get away from –   it’s hard to wrap our minds around that. It’s more than stupid – It’s more than arrogant – It’s the height of being ungrateful for this freedom after this imprisonment.   It seems like nothing has changed for him at all, and in a sense, the fact that minutes after being behind bars he was back there again, I guess you could say that’s actually the case. 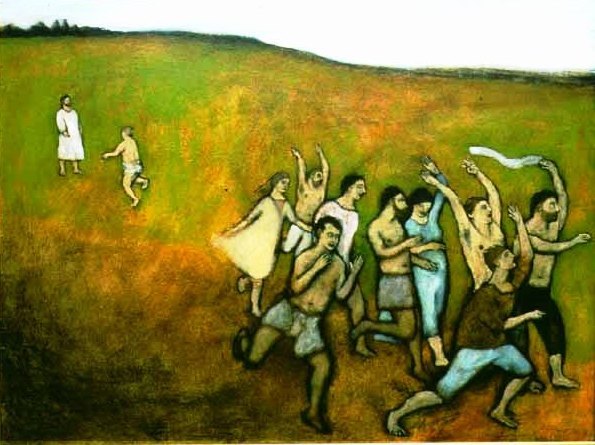 I guess that’s why that story from the summer came to mind when reading this Gospel. Because those are some of the same observations you could have with these 9 lepers who were healed and don’t return to Jesus. This scripture passage isn’t meant to be an etiquitte lesson.   This encounter is more than just about how to be polite like Mom and Dad or Miss Manners explaining“When someone cures you of leprosy you say thank you.”   Leprosy is a horrific disease, in many cruel ways it imprisons its victims. But unlike criminals dealing with a punishment for some infraction, for a leper it’s not their fault, it’s not their bad choices or sins that resulted in their being struck with this incurable, debilitating, vile illness. This sickness was so gross, so contagious that those suffering from it were separated from their loved ones, their community. They had to be isolated and forced to live with fellow lepers. It was such a frightening and dreaded disease that a leper would have to wear a bell around his or her neck – like an animal – so that those who weren’t sick could hear or know when one of those ill with this disease were coming near them. That’s just a brief description of the living hell that these 10 lepers had experienced. We can’t even really imagine the physical, emotional, psychological and spiritual pain they had experienced.

In this Gospel we read that this group of 10 hear Jesus is coming through their town on his journey. They’ve heard so many things about Him and so they try to get near to him. As near as they can, being in their condition -physically weakened and socially estranged as they see the glares, hear the worried whispers of the townspeople when they witness that this group has happened to show up.   So they stand at a distance. This group of 10 gets within ear shot and cry out: “Jesus, Master! Have pity on us!” What a prayer! Think about what they were asking for or thinking: Not a cure. Not a healing. Pity – they felt bad about themselves, their condition, their situation and they simply wanted Jesus to empathize, and feel bad for them. They didn’t even hope or imagine or dream that anything could happen for them.

But Jesus saw them. When Jesus sees them – when Jesus sees us – He’s not in the pity business, like “yeah, yeah – I’m sorry your having a rough time…” He sees their pain. He sees their desolation – He sees their despair. He sees their lack of hope.   You can imagine the love in His heart, His mind, His face – welling up as He smiles back with a wink saying “Go show yourselves to the priests” – the very ones that the society had empowered to determine their illness and banish them from the community.

Miracles don’t necessarily have to be big, dramatic moments that stand out like a burning bush or walking on water. God’s intervention in our lives often happens simply as we’re living our lives. And that’s what happened. As they do what Jesus tells them, they experienced a miracle. A bonafide, awesome, life-changing, family changing, community changing miracle simply as they walked. But while they were now freed from this illness which had physically, emotionally and spiritually imprisoned them – for 9 of the 10 while the leprosy was gone – they’re still ill, they’re still imprisoned emotionally and spiritually. They don’t allow the miracle to sink in – to change them. Instead they allow the desolation and isolation to remain.   Maybe letting fear or worry to undermine the gift as they sow seeds of doubt wondering “maybe this is temporary… maybe it’s going to come back”   Maybe letting self-centeredness rob the joy of this anything but ordinary day: “now that the leprosy is gone I can go back to my life I lived before…” 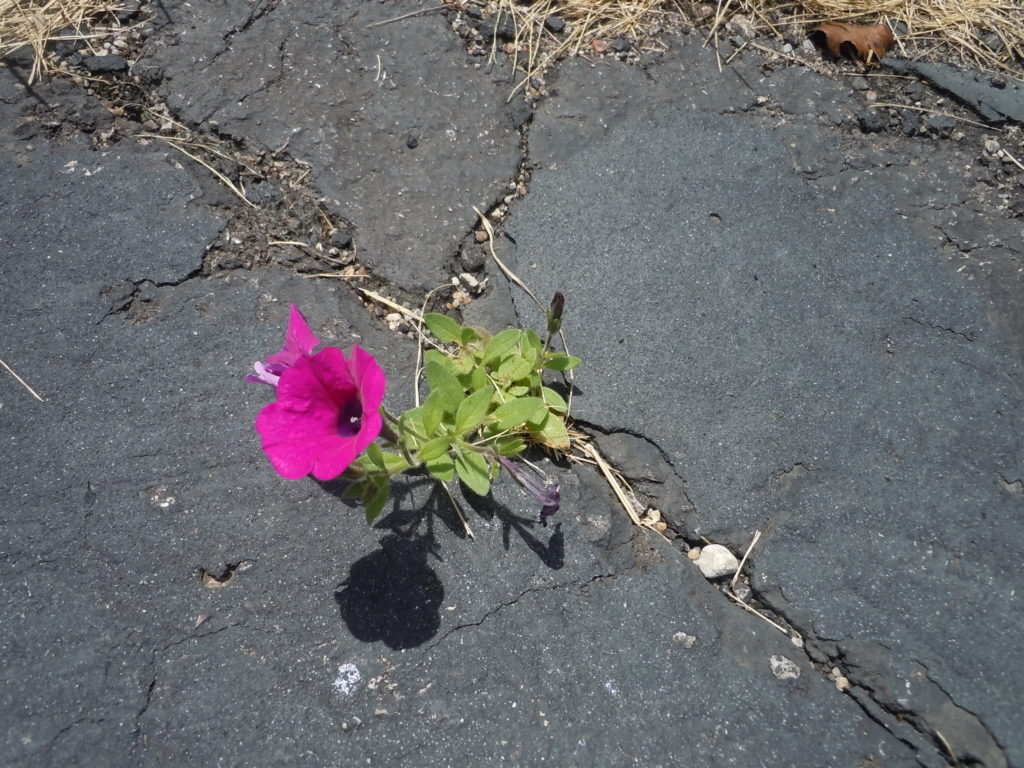 The point of prayers being answered the point of a miracle is that when they’ve happened, when we experience them, we don’t ever want to go back to our life before. We recognize that Jesus brings healing, restoration… that he makes the impossible, possible. That he demonstrates time and time again he is bigger than the biggest fears, the greatest trials, the most insurmountable of obstacles.

The one guy gets it. The one guy realizing it, stops and says to the other 9 – woah… we’re healed…we’re not lepers anymore… that Jesus guy didn’t have pity on us, He healed us. We don’t have to live like this anymore! His return was more than just a polite gesture – it was a declaration of faith. As he realizes what has happened, he glorifies the God who has done great things for Him.

Like the man released from jail – like the 10 lepers – we have been offered tremendous freedom. Jesus offers us freedom from the things that bind us, diminish us, limit us. He has worked and continues to work miracles for all those who turn to Him, who cry out to Him.   He doesn’t look on us with pity – but with love. What are the fears, the worries, the concerns that are weighing you down right now? What are the obstacles your facing? The people you’re praying for?

In a few minutes, the bread and wine will be brought up as they are at every Mass, purposely after we pray the “Prayer of the Faithful” – where we give voice to our intercessions for the Church, the world, the nation, our community – ourselves… and the extremes of great worry and great promise that rest in the deepest places of our hearts. When we look at the bread and wine come up, we look at the most ordinary, mundane, routine being presented to our loving Father – and we enter into a prayer of tremendous praise and thanksgiving – in fact the word Eucharist means thanksgiving – and know that in His goodness, in His greatness, in this Eucharistic prayer, Jesus becomes real and present Body, Blood, Soul and Divinity under the appearance of bread and wine. And even more remarkably, then that body and blood are offered, are given to us.

At every Mass we are invited to offer all of those prayers from those deepest recesses of our hearts – even more, we’re invited to offer our hearts, souls, body – our very selves in union with that bread and wine, placing them upon this altar. Trusting and rejoicing that the God who can take the ordinary and extraordinary – take the bread and wine and make it His very self – can, does and will – do extraordinary things for us.

But that’s something we have to let Him do for us. His gift of freedom is something that has to be received and utilized in complete freedom as well. The one grateful leper and the one bad prisoner turned worse car thief (along with the other 9 lepers) remind us of that reality. Will we rejoice in God’s gift and allow ourselves to be changed by it? Will we recognize the changes God is doing and allow our hearts to be overwhelmed by the lavishness of His love and movement in our lives? Jesus’ prayer is that we will. That we will set our eyes on Christ not returning to self-destructive patterns, nor allowing anyone or anything to distance us from Him.