A couple of summers ago, one of the great crazes among students at Montclair State University involved “Justin Bieber sightings.”  The rumors started that he had bought a house in town.  He was spotted over on Bloomfield Avenue coming in and out of different stores and eating at different restaurants…  people reported seeing him over at Trader Joe’s or Sonic Burger on Route 3.   Some students without any clue to where or when he might be somewhere (as far as I know they hadn’t hacked into his phone to track his GPS or anything) went out actively searching for him.   This is one of these areas that I’ve aged out of… that I just can’t relate to.  I try my hardest to keep up with college-age students likes/dislikes and keep current on things – but there are lines and limits.  Pop-music stuff is one of those. Honestly, if I was on a game show where a million dollar award would be given if you could name a Bieber song, I’d be a loser.

Hi everyone. This is my homily for September 8, 2019 – 23rd Sunday in Ordinary Time. The readings for today’s Mass can be found HERE Thanks as always for reading; sharing this blog on your social media sites; and your feedback and comments. I appreciate it. Have a good week – God Bless – Fr Jim. AUDIO . Also you can get the audios of the homilies from iTunes as a Podcast: https://itunes.apple.com/us/podcast/fr-jim-cherns-homilies/id1440618142?mt=2

All that being said, I have to express my admiration for Bieber.  He has been incredibly upfront and honest about his struggles with depression, with different addictions, with bad behavior and terrible decisions he’s made in the past.  Things that, sadly, are not uncommon for people who have achieved celebrity status at a very young age, like he did.   It’s devastating when you go through the list of former child celebrities who are reported to be going in and out of rehab as they struggle with full-blown issues with alcohol or drugs; or stories of how they’ve lost their wealth, health and status – some ending up in jail  or more tragically ending with suicides or accidental deaths…. 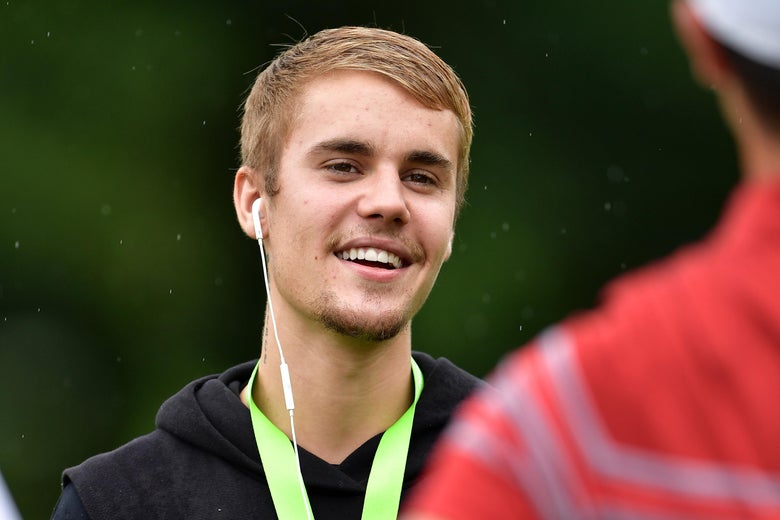 Justin Bieber thankfully has not been that far gone, but it hasn’t been easy for him.  This past week, he once again took to Instagram and was brutally honest in his public sharing, starting off saying “It’s hard to get out of bed in the morning with the right attitude when … it feels like there’s trouble after trouble after trouble … Sometimes it can even get to the point where you don’t even want to live anymore.” He talked about the difficulty of this last decade of his life saying:  “There is an insane pressure and responsibility put on a child whose brain, emotions, frontal lobes (decision making) aren’t developed yet.”   He confesses again: “I started doing pretty heavy drugs at 19 and abused all of my relationships.” But then shares his reason for hope – that he has been able to come through all of this thanks to extraordinary people in his life who’ve helped him develop a relationship with God.

So often different celebrities who have become infamous for some bad behaviors, controversies, criminal activities will talk about “finding Jesus” and say a few things that could have been scripted by a public relations expert to help spin those negative stories in a new direction.  But reading Bieber’s note, you hear a 25 year-old who’s faced more ups and downs then most of us can ever imagine…  He’s casting a light into struggles that many of his generation are dealing with – whether it be depression or addictions, self-doubt and negativity about themselves.  He’s not simply putting himself out there as some major success story that since finding Jesus that was the answer to every problem and he never had another bad day.  Rather, honestly and humbly he shares his story of one who is trying to follow Jesus which is much more of a challenge, much more difficult – and a life-long endeavor which is also much more authentic.

That’s an important distinction for us to make – the difference between finding Jesus and following Jesus.    That distinction is at the heart of today’s Gospel.   Throughout the gospels, we encounter stories of thousands of people who come out to hear Jesus preach, see a miracle, catch out what all the buzz there was about him.  But when he talked about what it meant to follow him they leave.   The miracles might have been cool – the preaching awe-inspiring, but following him – well Jesus seemed to be asking too much…

Today’s Gospel would definitely be one of those times.  Jesus starts off with that quote that’s as jarring now as it was two thousand years ago – If anyone comes to me without hating his father and mother, wife and children, brothers and sisters, and even his own life, he cannot be my disciple.  That sounds really harsh.  I mean, I’m an Italian Momma’s boy, so yeah, that kind of catches my attention.

Which is exactly what Jesus was trying to do.  He’s not re-writing the Ten Commandments where we’ve been told to honor our Mothers and Fathers – he’s using exaggeration to grab our attention because he’s about to tell us something central to being a follower of His and that is – Jesus Christ alone is the most important thing in our lives.  Nothing can distract us from our role as followers of Jesus.  And the rest of our lives flow from that.  Being his disciple has to affect – well, everything…  how we act when we go to class, how we treat our roommates (as annoying as they might be) or the people who are stuck in the same traffic as we are or our parents and families- it has to affect how we do our work – how we spend our time – all of our relationships.

That’s difficult.  At most, the world around us will tolerate people going to Mass on Sunday and keeping that to ourselves.  But following Jesus forces us to open our minds to recognize the things going on in the world around us, things that our society our culture, our institutions might say is good and acceptable in light of our following Jesus are actually contrary or different or dare we say it – even evil. That’s difficult. And it has been from the very beginning. 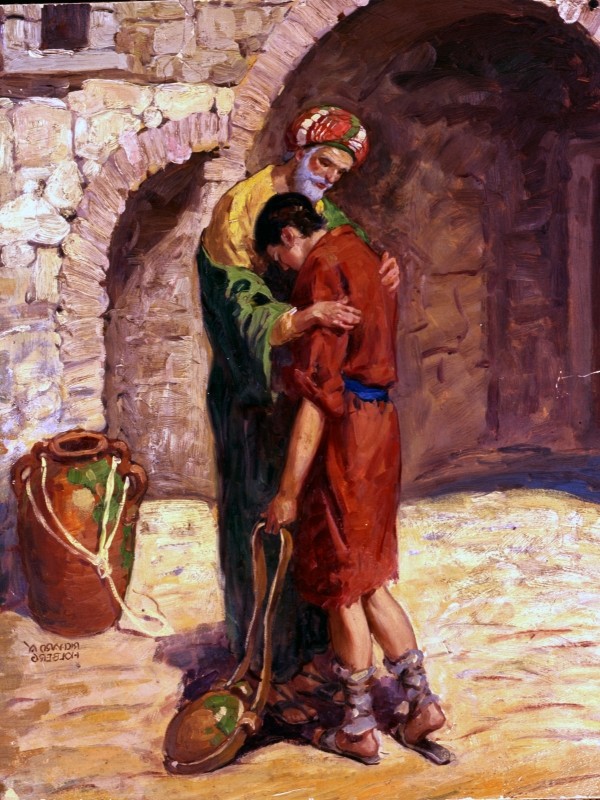 For example, in that second reading today, St. Paul tells a friend of his, Philemon, that even though slavery was an acceptable thing in society at that time, that because Philemon is a follower of Jesus he has to take his Slave Onesius and to love him as a Brother.   Following Jesus was causing Philemon to see Onesius no longer as his property, but as a person, like himself, made and created and loved by God and redeemed by Jesus.  A dramatic, life changing moment for both men. Which no doubt had ripple effects on many others of that time and space – to perhaps look at that evil institution of slavery in a whole new light. (Good fact to remember – in the United States, our end of slavery, the birth of the civil rights movement, all those things also came through the efforts of men and women who were following Jesus as well)

For Justin Bieber, you can hear and see how he’s had a dramatic, life-changing moment and is now trying to allow following Jesus to continue to guide and direct him.  How he is trying to see the blessings, the gifts, that the Lord has blessed him with; to let that change how he lives and acts as a celebrity who is constantly in the spotlight, as well how he acts as a husband, as a son.   And we should pray for him that he is able to persevere and continue to respond to the grace that has begun that good work in him (especially since there’s many forces of evil that want to see him fail).

What is it for us?  How is Following Jesus going to make us somewhat uncomfortable right now because we know in our heart of hearts that it’s going to require us to change the way we act or it means we might be seen as different or weird to the world around us. (maybe coming here tonight to Mass was something that made you feel a little like an outcast to your floormates, your roommates your friends or your family?)

Because that’s the choice,  that’s the challenge we face each and every day. Are we going to be one of the many who could claim found Jesus – we know who he is, we’ve heard the stories about him – we kind of look at Him as an obligation we have to check a box off every now and then to try to remain in “good standing.”   Are we going to live in that limited realm of just simply having FOUND JESUS or are we people who Follow him?

Following Him means the cross.  Jesus doesn’t beat around the bush on that.  And if we thought the line about hating parents and all that was shocking, that line was even worse for his original listeners.  They heard this before Jesus rose from the dead.  So the idea that being invited to follow him was in any way connected with the most gruesome of deaths the sadistic Roman Empire had come up with, was definitely not a crowd pleaser. So the ones who made that decision to follow him recognized there was something wrong with the world, something was missing in their lives and they could see and hear with the eyes and ears of faith in Jesus the answer to those things.  In witnessing Jesus’ death on the Cross and then His resurrection from the dead, they experienced the redemptive power that was unleashed upon the history of the world and understood how they could be a part of that by following Jesus’ example of selfless, sacrificial love themselves.  Following Him is still the answer to what is wrong in our world.  Following Him is the answer to finding what is missing in our lives…

St Pope John Paul II very beautifully put it like this:  “It is Jesus you seek when you dream of happiness; he is waiting for you when nothing else you find satisfies you; he is the beauty to which you are so attracted; it is he who provokes you with that thirst for fullness that will not let you settle for compromise; it is he who urges you to shed the masks of a false life; it is he who reads in your hearts your most genuine choices, the choices that others try to stifle. It is Jesus who stirs in you the desire to do something great with your lives, the will to follow an ideal, the refusal to allow yourselves to be ground down by mediocrity, the courage to commit yourselves humbly and patiently to improving yourselves and society, making the world more human and more fraternal.”

May we be courageous enough to answer Jesus’ invitation, and find in it the fulfillment that our hearts and souls seek – the true peace that every heart and soul desires.