Latest News
Home /Blog/WHO YOU ARE, WHO YOU ARE NOT & TRUE HUMILITY

A few months ago, a husband and wife’s marital debate went viral, becoming an international news story: A man by the name of Chris Marti who is a real estate agent in Texas, needed some new suits to upgrade his wardrobe for work. He had asked his wife Meredith to accompany him to the local Men’s Warehouse, where she went about picking out five new suits for him, which they left at the store to be altered. A few weeks later, as Chris went back to pick up the tailored suits he had purchased, he noticed that a new line of “spring” themed seasonal suits had just arrived. There it was: this bold plaid suit comprising multiple shades of blue that had caught Chris’ eye. Not only was Chris convinced that he needed to have this in his ensemble, but he was certain that his wife would love it.

Hi everyone. This is my homily for September 1, 2019  – 22nd Sunday in Ordinary Time. The readings for today’s Mass can be found HERE Thanks as always for reading; sharing this blog on your social media sites; and your feedback and comments. I appreciate it. Have a good week – God Bless – Fr Jim. AUDIO .  Also you can get the audios of the homilies from iTunes as a Podcast: https://itunes.apple.com/us/podcast/fr-jim-cherns-homilies/id1440618142?mt=2

Arriving home, excited at his fashion independence and adamant that he was going to impress his wife Meredith, he performed his own fashion show to model the new outfit.   The reviews weren’t glowing: “What are you wearing? You are not actually going to wear that out are you?” Whether he was shocked or disappointed by this reaction, he kept it to himself and became even more committed to his purchase saying, “I’m going to wear it all the time… it’s going to be amazing.” Meredith, however, continued to disagree and dismissed Chris’ new threads as being “loud and tacky.”

What happened next is what turned this into an international news story. Chris decided to hire a photographer to take pictures of him dressed in the suit, and then he purchased two giant billboards to display the photos of of him wearing the controversial outfit with two hashtags splashed across them: “#MyWifeHatesThisSuit” and “#SoIPutItOnABillboard.” For good measure, he also staged the pictures with him holding two furry plush animals, a garden flamingo, and a bouquet of artificial flowers. 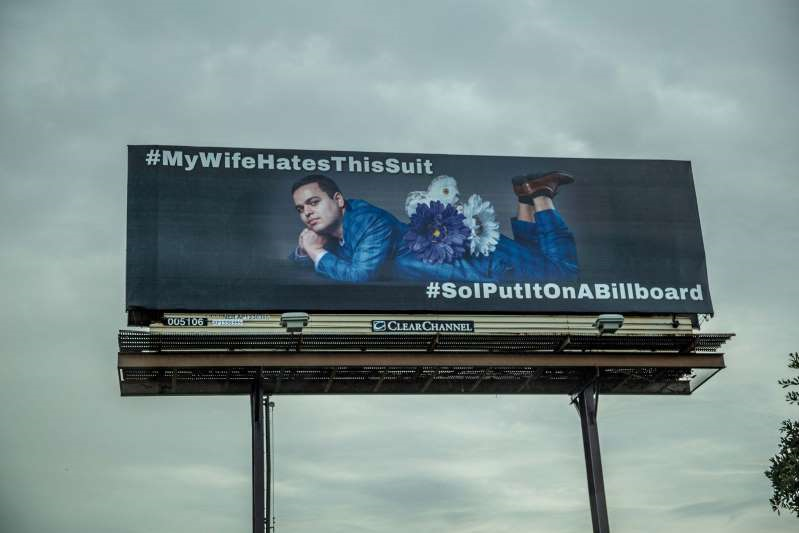 It turns out that while the disagreement was real—the wife truly does hate the suit and the husband does think it’s fantastic—this way of openly airing their dispute was also in line with their character. The couple are both practical jokesters, and Chris couldn’t wait for Meredith to be driving down the highway and to see her husband plastered on the billboard dressed in his suit.

Now if something like that were to have happened to me—I know… I wear mostly black suits, and that as a celibate priest, I’m not married—but if I had a new sweater, or a jacket, or the likes, and my mother said to me “What are you wearing?”, or my students deemed my outfit to be “loud and tacky”, I doubt that I would ever wear it again. So given that for most married couples, where the husband and wife are, among many other things, supposed to be each other’s confidant, I would imagine that most guys would’ve promptly returned the suit to the store they purchased it from (or their wives would have done so, and asked the sales people how they let this atrocity come to pass in the first place).

Which is why you can’t help but be impressed with this guy; Chris was completely comfortable in his own skin (and suit), and he was able to laugh at himself and even took the light-hearted quarrel one step further by put himself up on a billboard so that others could be included in the joke.

Knowing who you are—and who you are not —is one of the essential points that jumps out from Jesus’ parable in today’s Gospel. Because it’s easy for us to hear the word “humility” and “humbling ourselves” in this passage with a mistaken perception for what humility truly means.   For example, so many people go around berating themselves: diminishing their gifts, their talents, and their abilities, thinking that it’s better to be like that than be seen as boastful or braggadocious; all the while secretly hoping that someone else will notice these attributes and basically demand that we accept their praise and admiration. That’s not humility, that’s false humility.

Humility is rejoicing in who you are. Knowing what God has done for you, giving thanks for the blessings in your life. Recognizing and admiring the blessings that others have as gifts from God as well.

Humility is seeing how each and every one of us has been made in God’s divine image;

how each and every one of us is loved; and

how each and every one of us is unique and special.

Each and every single one of us has a place in God’s house, and we are all invited to dine at God’s table.

That is what was missing in the room of this dinner party that Jesus attended.   Right from the outset the Gospel tells us that “the people were observing him carefully.”   That’s a nice spin of what was happening. More likely, people were whispering and gossiping: “Isn’t that the guy…” ,“Who invited Him?” , “What is he doing here?” Maybe Jesus didn’t have the right clothes on, or maybe he wasn’t saying the kinds of things that people expected to hear at a dinner party. If that wasn’t the case at the start of the party, it certainly was by the end. Here, Jesus had been invited into this Pharisee’s home and instead of true hospitality and authentic, genuine welcome, there was judgment. There was making determinations of who he was and who he wasn’t – how he measured up (and failed to measure up) according to these other people’s terms… applying their own standards. 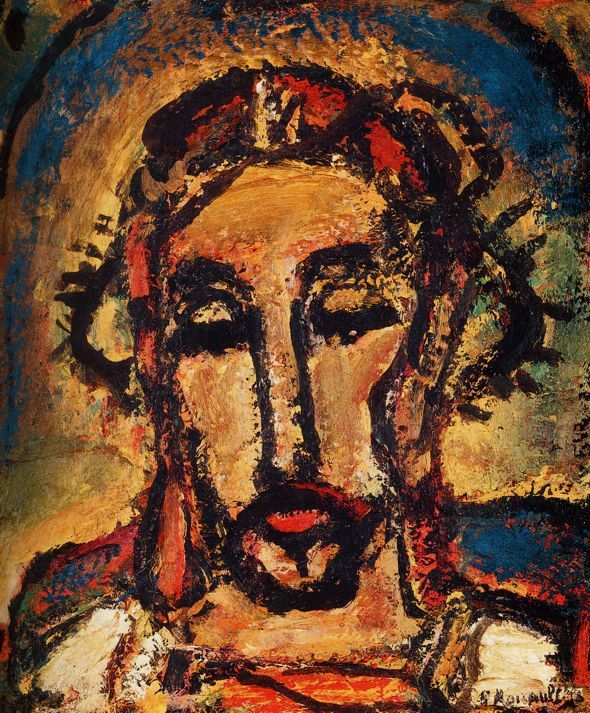 Jesus, knows who He is and who He is not: He is the Son of God; He is Emmanuel; He is God with us; and He is not going to be minimized or diminished by a room of people who are quick to dismiss and ridicule him because they do not understand, or appreciate, or want to accept the sacred and eternal gift that was placed right there in front of them. Their lack of humility and their arrogance clouded their vision and held them back from even considering the fact God was up to something incredible right there in that room. Instead, they were busy preoccupying themselves with how Jesus had upset their apple carts and what the long-term effect that would have on their positions. Their status blinded them to the greater potential that God could have wielded through each and every one of them.

Each of us gathered here in this place have been welcomed not just into any house, but into God’s home. We have been invited not just to any meal, but to dine and to feast on the most sacred of foods: Jesus’ very Body and Blood that we receive in the Eucharist.   But unfortunately we don’t always appreciate the specialness of those realities. We too often forget who we are and believe lies about who we are not… For example, it’s easy for us to quickly go through a list of reasons why we think we don’t belong or shouldn’t be welcomed here: We know our sins and our failures, and we know how we struggle with temptation. And too many voices want to join that chorus of negativity. How often have we heard voices say, “All those people who go to mass, they’re just a bunch of hypocrites,” or seen someone rolling their eyes, as if they’re asking themselves “What are they doing here?” It’s easy to let those struggles and listening to those destructive voices to warp our identities – concluding that we don’t really belong here.

We are here today in true humility, to remember who we are and who we are not. This the Good News.  Jesus has invited us, broken and imperfect as we are, He welcomes us, meets us where we are in order to heal us, to restore us.  He reminds us that we are not to be defined by any of our imperfections and that we are not to let our identity be determined by our mistakes. No – we are beloved sons and daughters of a loving Father; a Father who sent his only son to make us just so.  That has enabled us to take and receive his Body and Blood in the Eucharist…. Jesus has done that for us. Jesus has made us worthy. And when we allow that to sink in – when we recognize the intimate, personal love He has for each of us that allows us to be here; allows us to partake of this sacred meal; that has to change our vision of ourselves and the world around us.

We recognize that we have a divine calling – a sacred identity. God has gifted, equipped, and endowed us to be His hands and his feet. Not because we’re better than anyone else, but because He is.   He has poured out His blessings and His favor upon us so that we may be a blessing and share that favor with those most in need.

May you and I be bold, be confident, and be thankful to wear the “baptismal” suits that we received that day we first became Jesus’ new creation in those healing, life-giving waters.   Humbly recognizing what a free gift this is, wearing it proudly as an invitation to the world to come and see what our God has done for us, to receive, and to experience the lavish love of God themselves.