Latest News
Home /Blog/HISTORY HAS ITS EYES ON YOU

Two Christmases ago my brother gifted my Mom and I with tickets to see Hamilton on Broadway. Well technically speaking, as he handed the us the tickets, he informed us we were “done” for Christmas, our Birthday’s, and any other important event where gifts might be exchanged for the next year. That’s understandable. Tickets to this musical telling of Alexander Hamilton’s role in the story of American independence and foundatin as a democracy has been one of the hardest tickets to purchase in the last 4 years that it’s been playing. Truth be told, I really didn’t have any desire to see it.   I’m not a hip-hop fan (which is the primary musical style for the show); and trying to imagine a three hour history lesson set to that type of music didn’t seem like the recipe for a fun outing. But I couldn’t have been more wrong. Hamilton is definitely one of those things that exceeded all of the hype.

Hi everyone. This is my homily for August 18, 2019 – 20th Sunday in Ordinary Time. The readings for today’s Mass can be found HERE Thanks as always for reading; sharing this blog on your social media sites; and your feedback and comments. I appreciate it. Have a good week – God Bless – Fr Jim. AUDIO Also you can get the audios of the homilies from iTunes as a Podcast: https://itunes.apple.com/us/podcast/fr-jim-cherns-homilies/id1440618142?mt=2

You got the sense of how popular this has become even before you got into the theatre.   The line waiting for the performance had this huge number of kids – middle school age through college. Standing out there, you couldn’t help but hear them singing complete scenes for the show and even throughout the performance, some of them got so caught up with it they were singing or mouthing along with the actors.   What is it that makes this so compelling for so many?   Obviously, the unique combination of music, choreography, staging, an interesting story with all kinds of twists and turns are essential to its success. But it also resonates on a much deeper level for people. It’s more than just entertainment, more than just appreciating the artistic contributions of so many from their creators to the actors performing 8 times a week. It’s the message. At its heart Hamilton claims that one person can be essential to the course of History being changed. “History has its eyes on you…” the characters intone throughout the performance.   When they ask – “Who lives, who dies, who tells your story? Will they tell your story?” that isn’t just directed at the characters on stage, but it’s a challenge to the audience as well.   The story of how you made the most of the one “shot” that everyone gets. The “one shot” that is our lives.

The dramatic telling of Hamilton’s ups and downs, his successes and setbacks is contrasted with a contemporary of his, Aaron Burr, who approaches everything with incredible caution, calculates every possible move and thinks (and over-thinks) every move, to the point of continual inaction.   As Burr is advocating this safe approach to his peers, Hamilton pointedly asks him “If you stand for nothing Burr, what’ll you fall for?” right before Hamilton launches into how he’s going to make the most of his shot.   Obviously Hamilton is more successful as the show not called “Burr the musical.” You couldn’t help leave the theatre feeling the energy and excitement, and the enthusiasm, especially of the youth as they kept singing those refrains. 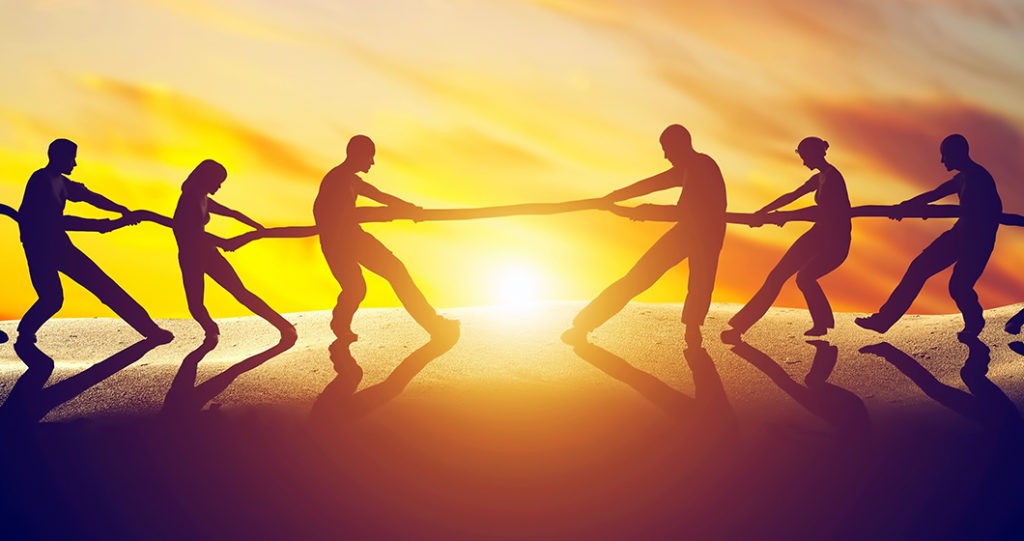 Reading this gospel, the fire, passion, and challenge of those lyrics asking “if you stand for nothing” kept coming to mind. Because that’s what Jesus is asking his listeners. Which is why it’s a bit startling for us. So many of us have grown accustomed to very comfortable descriptions of Jesus – like His title as “Prince of Peace” – and zero in on scriptures that would fit that narrative. If that’s our perspective, today’s Gospel is a bit of a shock: I have come to se the earth on fire… and even more pointedly – do you think I have come to establish peace on the earth? No I tell you, but rather division!   This is one of those passages we might want to dismiss as a one off. Jesus must’ve had a rough day.

But no, He isn’t having a rough day. Yes He is the Prince of Peace. But here’s the thing – true Peace isn’t going to come about being fake or phony… Jesus’ Peace isn’t possible with compromising with values contrary to God’s.   Jesus’ call is universal but He isn’t going to water down his teachings to be universally accepted.

If you stand for nothing…   We’re left with a decision to make. And following Jesus is a choice… and not a “one and done with” choice – like we’ve been Baptized, we’re here on a Sunday, so our “membership” is current and up to date. No, It’s a choice that we renew every day.

St Paul told us how we do that in the second reading, we have to rid ourselves of every burden and sin that clings to us… Right there that is divisive. There are many in our world that reject that anything is sinful or have warped sin to mean something benign as “not being true to yourself” – rather than seeing sin as a rejection of God, His commands, His order for His creation. Following Jesus means taking a stand against sin. That’s a clear, and divisive stand.

Paul continues on by telling us to persevere in running the race- keeping our eyes fixed on Jesus.… again that is divisive and sets us apart from the world. Because what are His priorities, His concerns? The hungry, the poor, the homeless, the sick, the imprisoned. Jesus tells us they are our brothers and sisters and in serving them, we serve Him, we encounter Him. That’s different from the view of the world that at best looks at those same people as problems to be dealt with (sadly, more often they are ignored in pursuit of self-centered needs and wants).

The Gospels tell us that from the moment Jesus’ coming was first announced by the angel Gabriel to the Blessed Virgin Mary, there was an anxiety among the rulers of the world – both religious and civic. His mission to save humanity once and for all from sin, from death – reconciling humanity with God the father and making us His beloved sons and daughters once again… making you and I brothers and sisters in Christ – it sounds like the perfect recipe for peace. You would think one who wants to unleash that type of fullness of life on a universal level would be welcomed.

But the reality is that not everyone wanted a savior. Many still don’t. The powers that be weren’t willing to let go of their self-interest in favor of the message of selflessness that Jesus would demand. The pursuits of power, wealth, and prestige were too tempting to abandon in favor of calls to sacrificial love. Which is what we see in the crucifix. That cross, that “baptism” that Jesus was baptized with clearly demonstrates that no, there won’t be peace on the earth. There will be division. And that is scary to a lot of people. 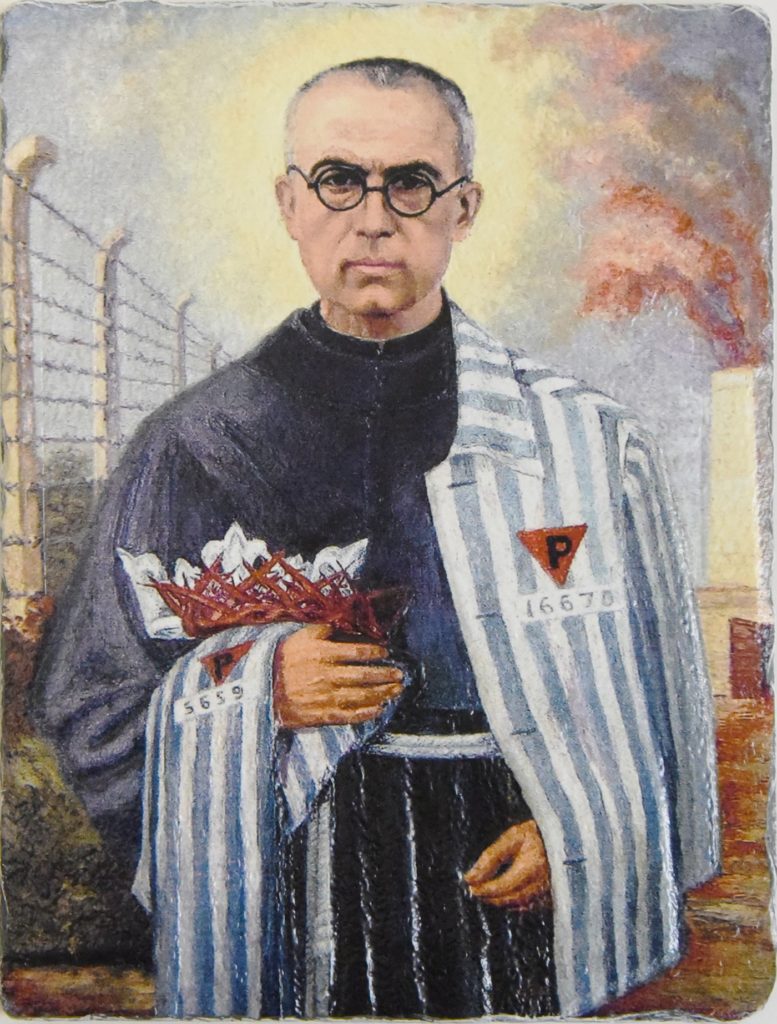 But that’s why that second reading was so perfectly paired with that Gospel message. Because we were being encouraged that if we dare to say we’re following Christ – we were told that we are “surrounded by so great a cloud of witnesses.” The countless number of saints who have made that same choice, who are honored and admired by us for how they did that in the thousands of years since Jesus first waked on this earth. They are men and women who are now a part of God’s eternal history. They lived, they died… we tell their stories – and their lives told Jesus Christ’s story. Their following Christ was divisive to the world – but the history of the world was forever altered by their making that stand. Just think about a few of them – St. Francis of Assisi, St. Mother Teresa of Calcutta- those are two of the most respected names in and out of Catholicism. Their radical living of Gospel values in taking care of the poorest of the poor not only addressed people’s urgent needs but also humbled, inspired and transformed countless others to do the same centuries later. St. Maxmillian Kolbe had a very different story. He was a Catholic priest who helped hide and saved thousands of Jews during the Holocaust. All three of these Saints were not universally loved. There was all kinds of division against them. Francis was disowned by his father and constantly at odds with both civil and Church leaders… Mother Teresa, go to the sewer that is the internet and see how people still try to malign her and her work (on second thought don’t). Maxmillian Kolbe was sent to Auschwitz for what he did, where he offered and took the place of a Jewish father who begged that his life be spared.

They are all apart of the cloud of witnesses. They are part of the History that now has it’s eyes on you, and me…   But they are loving eyes. They are encouraging eyes, rooting for us now to make the most of our one shot.   They are cheering us on to recognize we too are called to be Saints. That fire Jesus has set on earth – it’s up to each of us to bring about his hope that it blazes here and now.   When we grow weary,we’re to remember their example and knowing it is possible for us to. When we lose heart, we’re to remember how in small and big ways their choices, their decisions, the stands they made altered the course of history. It’s now up to us to use the unique gifts and talents we possess; and to embrace the opportunities that we encounter to unleash in creative ways Jesus’ love and presence in our homes, our neighborhoods, our families, our schools and workplaces.

History has its eyes on you and me. What will be our story? Will the story of our lives share His story?