At the end of your life, what will you recall?   Kind of a loaded question, isn’t it? It’s kind of an unfair one too. Here it is in the middle of August – most people are upset with thoughts of the end of summer, the last thing we want to think about is the end of our lives.  A week ago, the TODAY show posted on their website an interview with a doctor who works in Hospice care – which is specialty care for patients who are dealing with terminal illnesses or diseases.. The doctor shared her thoughts in attempt to guide people in “how to avoid regret” with the title of the segment: “What a doctor wishes people knew about living, dying well.”   Probably most of us could imagine what was going to be said: The need to cherish every day as a gift. The reality that tomorrow is not a guarantee.   The observation that many people who knew their end was coming were upset that they worked so hard or didn’t stay in touch with friends or didn’t choose to live a happier life. Dr. Miller observed: There’s usually regret about having been unkind and selfish. It’s shame around having ever been a jerk to anybody, including to oneself. The interview contained a lot of those types of reflections which you’d expect from someone who’s daily work is with people confronting their ends. How many people who’s life was diminished because of lack of forgiveness or anger? How much time was wasted on fears and worries?

Hi everyone. This is my homily for the ASSUMPTION OF THE BLESSED VIRGIN MARY August 15, 2019. The readings for today’s Mass can be found HERE Thanks as always for reading; sharing this blog on your social media sites; and your feedback and comments. I appreciate it. Have a good week – God Bless – Fr Jim. AUDIO .  Also you can get the audios of the homilies from iTunes as a Podcast: https://itunes.apple.com/us/podcast/fr-jim-cherns-homilies/id1440618142?mt=2

I’ll be honest, it was pretty depressing to me. I don’t think that was the intention – but that sense of trying to live well, live decently because one day it’s all going to end, and you don’t know when that day will be – it could be tomorrow – isn’t exactly inspiring for me.  That’s not to dismiss the importance though of that question – at the end of your life, what will you recall? But perhaps today’s celebration gives us a better approach to consider: 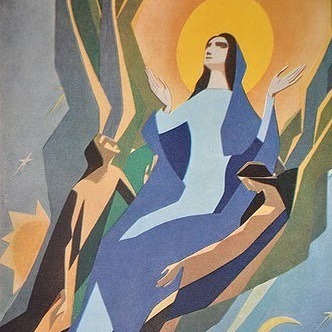 With the Assumption of the Blessed Virgin Mary we mark the end of her earthly life. From the earliest days of the Church, we’ve believed that at the end of her life, Mary’s body and soul was assumed into heaven. While the scriptures are silent on it, tradition (from which scripture comes from by the way) isn’t. From the earliest centuries, when those closest to Jesus were killed – the apostles, and the first martyrs of the Church – there was almost a jealous possession of those burial sites and their remains in the Church community. It was one way the people felt a connection to these heroes of the faith. That’s why in Rome you’ll find this most massive building called “St. Peter’s” above the burial site of the bones of St. Peter. From as early as the 4th Century, once Christianity became legalized in the Roman empire and there was a greater desire for the Church to trace and account for the holiest sites – it was expressed to one of the emperors that there was no grave or relics of the Blessed Mother because she had been assumed body and soul into heaven. One account tells how Mary died and was placed in a tomb, but that when St. Thomas went the next day to visit, the tomb was empty with lilies and roses left where her body was.

There’s a whole lot more that could be said about the origins of this belief, but, it’s important for us to stay centered on the Blessed Mother and to consider at the end of her life, what did she recall?

That’s was something that kept coming to mind looking at this scripture passage that we just heard. The Gospel is the story of   “The Visitation.” The Blessed Virgin Mary upon having the angel Gabriel announce to her the joyful news that she was chosen to be the Mother of Jesus, and she has accepted this vocation, this divine call goes to her older cousin Elizabeth.. Elizabeth had experienced her own heavenly intervention. She of advanced age… She who was said to be “barren”… who it was not possible that she and her husband Zechariah would ever have the child they had long hoped for and dreamed of… Was now pregnant as well with John the Baptist. And in the account of these two women coming together, Mary utters this poetic and sacred response which is called “The Magnificat” (which is Latin for the first line “My Soul magnifies the Lord”)

But the thing about that whole passage though, did you ever think about where it came from? St. Luke wasn’t there writing this down when this happened. There were no eye witness reports that were being used for this story to come to light. The only people mentioned here are Mary and Elizabeth. Which means that for it to have been here, Mary herself had to have recalled and shared this story with St. Luke and the early Church community. And the thing that stands out to me is that, the Magnificat is a hymn that priests, religious and people who pray what is called “the Liturgy of the Hours” every day has this passage committed to memory.  The reason we have this sacred hymn recorded is because Mary had it memorized as well, it was committed to her heart.   It was something that animated her entire life: 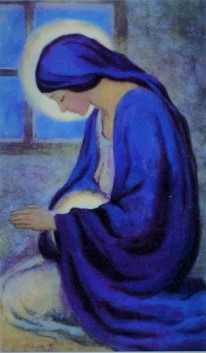 At the birth of Christ when there was no room for them at the inn – she still knew that God had favor on his lowly servant.

When her son Jesus was lost in the temple, she remembered how the Almighty had done great things for her…

As Jesus is betrayed, suffers the humiliation and torture of his passion, his crucifixion – things that indeed pierced her heart- she knew God would come to the help… remembering His promise of mercy – that was made to our fathers, Abraham and his children for ever.

No this gospel isn’t picked as “filler” for another Marian feast day with limited scriptural passages for us to utilize. The Magnificat – Mary’s song – while uttered historically at this moment of meeting for these two women

– was a tune that she knew before that moment…which was what prepared her to even being open and receptive to God’s invitation in her life. It was a song that she continued to voice – in every moment of her life, through moments of joy and sorrow, of uncertainty and confusion… She kept the refrain going where her soul proclaimed the greatness of the Lord… her spirit rejoiced in God her Savior throughout her whole life.

In that, Mary had no regret, no fears. At the end of her life, she recalled the only thing that matters. And the Almighty continued to do great things for her…

We, among the generations who call Mary blessed, who Jesus gave us as our mother – we look to her to be our model, our guide. May we follow her example in never ceasing to give praise to the greatness of God. Rejoicing in Him who in her Son Jesus has saved us, who looks to us to do great things with and in and through each one of us.