So today is a historic day for us here at Newman Catholic. It was 5 years ago that the Archdiocese of Newark officially purchased the house next door from us (pictured above as it looked that day before our work to renovate it) to alleviate over-crowding in the “Newman Center” and to help us expand out programming and outreach to Montclair State University. Working in this environment with college students, and the constant turnover of students, missionaries here – there’s no one here right now who experienced “life before Newman II” (apart from myself and our Office Manager Mary). That’s their experience of our community – that we have these two, beautiful hundred year old homes as our “Newman Catholic Center.” But when I think back about the acquisition of it, the only word that comes to mind is miraculous.

In the Fall of 2013 when our neighbor shared her intention of selling the home and offering us the opportunity to purchase it first – I instantly thought of how improbable this was for us. A few years earlier some very wealthy benefactors who had interest in a project involving our current center and developing the property into something that would have been of benefit for them, the University and the Newman Catholic Center. That would’ve been the ideal time for us to purchase the house…   In 2013, with that project not coming to fruition, those investors had moved onto other projects. And the Archdiocese made it clear that I could ask for consideration but to not expect a favorable response since they had already turned down numerous other projects because of financial difficulties.

I wrote my letter… anyone who’s received a letter from me in regard to a major project or initiative knows that I usually am very passionate about my reasoning, try to anticipate questions or concerns that might be raised and have justification, answers, and alternatives prepared in advance. But with this, I completely entrusted this to God’s will and providence. I was not only the chaplain and director of Newman Catholic, but was also the Vocation Director for the Archdiocese of Newark – so I had more than enough work to do. I knew that the purchase and care of another property, as great as it is, would be a lot of extra work that I didn’t know if I was up for. So my letter was a simple, one page letter, explaining succinctly and concisely the needs and the opportunity. One of the least passionate pleas I’ve advanced in my life. The letter is probably shorter than this blog post. I was already told that it was improbable and knew that it was certainly out of my control.

That’s why I was shocked when I got a response which wasn’t even a formal letter or notification, but rather a copy of my letter with the word “OK” and the Archbishop’s signature on the top.

The whole experience is a “transfiguration moment” for me – a time that I recall in my heart and mind where God revealed himself in a profoundly, unique way that I never anticipated or imagined. He showed up, He made a way – answered a prayer in a way I didn’t expect. He didn’t need me to do x, y or z – He needed me to be faithful, to be attentive, to be His servant. He would do the rest.

The fact that we officially purchased the house on August 5th, 2014 always struck me as unique. First off it’s the vigil of the Church’s celebration of the Transfiguration of the Lord (August 6) – where on the mountain top with Sts. Peter, James and John – Jesus’ appearance dramatically appears (described as “white as light”) – the Old Testament figures Moses and Elijah are seen speaking to Jesus and the voice of God the Father is heard saying “This is my beloved Son, listen to Him.”

But today itself – August 5th – the Church somewhat quietly celebrates something that was improbable as well. In the year 352 on this date, the Pope had been praying about a way in honoring Mary, the Blessed Mother of Jesus. During his sleep, Mary appeared to him and directed him to build a Church dedicated to her on a hill in Rome. She said that snow would fall on that hill to mark the spot where that Church should be built. Snow… In August… In Rome, the average temperature is 75-80 degrees. So snow falling is improbable.   Yet, on August 5th in 352, it fell on the Esquiline Hill in Rome – and built what remains to this day as the Basilica of St. Mary Major in Rome – the oldest known Church dedicated to the Blessed Mother. On the Church calendar today’s listed as the Dedication of the Basilica of St. Mary Major – but I prefer the other title, “Our Lady of the Snows.” 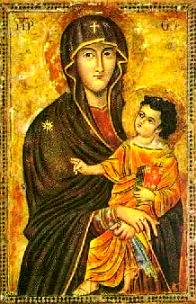 seemed so unlikely to happen… while at the same time, I reflect on my prayer list, my intentions, the things that I’m still struggling to truly relinquish control over and wonder how things will work out with one situation or another. I realize God gives us these reminders. He wants us to reflect on His history of goodness. How he makes the improbable possible. Sometimes it’s in dramatic ways that alter the whole course of history: like the Blessed Mother’s own story of being invited by an angel to conceive in her womb while maintaining her virginity the Son of God Jesus Christ. Sometimes it’s a more temporal need, like a house generously purchased for college students ministry.