Latest News
Home /Blog/IF YOU HAD A WEEK TO LIVE, WHAT WOULD YOU DO?

Hi everyone. This is my homily for June 23, 2019 – THE SOLEMNITY OF THE MOST HOLY BODY AND BLOOD OF CHRIST (Corpus Christi). The readings for today’s Mass can be found HERE Thanks as always for reading; sharing this blog on your social media sites; and your feedback and comments. I appreciate it. Have a good week – God Bless – Fr Jim. AUDIO   Also you can get the audios of the homilies from iTunes as a Podcast: https://itunes.apple.com/us/podcast/fr-jim-cherns-homilies/id1440618142?mt=2

The other night when the hit-TV Sitcom The Office was on, (it happens to be on a lot, for me) one of the characters, Pam Beesly, answering that question, said “If I knew I had a week to live, I would… probably go to Europe. And South America. And the Grand Canyon. And… I would want to see the Pacific Ocean. …It would be a pretty busy week.”  I know personally when that question has been sprung on me, I’ve never been satisfied with my answer. Perhaps because – thankfully – it has always been a hypothetical thing.  But the pressure to come up with something dramatic and unique – to be reflective, and vulnerable enough to reveal things that touch your deepest, most unfulfilled desires, can be summed up in this discussion.

That question though and those thoughts have been on my mind recently, and not simply because of that brief scene from The Office the other night. Back on May 25th, I saw a picture online of a priest named Father Michael Los elevating a host from a hospital bed.  A few clicks later and you learned that the young man had been in formation to become a priest in Poland when, a month before the picture was taken, he had been diagnosed with cancer. The prognosis was not good.  With only weeks to live, what did he want to do? He wanted to be ordained a priest and to celebrate Mass. The extraordinary request went to Pope Francis and was granted.  Right there in his hospital room, confined to his sick bed, he was ordained a priest… he offered his first priestly blessings – and he offered the Holy Sacrifice of the Mass. 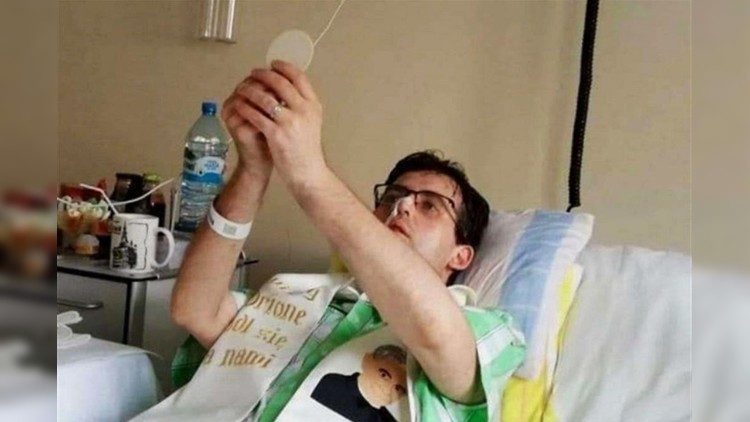 It was hard not to be filled with a lot of emotions just seeing those pictures back in May which was right around the time I was marking my 20th anniversary of being ordained a priest – or again this past week when it was announced that Fr. Michael had passed away.  In so many ways the story was tragic and heart wrenching – as any story of a young person’s life ending so early would be. But, in even more ways, the story was inspirational and so incredibly counter-cultural – as all of us know only too well in this day, in this age, in this place.

Especially now.  Now that it’s been a year since we first heard stories of our disgraced former-archbishop, Mr. Theodore McCarrick’s abusive, predatory behavior against children and adults which ultimately led to an explosion of scandalous stories, and his being laicized as a priest in February.  The list of things that have come to light this past year are too many and too depressing for me to recount them again here. Hearing and learning of the abuse by clergy… of the cover-up by clergy… has plunged the Church into a crisis.

Not surprisingly, one reaction has been for people to leave the faith altogether – even priests leaving the priesthood.  A few weeks ago, one priest who had been pretty recognizable as a television commentator and author announced he was leaving the priesthood after almost 15 years of ministry. It’s always sad for me when that happens.  Having almost left the priesthood myself 13 years ago, I can relate to the space this man must have been in, and I don’t judge him or his decision.  But sadder still, for me, was seeing the widespread acclaim and support he got for his decision.  To me, I empathize with his struggle and support him in his search for peace, but seeing the general consensus of people congratulating him and calling his actions brave and even courageous – that was jarring for me, personally.

When I reflect on the monstrous behaviors of the abusers and of those who were accessories both during and after the fact – I can’t imagine that the people who did these things concerned themselves much with questions of eternal consequence, like if they only had a week to live.  Because if they had done that, they would have (rightly) worried about their own souls, and the souls of those they sought to destroy. When I think of the many people, lay and clergy, who’ve already left our church – so many of them have done so because they didn’t think they could find anything here that could possibly ‘counter balance’ the incredible evil they’ve witnessed (which, I believe, will be yet another thing the abusers will have to answer for). Some of those who’ve left can’t believe, don’t believe, aren’t sure if they could ever again believe anything that is said or done in this church, in this place that is supposed to speak to things of eternal significance.

Which is why – once again – I want to thank you all for being here today. It isn’t easy. From my informal polling – those who do find themselves here, still, after all we’ve heard and been through – do so with mixed thoughts But praise God – you’re here, we’re here.  And into that space of mixed feelings we once again celebrate the greatest gift we receive as Catholics. Jesus’ Real Body and Real Blood under the appearance of Bread and Wine, that we receive in the Eucharist.  Our thoughts, our minds, our hearts are meant to be drawn into this mystery that we celebrate at every Mass ever more deeply on this special feast day of Corpus Christi, Latin for The Body of Christ. It’s Jesus everlasting gift to His Church of every generation of His abiding, His loving, His selfless gift of Himself – to every single one of us who draw near to this altar. Approaching this altar – well aware of our own sinfulness, our brokenness  our unworthiness – Jesus, the living Son of God, tells us he desires  us to receive His Body and Blood so He can enter into our body and blood. He wants to nourish this our earthly life, each and every day, and join it with Himself – to prepare us for an eternity with Him.

At the core, that is what has drawn people throughout the centuries, when men and women within the Church scandalized and failed the people entrusted to them before – and that is one reason we still come here, today.

Interestingly, of all the Gospels that could’ve been used for this feast day – one of the Last Supper narratives, or John’s Bread of Life discourse – instead, today we hear from the Gospel of Luke, about Jesus feeding the multitudes.  And the more I read it, the more appropriate this seems this year. In the scene immediately before this passage, Jesus had empowered and entrusted the Twelve with His mission, to proclaim the Kingdom of God – to heal the sick – to participate in Jesus’ very act of salvation for the world.  But, at the sights of the crowds, recognizing their needs and desires, on their very first day on the ‘job,’ the Apostles immediately fail the people they’ve been commissioned to serve.  They are defeatists. They either don’t believe, or don’t fully understand what Jesus is asking them to do to serve His people.  They immediately point to their pathetic, meager provisions – to their own inadequacies – on the Gospel page, they are practically shrugging their shoulders and giving up.

Ultimately, it is Jesus who takes those inadequate provisions and fulfills the needs of the crowds. And that is why this Gospel is offered today.  In the Eucharist, we remember that it is Jesus who continues to make his very Body and Blood, His Real Presence real, despite those who fail Him and His people. It is Jesus who provides the abundance.  It is Jesus who gathers all those threatened to be scattered by the sins of those supposed to be His followers.  He does all of this so we can realize that, in every moment of our lives, God sees us… He loves us… He provides for us. And He will show us a way, even when the path before us looks bleak.

Father Michael Los couldn’t imagine a more important goal, or a greater way  to spend his last moments on earth than to focus on Jesus Christ.  Faithfully serving the Lord and His people – even for such a tragically short period of time – was what he wanted, more than anything.  In spite of the corruption, despite the self-inflicted wounds of a floundering church, Father Los knew that didn’t matter. What did was Jesus Christ – that was worth fighting for, literally, with his last breath: offering the Eucharistic sacrifice for the people of God.

For us here today, here celebrating the gift of the Eucharist… here to receive that same Eucharistic sacrifice – May we be blessed with that same clarity of vision – to see with the eyes of faith exactly how precious this gift is Jesus offers us with His Body and Blood. Remembering that when He had a week to live, Jesus’ vision was no different than the rest of His life: you and me… and everyone of God’s people.   Nothing else mattered or matters to Him. May our reception of that gift, be truly appreciated and inspire us to reciprocal love – where we long for Jesus and Him alone.