The headline seemed to come from the worst of conspiracy theorists. You know the ones saying that “they” (whoever “they” are) already have a cure for cancer, diabetes or countless other diseases—but they’re hiding it because Big Pharmaceutical companies would lose massive profits. But there it was in the Washington Post earlier this week: “Pfizer had clues that its blockbuster drug could prevent Alzheimer’s. Why didn’t it tell the world?”

Hi everyone.  This is my homily for June 9, 2019 – THE SOLEMNITY OF PENTECOST. The readings for today’s Mass can be found HERE Thanks as always for reading; sharing this blog on your social media sites; and your feedback and comments. I appreciate it. Have a good week – God Bless – Fr Jim. AUDIO   Also you can get the audios of the homilies from iTunes as a Podcast: https://itunes.apple.com/us/podcast/fr-jim-cherns-homilies/id1440618142?mt=2

The article printed out to over 10 pages, offering speculation, sharing statistics, explaining the theories that researchers have come to in the decades they have tried to combat this disease. But in short, there is a drug that the company produces called Enbrel, which is used to treat a completely different chronic illness. But four years ago, a team of researchers claimed that this pill could reduce the risk of Alzheimer’s by 64%, stating they were convinced that the drug could “safely prevent, treat and slow progression of Alzheimer’s disease.” After you got past the official public relations statements from the company disputing that claim—and read further explanations about patents and competition between drug companies—there was this anonymous quote that the reporter attributed to a former Pfizer executive. Why didn’t they share this information? He says “I think the financial case is they won’t be making any money off of it.”

I don’t want to be cynical or naïve—neither seems appropriate for a man of my age, who is also a priest. But I had both reactions (as well as a few others) from the moment I read the headline and on through the rest of this week as I read the story or thought about it. Surely, they wouldn’t hold back a potential blockbuster cure for this debilitating illness that has devastated families because of a profit chart? These drug companies have employees who are suffering from this illness or they know people who are—of course they would want to help them if they could, right? This could be a life-changing gift, why wouldn’t they share it?

Sadly, the article didn’t give any other plausible explanation. There weren’t interviews with the executives who withheld the information. There wasn’t a response from the leaders of Pfizer saying that, now that this news has come to light, they will conduct new research—or disclose fully whatever they already know so that it could be of help to people sooner rather than later. It is infuriating. Granted—scientific experimentation and discoveries are rarely cut and dry… so to give Pfizer the benefit of the doubt—it’s possible this could turn out to be just another example of the media trying to create news rather than report it. But Pfizer needs to do more than issue some general press release dismissing the possibilities being discussed. Because otherwise we’re left jaw-dropped by the callousness of their refusing to answer that question: why not share such a life-changing gift?

Perhaps it’s human nature. Maybe we shouldn’t be naive or cynical — but at the end of the day, it comes to a fundamental and common question: if we share something—anything—what is the cost? And often times, that determines whether we’re going to act or not.

Today, the Church celebrates the Solemnity of Pentecost. Like all the big events in the Church, there’s a lot to this celebration. If you were in my CCD class you’d remember the teacher bringing in a cake to remind us it was the Church’s birthday (I particularly remembered that because it was an Ice Cream cake… you want a fourth grader’s attention, Mrs. Damiano knew—bring in an Ice Cream cake). You might have heard in years past that this is the end of the Easter Season—that the word “Pentecost” means 50 days—so it’s 50 days since Easter.

Both are true aspects of the day—but they can kind of distract us from what is most essential. God the Father who created all that is; God the Son, Jesus Christ whose very life, death and resurrection brings salvation to the entire world; on Pentecost, we focus on God the Holy Spirit and recall how He is poured out in abundance on the Church: the Church as a single body—and each and every one of her members.   Of the three members of the Trinitarian God, the Holy Spirit is probably the most mysterious… just looking at the different scriptures for today—we hear Him described as a strong driving wind, tongues of fire, immediately transforming those who receive Him. Just consider some of the dramatic and diverse ways that happens: 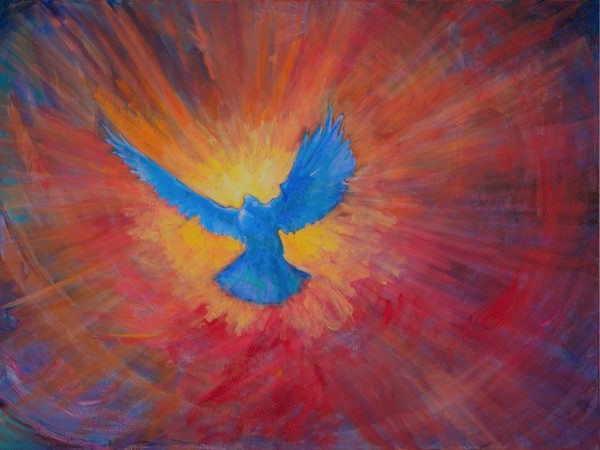 The Holy Spirit’s gifts empower those first disciples to become Christ’s hands and feet, voice and heart—they go from weak, confused, scared individuals to strongly, eloquently, boldly sharing the story of salvation of Jesus Christ with the world. He convicted them of the truth of all God’s promises—reminding them of all that they themselves had experienced and learned—and igniting them to go forth passionately and share what they had received.   The Holy Spirit strengthened the early Church in unimaginable ways to endure horrendous persecutions. The Holy Spirit has encouraged men and women of every generation, from the first days of Christ to our very day, to be faithful believers even at the cost of physical life itself. Untold numbers of martyrs of Jesus Christ have counted that cost as nothing in the face of eternal life to come.

When we just take a moment and reflect on all that… all that has been accomplished by those who have not just received the gift, but welcomed it, unpacked it, kept utilizing it, we know that the only reason we are here today as Catholic Christians ourselves—the reason these beautiful edifices that we walk into exist—is because those who went before us knew it was a life changing gift themselves and wouldn’t even consider not sharing it… and if they did ask themselves what the personal cost was—praise God—they still went ahead and did what the Lord was moving and directing them to do.   Think of the countless young men and women who heard God’s call to give up their lives and serve as a priest or religious sister or brother —and did so faithfully, sacrificially for decades. Think of that coupled with the collective efforts of selfless lay men and women who generously put the needs of others before their own has made the Catholic Church the single greatest charitable enterprise the world has ever seen. That’s a fact. The Holy Spirit has from the Church’s beginning prompted us to use the diverse gifts and talents of all of us to care for the sick, attend to the needs of the poor, feed the hungry, being often times the only voice of defense of compassion for those society has marginalized the unborn, the immigrant, the prisoner… We know all this, but it can get drowned out in the drumbeat of negativity we see and hear. The sadly accurate headlines that record horrific examples of utter selfishness or greed can depress and discourage us to forget those things. But the Holy Spirit has always been and remains working, transforming not only the Church but the world.

So what we celebrate tonight is that the Gift of the Holy Spirit isn’t a historical one-time gift.  This isn’t simply a remembrance and recollection.  We’re not just closing out the Easter Season and putting away the decorations in a box until next year.  This celebration of Pentecost is renewing—for us who have been baptized and confirmed, we have been gifted with that Holy Spirit.  That history of goodness He has inspired, guided and directed continues right here, right now – in this time and space – for you and for me… How is He stirring within us – within you?   What life-changing thing is He prompting us to do, to meet needs that He sees?  Can we move past the predictable human impulses and trust Him enough to recognize that whatever the cost, it’s too important for us not to share this gift?