Imagine the next time you are going to your local CVS, Rite Aid, or Pharmacy aisle at your local supermarket… and as you’re picking up Advil for headaches; Zantac for heart burn; Claratin for your allergies (perhaps I’m revealing too much here… anyway) you make your way down the aisle you are able to pick up a drug to cure fear.   That’s not a premise to some science fiction story – but something that appears to be a not so far off reality. The New York Times  not too long ago reported that scientists are working on a drug that will not simply numb you or sedate you when you are anxious about something to alleviate those symptoms – but promises to erase the fear that is tied to specific memories or things.

HAPPY EASTER!!! This is my homily for MAY 25, 2019 – SIXTH SUNDAY OF EASTER . The readings for today’s Mass can be found HERE Thanks as always for reading; sharing this blog on your social media sites; and your feedback and comments. I appreciate it. Have a good week – God Bless – Fr Jim. AUDIO. Also you can get the audios of the homilies from iTunes as a Podcast: https://itunes.apple.com/us/podcast/fr-jim-cherns-homilies/id1440618142?mt=2

So, for example, to illustrate how this works – they had three groups of people who were petrified of spiders. Group One was shown a tarantula and then given the drug; Group Two was shown the spider and given a sugar pill or a placebo; and Group Three was given the drug first and then shown the tranatula… They assessed each groups reactions that first day, three months later and a year later to see how they responded.   Amazingly, the one group that was shown the spider and then given the drug within days were able to touch the spider; three months later were able to take it out of the glass container and hold it… even a year later – their fear never returned. Theoretically, the drug is supposed to simply take the emotional response out by blocking some of the brain chemicals that rush in when someone is overwhelmed by their fears. It’s not like a Men in Black thing with a mind eraser that will alter or delete historical facts. So if you had a car accident that caused you fear of ever getting into a car, the scientists maintain, it’s not going to delete the memory of the accident – just the emotional response you are having that is preventing you from driving would be altered.

It’s an interesting experiment. And no doubt for some who are severely inhibited with deeply ingrained fears that greatly diminish their quality of life (like veterans suffering severe effects of PTSD) this could be a major game changer.

But – you knew there was a ‘but’ coming – some critics are concerned with any attempts to tamper with human memory. If we start altering our reactions, eliminating our fears – could that lead the way for us to be careless (or rather more careless), or reckless even? What about the darkest aspects of human history where horrific crimes against humanity and wide-spread trauma took place (like the evil of Nazi concentration camps during World War II) In the wrong hands, this medical discovery could be used to do some Orwellian things that we don’t even want to imagine.

Obviously there’s a lot that needs to be considered – the medical, the psychological (and hopefully) the moral consequences of this discovery. But the reason that this is even a thing, that this is even a road that scientists went down is that they are trying to address a human need, a human desire.

To be free of fear.

No doubt every one of us, to one extent or another, would sign up for that. Full disclosure, I’m including myself in this as well… Anytime I have to head to an airport for a flight, I am not exactly happy or calm about the prospect of entering that glorified soda can being thrust tens of thousands of feet into the sky at 500 mph. Not a fan.

And if we were to poll everyone in this Church, we would find, there are all kinds of fears:

Kids thinking about tests at school – where they are going to High School, College. Parents worried about their kids; families worried about loved ones who are ill… you’re trying to find a job – or afraid you might lose your job or just the day to day of work…There’s no shortage of fears.

Sadly the CVS doesn’t have those no-fear pills available.   Yet, we have an antidote that is far less risky, far less questionable, far more effective – right here. In today’s Gospel, we encounter Jesus at the Last Supper… the night before his brutal, torturous Passion, Crucifixion and death. Knowing what He is about to face… Knowing what these, his chosen ones whom he loves are about to face… He tells them Do not let your hearts be troubled or afraid.  It is said that of all the things that the Lord tells us throughout the Bible; of all the commands that are spoken; of all the directions that Jesus has given – that sentiment is the one said the most throughout all of scripture (and probably the one we disobey the most as well): To not be afraid. Pope Francis said one time that there’s 365 times in scripture that this sentiment is made – as if God were saying that to us every day – to not be afraid.

Amazingly, here Jesus is, facing the most horrific of events imaginable and that is what is on His heart and mind to those he Loves – this passionate command to not give into fear. 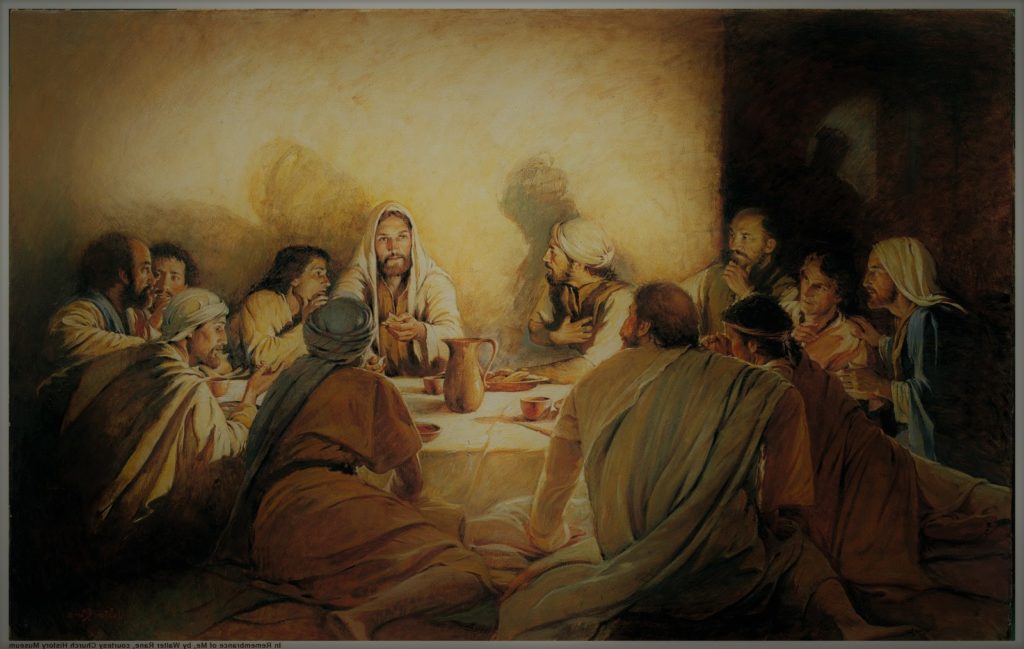 He says that not as a crazy man being ignorant of what’s about to happen to Him.

He says that not as some happy-go-lucky pollyannaish individual being insensitive to one’s legitimate fears.

He says that as one who knows us; as one who loves us; as one who is with us… He says that as one who promises us not a life free of any pain, or worry or yes even fear – like if we just sign onboard with Jesus He’s an insurance policy against ANY negative things from happening to us. But rather He speaks heart to heart… He says to us – no matter what it is we face; no matter what the odds; no matter what the fear that is troubling our hearts – He loves us unconditionally. We are wonderfully, beautifully made in His image for a reason, for a purpose… and we find that purpose, we find that meaning, we find that love – and even more – the peace we so desire – when we love selflessly, when we remain connected with Him by keeping His commands, when we allow Him in, when we yield to the Holy Spirit to guide, direct and dwell within us.

But that is a daily choice we face: To choose not to yield to fear. To choose, instead, to open the doors of our hearts to Christ. It’s something that we constantly have to recommit ourselves to doing. Because the sad reality is that the world around us – whether on a global level from the things that leaders, politicians say and do; different threats advancing or from a place closer to home, more locally: family struggles, illnesses, doubts, difficulties and setbacks all of these things are sowing seeds of fear. At the same time – secular forces to down right evil forces seem to be promising fulfillment, promising short-cuts, or even promising just the absence of fear in easier, quicker ways that never seem to work.

When we say Jesus understands what we’re going through – that’s not in some condescending, patting on the head like “there there – it will be alright – I understand.” That upper room where this Gospel bring us to – those events that Jesus and his closest friends were anticipating – was a place of confusion that would turn very quickly into some of the greatest fears imaginable. Jesus promises extend past the events of Good Friday; and outside that intimate circle of friends. In this proclamation, He says to us that When we turn to Him – the Father, Son and Holy Spirit ; -When we speak of our pains, our worries our fears; When we remember His history of goodness and know that His promises are trustworthy; When we let our faith enter into whatever it is that is causing us such distress – then the great words of St Teresa of Avila start to be realized who once said: “May today there be peace within. May you trust God that you are exactly where you are meant to be. May you not forget the infinite possibilities that are born of faith. May you use those gifts that you have received, and pass on the love that has been given to you. May you be content knowing you are a child of God. Let this presence settle into your bones, and allow your soul the freedom to sing, dance, praise and love. It is there for each and every one of us.”