“What happens after we die?” This was the headline that was “trending” Monday afternoon alongside pictures of none other than actor Keanu Reeves, a film star whose latest movie, John Wick: Chapter 3, opened this weekend. I’ll be honest, I initially rolled my eyes and dismissed it thinking that this was going to go down some New-Agey, secular rabbit hole that I didn’t even want to look into, let alone start debating, discussing, or fighting about with people online.  Nevertheless, my damn ADD got the better of me, and I hit the back arrow on the web browser to check out the story: Keanu Reeves was on The Late Show on CBS last week promoting his film, and as the host Steven Colbert often likes to do in these types of interviews, he’ll throw out a question that seems random and somewhat flippant as to elicit a dramatic reaction from his guest. Accordingly, Colbert asked Reeves, “What happens after we die?”, which was initially met with scattered laughter and amusement. Reeves then took a moment’s pause and simply said, “I know the ones who love us will miss us.” The audience awwed and Colbert gently reached out to shake Reeves’ hand, and you could tell that although the question was intended to be humorous, it very quickly turned into a deeply personal and intimate moment in what was an otherwise typical late-night TV interview.

HAPPY EASTER!!! This is my homily for MAY 19, 2019 – FIFTH SUNDAY OF EASTER . The readings for today’s Mass can be found HERE Thanks as always for reading; sharing this blog on your social media sites; and your feedback and comments. I appreciate it. Have a good week – God Bless – Fr Jim. AUDIO. Also you can get the audios of the homilies from iTunes as a Podcast: https://itunes.apple.com/us/podcast/fr-jim-cherns-homilies/id1440618142?mt=2

What many probably don’t know was that Reeves has faced tragedy throughout his career. The year that he became a global acting superstar was sadly right around the time when the actor and his girlfriend, Jennifer Syme, lost their baby girl in a stillborn birth. What’s more, two years later, Syme died in a tragic car accident just as Reeves was gearing up to promote his role in the sequel to “The Matrix”. This tragedy hit him so hard that he retreated from the public spotlight in order to grieve privately. In light of all this, his answer and the way in which he shared it makes it all the more heart-wrenching, personal, and real —“I know the ones who love us will miss us.”

Talking about death makes us uneasy and anxious. It brings up thoughts of loved ones we’ve lost, and this is a feeling that we can completely relate with Reeves about: That we do indeed miss them. Death also calls to mind the people who we’re worried about and perhaps are currently praying for; those who are facing illnesses and who we’re afraid of losing.

Even as Christians, whose faith centers around Jesus Christ being crucified, dying, and rising from the dead, and who offers eternal life to those who believe in Him and follow Him; that central truth as to who we are, what we believe, and why we’re here every Sunday is something that we have effectively pushed to the side. We limit these thoughts and feelings to funerals where we try to console ourselves temporarily with that belief. We might even share these sentiments with others in moments where they’ve lost someone they’ve loved; as a way of coming up with something to say in an incredibly difficult moment in which we don’t really know what else to say.

But do we truly believe that this is good news? Does it shape how we live our lives and our world-view?
That Jesus Christ has risen from the dead.
That eternal life, because of our belief in Him, is possible for each and every one of us.
That this is our destiny. 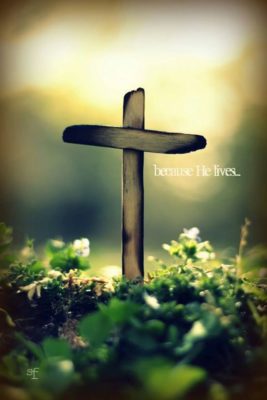 In the second reading, we heard from the Book of Revelation, which is one book of the Bible that Catholics probably avoid the most as its language and tone are difficult to understand. This book contains visions that St. John had several decades after the death, resurrection, and ascension of Jesus. At this point in time, the Church had been suffering intense persecution (by then all of the apostles had been martyred except John who had been exiled), and some Christians were confused —shouldn’t Jesus have returned and shouldn’t the “end-time” have happened already? These kinds of fears and doubts were surfacing more and more: Where was their victory over death and the grave? How could they gain assurance of eternal life?

Sadly, there have been (and there still are) preachers who try to manipulate the Book of Revelation to cause fear in people by spreading doomsday predictions that use verses from this scripture, such as “this is the end of the world” and “these are the end times”. However, John’s vision was never intended to be seen as some type of dire warning; on the contrary, he was pointing out that the battle against evil is ongoing, that God will prove victorious, and that his victorious power continues to be at work right here, right now, which we heard so beautifully described in:

Behold, God’s dwelling is with the human race. He will dwell with them and they will be his people and God himself will always be with them as their God. He will wipe every tear from their eyes, and there shall be no more death or mourning, wailing or pain, for the old order has passed away.
What this vision is saying is that the victory over death has already happened. Although the outcomes of this victory have not yet fully been experienced on earth, it has indeed happened here, and it is evolving… God is with us just as He promises in one of the most hopeful verses of scripture: “Behold, I make all things new.”

This is a beautiful vision, and the words and sentiments provide us with comfort. But in the day-to-day struggles that we face we want more than just words, and we need more than mere sentiments. We look for signs to back up these promises, don’t we? Where do we find this “newness”? And how do we find God among us? Jesus answers these questions in the Gospel: Love, that one short, simple, yet complex word. Jesus is telling us that what lies at the core, the heart, of following Him, what is essential in knowing God and having a relationship with God, is love.

This gospel passage comes from the Last Supper. Jesus knows what’s about to happen to Him: Judas has already left and is off to arrange his betrayal, which will set into motion the Passion and Death of Christ. However, in spite of this knowledge, Jesus’ thoughts are far from His own wellbeing and what He’s about to suffer; and despite the evil that is about to be unleashed, Jesus knows that this will be the battle in which the epic, eternal fight between good and evil and between life and death is going to take place. He is to be glorified. He will allow this evil to take place out of His love for you, me, and all of humanity. He allows this ultimate of injustices to occur because God sees and knows the brokenness of our sinful world and nature, and He knows that the only way to ultimately conquer this is through love. He lovingly allows this to unfold so that when Jesus is risen from the dead, it will be the ultimate affirmation that love is stronger than death.

That’s why Keanu Reeves, and any one of us who grieves, mourns, and experiences the deep pain that arises when dealing with death, shouldn’t see this as a sign of defeat or weakness. The tears, the sadness point to the power of love that we experience in missing someone who was close to us. And as final as death seems and although the loss and absence of someone can cause such an ache in our hearts, it demonstrates that love is stronger and more powerful than death. And beyond these painful experiences, we see the creative, active power of love in the countless ways that it transforms our lives and our world. There’s a married couple that I know, and the wife was dying from cancer, but when you spoke to them separately, both were completely worried about their partner, not themselves. That’s love. When a parent finds the energy they didn’t know they had to stay up with their sick toddler after racing to pick the other kids up from school and drop them off at practice, after preparing dinner and helping them with their homework…that’s love. When a teacher comes to school early or stays late to help a student who needs extra help… When cops encounter a homeless man on the streets in the middle of winter without any shoes on and go and buy him a pair of boots… When a little kid insists on walking grandma to her car with her toy umbrella in the midst of a torrential downpour like we experienced last week, even when grandma told her not to worry about it because she was going to get soaked anyway — that’s love.

In all of these ways, the selfless love that the Risen Christ commands us to embrace for one another is made real. In all of these and countless other ways, we are reminded and experience glimpses of how Jesus put aside his divinity and humbled himself by taking up His cross out of the love that He has for us all. In all of these ways, we see how love conquers death; thus, we begin to come to the realization that the answer to “What happens after we die?” is that we meet God, who is the perfection and completion of love. May the truth that He “make all things new” for us be seen in our renewing of His vision and in the mission the Risen Christ has entrusted us, His followers, with.