Not too long ago, someone that I went to school with posted “I think I’m ready to jump” on his social media sites.   Accompanying those words was a link to a video titled Jump club. Even though I haven’t talked to this person in years, my ADD mind couldn’t quite resist, checking out what was it they were getting into. Was he buying a trampoline or joining a sky-diving club? As it turned out, it was neither of those things.

HAPPY EASTER!!! This is my homily for MAY 5, 2019 – THIRD SUNDAY OF EASTER . The readings for today’s Mass can be found HERE Thanks as always for reading; sharing this blog on your social media sites; and your feedback and comments. I appreciate it. Have a good week – God Bless – Fr Jim. AUDIOAlso you can get the audios of the homilies from iTunes as a Podcast: https://itunes.apple.com/us/podcast/fr-jim-cherns-homilies/id1440618142?mt=2

It was an outgrowth of an inspirational book titled “When to Jump”, written by a guy named Mike Lewis.   At the age of twenty-four, Lewis explained while working at a prestigious corporation he eagerly wanted to leave the job and pursue his dream of becoming a professional squash player.   (NOOO Judgment… One person’s dreams….) Recognizing this was quite a major shift, which might be difficult to explain on a resume moving forward, he was a bit hesitant. So he went about seeking other people’s experiences of determining the exact time of moving on from something that was comfortable and known to something they had only dreamed of doing.   He interviewed others who had, as he put it, “jumped,” and the responses he got—from a banker who started a brewery, a publicist who ended up becoming a Bishop, a garbage collector who became a furniture designer, and so on—all culminated in his book (after he started playing Squash professionally)

It was motivational to see people being reflective about where they were at – bravely confronting their unhappiness – taking that all important risk to move from doing something that was safe and that they knew to jumping into something radically different. And the authors and participants were sincerely honest. Some talked about hopping on from one thing to another and that next thing that they thought was “the thing” did not turn out the way they expected it to. Instead of viewing that as a failure though, they saw it as a step in a series of steps (or jumps) they needed to make to get to that one thing – whatever it was – that would really tap into their passions and lead them into a life of contentment.

One specific interview really stood out was this young guy who said that for him, “The hardest part was accepting I had to start over. ”   I couldn’t help but agree… In my own life, whatever it was- graduating from school, going to another school or entering seminary, getting ordained, being sent to a new parish – all of those transitions which I knew were imminent and had planned for with eagerness and excitement… the thing that was so hard was starting over. All of those relationships that I had made were going to change – which meant that I would have to start afresh and make new ones. All of the things I knew and were just another part of my daily routine would now be gone. How often do we get stuck or trapped because we’d rather stick with what is known than take that risk, take that coveted leap of faith?

Yet, the more I reflected on it, the more I got convinced that the life of the Christian is really all about learning to jump. And the hardest part is accepting we have to start over to keep taking forward-looking steps – moving beyond what is seemingly comfortable and familiar. 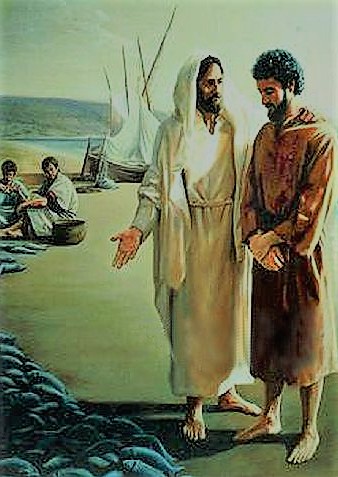 Just thinking about St. Peter, the first Pope who we heard about in this passage we just proclaimed. Throughout the gospels, we see Peter jumping every now and then. When Jesus calls Him to follow Him, there’s immediacy; there’s a complete abandonment, as the Gospels tells us he drops his net “at once” and follows. Other times, his jumps aren’t necessarily the best – like when He talks without thinking (on one occasion, Peter misunderstands what Christ is saying to him to such a grave extent that Jesus is compelled to rebuke him, “Get behind me Satan”). Or at other times when Peter is a bit impulsive, which earns him further admonishment. Or worst of all – during the Passion of Jesus Christ – Peter, who is supposed to be the “rock” upon which Jesus was hoping to build his Church, denies even knowing Christ.

It’s hard to imagine ever recovering from something as brutally intense as that -which is why today’s Gospel has always been such a moving and hopeful one for me.   Because we see, we hear once again how God doesn’t treat us like we sometimes treat one another. God doesn’t dwell on our failures or our mistakes. Sure, he knows about them; but the Lord doesn’t look for reasons to disqualify us. Instead, he’s constantly looking at our potential. He’s constantly looking at us as the beloved sons and daughters that he created us to be. He knows that when the reality of our bad choices, our mistakes, and our missteps finally occur to us; when the shame, the embarrassment, the pain comes rushing in from all directions at once, we can become isolated and alone – believing the devious lies of that master liar, the devil (who instigated us to make those bad choices in the first place) to now believe there’s no hope and chance…we’ve made our bed, we have to lay in it, and just deal with it.

Which is what is happening to St. Peter. The apostles had already received and experienced the amazingly glorious news about Jesus’s resurrection from the dead. The man they witnessed being brutally tortured, crucified and killed on the cross was alive again.   You would think that such an experience would be welcomed, exhilarating, and life changing. What’s Peter’s response at the beginning of today’s Gospel. I’m going fishing. Huh?

He’s feeling guilty … He’s ashamed. He was probably thinking, Jesus must realize by now what a failure I am.   In the Passion narrative, one of the most brutal lines, to me, is when Peter denounces Christ for the third time saying, after being asked “You know this guy Jesus, don’t you– you were with him.” Peter responds “My friend, I do not know what you are talking about.” Just as he says this, the cock crows, and the Gospel says Jesus turns and looks at Peter. Right then (a second too late) Peter knows he’s let Jesus down…yet again – and now on a catastrophic level. How does he recover from that? Is recovery even possible? He probably feels his opportunity to be the leader Jesus had imagined ended as soon as the cock crowed. And no wonder, really. So he returns to what he knew before his encounter with Jesus. To the life he had before he found his life with Christ. He returns to the life of a fisherman.

“The hardest part is accepting you have to start over.”   Amazingly, but not surprisingly, Jesus is not stuck in the past, or deterred by Peter’s past failures; he won’t let Him stay there either… He meets Peter right where he is feeling miserable and vulnerable, in his darkest chamber of isolation. And, beautifully, Christ first reminds Peter – that he will accomplish great things when he listens to Jesus and does what he has been asked to do – Jesus demonstrates this by repeating the same miracle that got Peter’s attention 3 years back, with that huge catch of fish. Then in that emotional repeating His question to Peter, “Peter do you love me?” – He gives Peter the chance to acknowledge him three times – as though He were lovingly obliterating the three times Peter had denied him … Peter professes “Yes Lord, you know I love you” three times – not to convince Jesus of anything. Jesus already knows Peter’s heart inside out … but so that Peter himself can truly accept that he has to start over… He has to let go of this… let go of his past… of his failure… and move forward to the profound awareness that Jesus’ Love is greater than his past or his failures. Peter is reawakened to that thing that made him follow Jesus to begin with… the bright spark that the Lord once saw in him. He realizes that yes it is time to Jump, to start over… remembering the enormity of what Jesus desired for him – to be that rock, to be the very first Pope of the Church. And he can then attempt to fulfill that call (albeit feeling a bit more humbled than he was before).

What about us? Rather than reflecting on whether you should go for a new job; look to move to a new house or pursue a different degree – how are we progressing spiritually? Where are we in our relationship with God?   How is Jesus asking me – how is Jesus asking you to go deeper relationship with Him… What is Jesus putting on our heart that is specifically meant for you for me to become holier… to answer His call to do something for Him. Maybe it’s some nudge to volunteer for something, or following up on something we started in Lent (like I started going to daily Mass, so why should I stop it just because it’s Easter). Maybe it’s something that’s a bit more challenging – not making excuses or waiting any longer and humbling myself and apologizing to someone that I know I need to – or forgiving someone who has hurt me in the past and letting go of the hurt that I’ve been nursing. Maybe it’s something more life-altering – I really need to pray and talk to someone about discerning that vocation…

What St. Peter reminds us is that God doesn’t dwell on our failures and mistakes. The Lord isn’t looking for reasons to fail us, exclude us, or cast us aside as unworthy. Instead, He’s constantly looking at our innate goodness, at our best tries, our near misses, as well as our clumsy attempts at doing His will. He’s constantly looking at us as the beloved sons and daughters we are to Him. Unlike Judas – who believed the final lie that for him, there could be no hope, no second chances, no forgiveness – through God’s unending grace and mercy, Peter was able to have a second (third, or fourth — who’s counting already???) Another chance to start over.

Where do you find yourself today? Is it a place where you need to start anew – like moving away from sinful, destructive things? Is it starting anew in that it’s a moment to encounter Jesus Christ in a new way that can be equally as transformative? Whatever it may be, life with Jesus is going to be about jumping into new things over and over again.   May you and I have the faith and trust to make whatever leap it is that He’s calling us to.