If you had asked me three months ago who Lori Loughlin or Jussie Smollett were, I wouldn’t have had a clue. Even if you had showed me their pictures, I wouldn’t have been able to tell you if they were athletes, politicians or musicians. In the last few weeks, I’ve learned they were both television stars from two popular shows – Full House (and the Netflix revivial Fuller House) and FOX TV’s Empire. I know this, not because I binge watched either of those shows – but rather because of criminal activity that the two actors have been accused of, and the non-stop feeding frenzy of news and fallout from both stories. Loughlin was charged as part of this nation-wide investigation into the  scandal of people cheating or bribing elite colleges and universities to get their children admitted. Smollett back in January made a report that he had a hate crime perpetrated against him – and then a few months later the police claimed that was a hoax and charged him with filing a false police report among other charges.

This is my homily for APRIL 7, 2019 – the 5th SUNDAY OF LENT. The readings for today’s Mass can be found HERE Thanks as always for reading; sharing this blog on your social media sites; and your feedback and comments. I appreciate it. Have a good week – God Bless – Fr Jim. AUDIOAlso you can get the audios of the homilies from iTunes as a Podcast: https://itunes.apple.com/us/podcast/fr-jim-cherns-homilies/id1440618142?mt=2

It’s sad or frustrating to me – Two people who I don’t know and really had no interest in their works (no offense, I hated Full House the first go round and never have seen an episode of Empire) are now names that I know simply because I pay attention to the news.   If we want to even call it news. More often than not journalists have become commentators are offering their opinions and editorials sandwiched in between different facts and aspects of these cases which may or may not be fully accurate.   But I digress. The reality is that despite all kinds of things that we should be focusing on – pressing issues, urgent concerns, humanitarian crises around the world – instead, the latest fall from grace, the next scandal or whenever there’s an arrest surrounding someone who’s in the public spotlight — those things seems to garner the most interest. Various news agencies will argue that ratings for their shows or traffic to their websites is sky high when you splash these types of stories about the latest public figures major failure . People are more interested in hearing about those things rather than something as horrific, revolting and evil as when infanticide was legalized in New York State a few weeks ago.

This isn’t a new phenomenon. Despite how“technologically advanced” we’ve become – with countless forms of media and entertainment that are at our finger tips, Stone Throwing would still be as popular as it was in Jesus’ day.

Think about what we just heard with this vivid gospel scene: Crowds are all coming to hear Jesus teaching and breaking open the scriptures they had treasured for centuries in a dynamically radical new way. Jesus is proclaiming to them God’s immense and infinite love and mercy for His people. He’s telling them everyone has the opportunity to experience that precious gift which can be life changing if it’s truly accepted and lived. That’s when the religious authorities of the day enter the scene, looking to put to death a woman who had been caught in adultery. Moses, they point out, an incredibly important figure in those beloved scriptures had told them to do so, so they put Jesus on the spot. Jesus – All your talk about a merciful, loving God: deal with this. Is Jesus going to simply forgive the woman of this horrible sin? (Which people would have seen as a contradiction to scripture which would have been a blasphemy – also subject to death) or would he go along with her punishment contradicting all that he had just taught his followers about this loving and merciful God.

Jesus sees and hears the cold and closed hearts as they put forward these 2 stark and sad choices before Him . In a brilliant move that left the self-righteous crowd hungry to embarrass this woman even further and then kill her – completely speechless, while being faithful and true to what he has taught he simply says “let the one without sin cast the first stone.” We rightly admire the twist that Jesus offers that confounded and stunned the crowds. 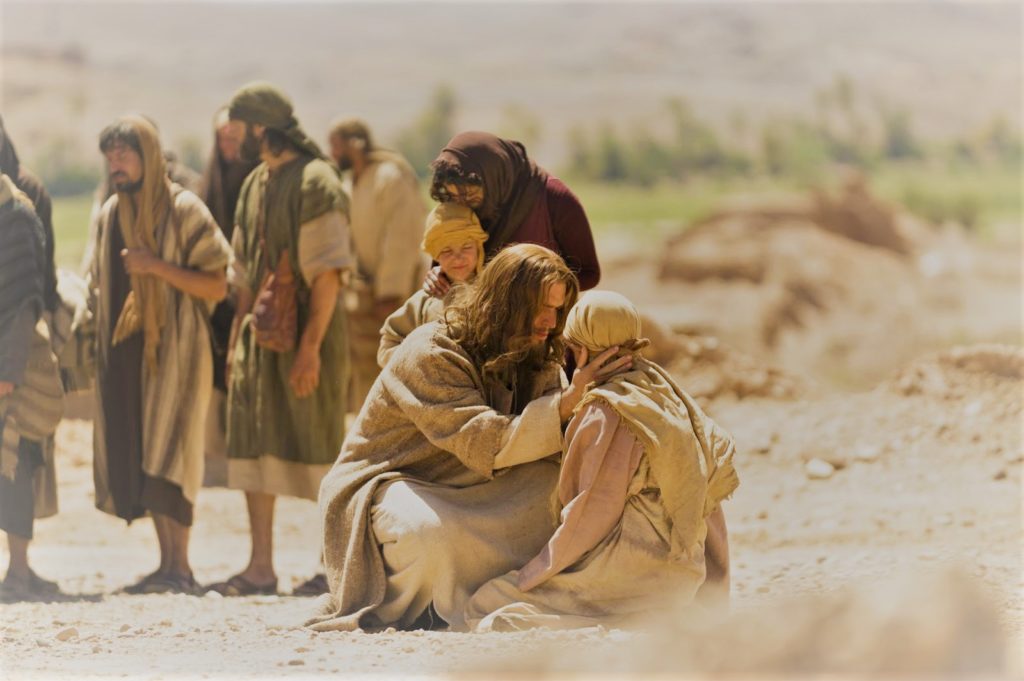 But too often people learn the wrong lesson from this. That’s not the end of this passage or the end of the lesson Jesus is teaching. Jesus is teaching us that all sin is evil, all sin is destructive, all sin to one degree or another separates us from the love of God, all sin diminishes who we are, who God creates us to be…. all sin must be confronted. But, even more important, Jesus teaches us an essential point: Truth without Love is cruel and Love without Truth is misguided.

So yes, Jesus does say “Let the one who is without sin cast the first stone” and “Neither do I condemn you” to the woman caught in adultery.   It’s obvious that He loves this woman and that Love is essential in his interaction with her and everyone of us… Love of God, Love of Christ is the foundation, the bedrock to all of the commandments. But and this is an important but – we can’t omit Jesus telling the woman to “Go and from now on sin no more.” Jesus is speaking Truth with Love. And what He tells her is This adultery has to stop… because it’s hurting her, it’s hurting the man, it’s hurting their families. It’s diminishing them. This sin has to stop. Not because if it doesn’t “ANGRY GOD” is going to punish her and get even with her. But because the truth is, she’s already living and experiencing hell. She’s living a less full life than God ever imagined for her and for the unknown man… That sin has to stop – not because of the angry crowd – but so that her own fullness of life will be possible.

The same is true for the motley crew who are standing with stones in their hands. They seem almost excited to find someone with fault, with sin, that their vengeance, their murderous rage is just desperate for the slightest approval from Jesus so that it can be unleashed on this poor woman caught in adultery (notice they forgot to bring the guy she got caught along with… a whole lot of questions on that… perhaps it was one of their friends?). When Jesus doesn’t feed into that blood thirst – when He tries to get them to expand their hearts and minds to hear and consider what He’s trying to teach about who God is – rather than re-evaluate, reflect, examine and change their hearts… rather than trying to imagine themselves being in that same spot, caught and known to be guilty and deserving of punishment (which everyone of us, if we’re honest, can imagine for one thing or another), they ignore God’s gift of love and mercy… – they will stew, and grow angrier and turn that rage onto Jesus himself – which we will recall next week on Palm Sunday as we recall Jesus’ passion and death. Jesus Himself will be the victim to people who forget or ignore His teaching that : Truth without love is cruel – and love without truth is misguided.

That is our challenge as we enter these last days of Lent. When we decide to obsess about the latest celebrity or politician’s faults rather than spending even a percentage of that time on our own sins we do the same thing. And the result will leave us with two options either attack one another or even God himself.   Scriptures shows us what happened with this group becoming a murderous mob demanding Jesus’ death.

We don’t have to join that mob. We still have time this Lent to turn off cable news or our laptops giving us the latest Lori Loughlin or Jussie Smollett case update and instead reflect on how short each and everyone falls in responding to God’s grace, His invitations, His expectations and commands.   To take the opportunity to go to confession and repent of those things and be reconciled with God.   Will we drop our own stones, and drop to our knees and turn to the one who can save us?