Hi everyone, this is my homily for MARCH 31, 2019 – the 4th SUNDAY OF LENT. The readings for today’s Mass can be found HERE Thanks as always for reading; sharing this blog on your social media sites; and your feedback and comments. I appreciate it. Have a good week – God Bless – Fr Jim. Also you can get the audios of the homilies from iTunes as a Podcast: https://itunes.apple.com/us/podcast/fr-jim-cherns-homilies/id1440618142?mt=2

Of all the new trends that have evolved in recent years, the whole phenomenon of taking “selfies” is really something that — I don’t know it’s hard to figure out. The act of taking a picture of yourself with a smart phone wherever you find yourself and sharing it with the world, primarily on social media is relatively something new…   It seems so bizarre and weird – even more so when I found myself doing it.   But did you know that it can be dangerous?

On Friday, there was this article online saying “Dumb tourists risk their lives for selfie with hippo.” Couple of things: First I love that headline. They don’t even try to be sober, neutral, or professional about it anymore. They’re going full throttle with an opinion, attention grabbing, judgmental headline with the lead word being DUMB. Secondly, the headline works because, of course, I had to click the headline to see it for myself. Even better, it wasn’t a written story, but a video of exactly what the headline said – Dumb toursists getting closer and closer taking pictures of this enormous creature who looks pretty docile (but the captions keep warning are not, as the tour guides are yelling at the people to get away). I will be honest… nothing happened. The hippo looked up, looked perturbed, people were shouting to get away and the video ended. Very, very anticlimactic.

So of course, you know what happened next. The internet is scary trying to find similar stories that the internet thinks interests me. So now these suggestions pop up –

“WOMAN MAULED BY JAGUAR WHILE TAKING A SELFIE…” Ok, back on track – now you got me curious again… Here was a story about a woman who had jumped a barrier at a zoo to get close to take a selfie with a jaguar and the jaguar clawed off the woman’s arm. She lived to tell about it, and apologized to the zoo (while saying they really should make the barriers bigger to prevent future incidents. Uh – no why don’t you read the signs and not climb over them in the first place)

But that article led to another one that started with him asking “How prevalent has the “death or injury by selfie” phenomenon become? Prevalent, enough, that Wikipedia now maintains a page titled “List of selfie-related injuries and deaths.” It’s a frighteningly long list.” Which of course I needed to see for myself. The author wasn’t lying. They have a running list from 2011 and have sourced over 200 examples so far.

Reading stories where people fell over cliffs, crashed airplanes, burned to death because they got too close to an oven – all while these people were taking these stupid pictures of themselves – you can see there’s a bit of a problem. Some people are so obsessed with themselves and what they want, they will do whatever they want, ignore warnings, put themselves in harms way, put others at risk all for their own all important selfie.

Taking selfies might be new…   but the mentality, thought processes… the obsessions and extremes people make in pursuit of attaining these self-focused desires; their disregard for anything or anyone around them in that pursuit isn’t and they are very dangerous as well. 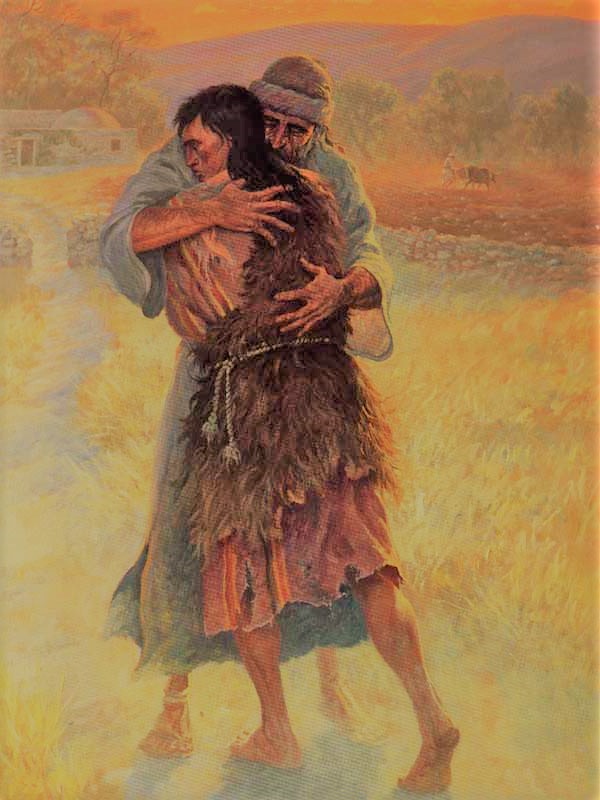 That’s something that comes to mind with tonight’s Gospel. Even though it’s called “The Prodigal Son”- when you think about it, that’s really only one part/one character of the story. The other elements and the characters all really could easily be the focus of the story that we could get lost in thought and meditation on. For example, for me, there’s never a time that I’m not moved when I think about the part of the story when the prodigal son finally wakes up and makes his return home and we hear “While he was still a long way off, his father caught sight of him, and was filled with compassion. He ran to his son…” The realization that’s how God the Father is – that, no, he is not inside the house stewing, angry… just waiting for us to come begging on our hands and knees desperate for a second, or third, or thirtieth chance… No – God is actively waiting and looking and will run to meet us whenever we start to turn back to Him – that can get me choked up.   Honestly, that should be the sole focus that each and everyone of us has when we’re preparing to go to confession – that when we go to Confession and are reflecting on all the crappy things that we’re filled with shame and sadness over, God the Father is looking and waiting for us and is overjoyed to run out to meet us.

As much as I love that scene and part of the story, what really hit me re-reading this passage this time though is how awful both of the brothers are in this story. That both of them are basically suffering from selfie-related injuries… Where they are solely focused on themselves, their wants, their desires at the expense of any and everyone.

Brother # 1 wants to be where the action is at, giving into all the temptations, the obsessions of the world… He’s willing to trade in all that he has – life with a loving family, a loving home, a Father who has given him everything and still loves him enough to freely let him go to pursue all those empty hopes and promises. In fact, what the ingrate is saying in asking for his inheritance is that he can’t wait for his father to be dead so he can get his money and go off on his own and do his own thing, so he asks the old man can he “cash out” now. Selfie-derangement syndrome indeed.

When we hear the lavish reconciliation and restoration he receives, Brother #2 often is an after-thought. We hear he’s miffed (he doesn’t even call the guy his brother anymore, look at what he says to his Dad – it’s “your son”) But in all of that, we get a bigger glimpse of what is in his heart. He’s obviously been thinking that with Brother 1 out of the way, now he’s for sure the favored son. He should be treated better, get the bigger party and bigger recognition. But think about it, brother #2 – the one who remained with his father… who as he said served and never disobeyed his father – you know what he missed as he was focusing on what he was doing and what he was getting (or as it turns out, not getting)- He never recognized, didn’t care, didn’t notice that his father was heartbroken that his other son had left. Selfie-derangement syndrome once again.

The beautiful thing about this Gospel that Jesus offers, [which we reflect on at this just past the mid-point of Lent] is that the parable invites us to dig in and reflect on where we see ourselves in the story. Whether we’re someone who feels a bit distant – that maybe we’ve made choices, maybe we’ve made decisions, maybe we’ve felt far away and are just slowly making our way in the door here and can relate to the younger son –

– or if we’ve been here each and every Sunday and maybe a few times during the week, are involved and engaged – maybe even on leadership or in a bible study or connected to different parts of Newman Catholic – maybe even a priest – what this Gospel tells us is that we are all in constant need of conversion… our hearts are in constant need of change. There’s no one of us that “gets it” perfectly.

That’s why someone like St Francis of Assisi – a Saint who countless millions are inspired by could say something like “We may know with certainty that nothing belongs to us except our vices and sins.” He wasn’t being self-deprecating. He was being sincere and self-aware.   Because Francis knew he needed that constant conversion, that constant change. He knew that Jesus would bring that about within his heart the more honest he was with himself.

And the same is true for all of us. In our day and age the number of selfie-related injuries and deaths on a spiritual level is at crisis levels. We can easily succumb to temptations that appeal to our self centered, selfish impulses and lures us away from the Father’s house. We can just as easily notice others who’ve done such and become oblivious of the sadness in the Father’s house for those who are lost — as we become lost ourselves in being judgmental and condemning of others.

Jesus reveals the Father’s greatest hope and wish. That He wants all of us… each and everyone of us. Jesus shows us the face of the Father who looks and waits for the younger son to come back… the Father who begs with the hardened, cold-hearted brother to rejoice with Him.   May we bring joy to Him simply by recognizing that He waits for us. He longs for us to Come Home, to be with him always, to enjoy all that the Father has given us – and come to the fullness of life He offers.