Hi everyone, this is my homily for MARCH 3, 2019 – the 8th SUNDAY OF ORDINARY TIME. The readings for today’s Mass can be found HERE Thanks as always for reading; sharing this blog on your social media sites; and your feedback and comments. I appreciate it. Have a good week – God Bless – Fr Jim. Audio: Audio: : Audio: Also you can get the audios of the homilies from iTunes as a Podcast: https://itunes.apple.com/us/podcast/fr-jim-cherns-homilies/id1440618142?mt=2

People today are more divided than ever… We’re told and reminded of that reality on a regular basis and in countless ways. So it’s interesting when you stumble upon things that actually unite people.   And one thing that really unites people is something that ticks them off: when they see hypocrisy.   And the more blatant it is, the more universal wrath it inspires. A website compiled a list of some of the worst examples they were able to find: There was the motivational Anti-Drug speaker who had been going around holding assemblies at schools, speaking to kids throughout the state of Kansas for some time who was charged with dealing drugs and kidnaping. Or – there was the story of two different principals offering heart-felt messages that they plagiarized. The first principal was uncovered by a faculty member who thought the memo sounded out of character for her and was correct, it was actually a column from Forbes. The other principal’s words to his graduating seniors in their yearbook was caught by students who actually read the entire message to the end and noted that the closing words were addressed to students from a different school from a previous year. One of the worst incidents on the hypocrisy list came out of Ohio involving one of their judges. The man had been an outspoken activist against drinking and driving.   So much so that when he was elected as a judge, he decided to bring cases for drunk drivers out of the courtroom and have the trials in schools in front of students so they could see and hear what could happen to them if they were foolish enough to drink and drive. In 2014 he ruined his reputation when he got plastered, drove his Mercedes into a city bus (the article reporting the story couldn’t resist pointing out, is “literally the easiest obstacle to avoid on the road”) then the judge fled the scene for another 12 miles, at which time he refused to take a brethalyzer test or a field sobriety test.

We see, hear, know countless examples of these things – whether they are simple and stupid or gross and outrageous – and they rightly infuriate us. So Jesus’ teaching in tonight’s Gospel doesn’t seem incredibly groundbreaking… nor is it something that is specifically a Christian understanding. “How can you say… ‘let me remove that splinter in your eye’ when you do not even notice the wooden beam in your own?” Jesus is pointing out – you have no moral authority to do that… Pretty logical thinking and teaching here.

But there is an important distinction that does seem to get lost. Often times, these quotes of Jesus have been utilized in a way to shut down any discussion of morality. Because hypocrisy is so wide-spread, better not say anything about anyone. “Judge not lest ye be judged!” That’s not Jesus’ goal here. 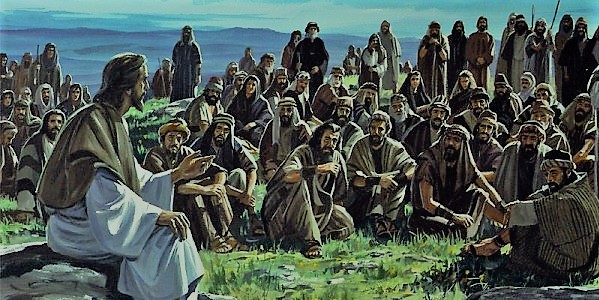 This passage we just heard is the end of a long sermon in the Gospel of Luke from Jesus that we started hearing three weeks ago. It started with the Beatitudes where those who were struggling, poor, hated on account of Jesus were said to be Blessed when they recognize that God wasn’t punishing them or abandoning them.   Those things that were happening were unjust, evil situations and Jesus made it clear that God the Father sees and cares for those suffering – as well as those who are causing the suffering (which is why Jesus also warned those who are in positions to do something to alleviate those burdens and do nothing about them they had better start reconsidering that). That was followed up by last week’s radical call of loving our enemies… doing good to those who hate us… blessing those who curse us… praying for those who mistreat us.   An incredibly challenging, difficult list that for most of us, just praying for the desire to do those things is going to take some time.

But the point is, Jesus is not unaware of evil things that are being done. And He’s not telling us to simply be blind, deaf, mute in the face of them. Particularly when we’re in positions to do something about them.   It would be foolish for us to say well if a judge who has been outspoken on drunk driving falls into doing that same stupid and foolish thing well – oh well – I guess that we can’t expect anyone to avoid that…

But at the heart of all this Jesus is calling us to be aware, to own our sinfulness… We have to confront our own beams in our eyes. We have to acknowledge our own hypocrisy.

This Gospel was timely for me. A friend of mine caught me by surprise when they kind of aggressively asked how I could stay a priest, could remain Catholic with all of the recent news, headlines, stories about the scandals, the failures, the hypocrisy of so many in leadership. The messages back and forth included lines to me saying “I know you… I know you’re a good guy, you’re better than this… you’re better than them… you shouldn’t have to be around them.” I’m sure I’m not the only one who were confronted by similar sentiments.   I kind of was taken aback by it at first. Because I wanted to agree with them and say “you’re right” – because the stories are so sickening, depraved, infuriating – and like I shared a few weeks ago, there’s that very human reaction that wants to disassociate with all of this stuff.   But I couldn’t hit enter on the send button saying any of that.   Instead I had to and have to admit – I’m a hypocrite too. I’m a sinner. I foolishly fall into temptations. I fall short of what Jesus calls me to do. I need (and go to confession). Those aren’t things I’m proud of. I’m not sharing any of that as a boast – at all.   And I doubt anyone is scandalized in my sharing that.

This week, this Wednesday is Ash Wednesday. And again, as divided as a people, even more sadly, as a Church we can be, we will find ourselves united together in a simple, yet profound reality. We as a Church unite together to say that we are sinners; we need God’s mercy. The ashes are a reminder that without God’s breath of life that he generously has poured out on us, that is all we would be, a pile of ashes. We are told on that day as we receive them to “turn away from sin, and be faithful to the Gospel.”   The only way forward for the Church, and the only way for us to confront the evil that we see in the world around us begins when each of us heed those words personally, and help one another collectively to do so.