Hi everyone, this is my homily for FEBRUARY 24, 2019 – the 7th SUNDAY OF ORDINARY TIME. The readings for today’s Mass can be found HERE Thanks as always for reading; sharing this blog on your social media sites; and your feedback and comments. I appreciate it. Have a good week – God Bless – Fr Jim. Audio: Audio:   Also you can get the audios of the homilies from iTunes as a Podcast: https://itunes.apple.com/us/podcast/fr-jim-cherns-homilies/id1440618142?mt=2

About a year ago, Sally Kohn, who is a political commentator on CNN and describes herself as an openly gay left-wing commentator did something brave and bold. She reached out to people who follow her on social media. But not fans or supporters of hers. Instead, she contacted those who wrote some of the grossest, vilest, most hateful of things you might ever read. People who participate in what’s called “internet trolling” – a type of bullying online where people will write some of the most inflammatory outrageous things to get attention for themselves or divert attention for whatever the initial posting was about. Sally said she expected that some of her political posts would generate a wide range of reactions from people- but was startled by the fact that even the most innocuous of posts – like a picture of her dog in the park would get a rise out of people, causing them to post all kinds of horrendous things. Executives from Twitter told her that she had, what they described, as “some of the worst trolls on the platform.”

So she decided to reach out to some of her “trolls” including those who were most vicious to her online, as research for her book “The Opposite of Hate: A field guide to repairing our humanity.” She would message them first, speak with them on the phone, ask them about the messages they sent her. But she would also asked about their lives, their hobbies, their viewpoints – and also why they were on social media in the first place. She explained that not only did she want to “understand why they did what they did online but also who they were offline, in real life.” These conversations revealed three things that Sally found most surprising. First that people feel less inhibited online – that for some they feel that posting these things are only happening in their imaginations, like they were venting in a journal. Secondly, they didn’t think what they wrote (their posts, their tweets, their comments) mattered because they didn’t think their voices mattered or, even sadder, that they mattered.   One of her “trolls” wrote back to Sally’s first contact saying “My apologies to you/whoever handles your twitter ma’am since I have tweeted some [crappy] things in your direction.” Another wrote, “Well honestly, I kind of figured no one reads or cares” revealing a defeatism that said they felt invisible and voiceless. The final observation Sally made was, quite simply, that everyone is suffering.   That doesn’t sound like an earth shattering conclusion, which she agrees to, as she explained: “I already knew this, of course, and I also know there’s much greater suffering in the universe than being a TV pundit, visible enough to get hate mail. Still it’s one thing to know that at a theoretical level and something else to experience it directly. Here I was calling my trolls to confront them about the minor irritations they’d caused me and they were barely scraping by on Social Security or in jobs they felt were pointless.” 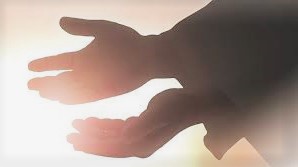 So often, when challenged with Jesus’ command, which he expands upon to great lengths in today’s Gospel, to “love our enemies… do good to those who hate you, bless those who curse you…” those words kind of stay in a theoretical realm in many of our heads.   This expectation that we will follow His example of tremendous love, and mercy – for many of us is something that stays on a list of things we know we ought to do, but struggle to imagine is even possible.   Maybe we even add it to the list of things we bring to confession and ask Jesus to forgive us for – our inability to do those things – or even to try … (That might be an Italian thing, we figure, hey, He’s got to forgive us… that’s His whole thing)

And Jesus does forgive us… Because He knows how incredibly hard and challenging this command is. Because Jesus isn’t some self-help guru just telling others what to do. This was a lesson he taught in word, and in deed throughout His life. No matter how often different people or groups tried to undermine Him or trap him or manipulate Him, He kept going back to them to offer His teaching, His example, His healing… all the way to his last moments when His love was rejected by those who hated Him in His Passion and Death. It’s something that we recall every time we stand before a crucifix. We see the enfleshment of love – pure and innocent; cruelly rejected, tortured and killed in a horrific and gruesome scene. Even then, up to His final breath he offered words of forgiveness. And one of the first words he offered when God raised Him from the dead three days later were words of Forgiveness, of love and peace.   He did that – and calls us to do that, because He knew the transformative power this radical love can be. The new life that can come from that.

For example, Megan Phelps-Roepr is the graddaughter of the founder of Westboro Baptist Church – the “Church” that are known for just being anything but Christian in their messages and actions. Their members are seen protesting soldiers funerals, or the funerals of those who have died in a mass shooting utilizing the fact that these are high profile funerals with a lot of media attention and standing out there with messages of hate against those who are gay or lesbians. It’s like online trolling, but in real life. Megan though, was tasked to be a professional online troll and specifically to go after Jewish leaders with smears and threats. One of them, David Abitbol responded back not with hate but humor and eventually even kindness. Over time, they built a friendly and compassionate relationship which eventually caused Megan to leave Westboro and renounce her life of explicit hate.

It would’ve been easy for David to “block” “mute” or ignore Megan. It would’ve been understandable for David to have responded in kind – many of us do to members of Westboro or those we struggle to love, or even worse, hate as well. But in making that decision not to give into those temptations… To make an active choice to treat this person with love and investing time and energy to demonstrate that love, not only did David protect his heart from becoming embittered, he was able to help soften and eventually help to transform  Megan’s heart.

That’s why Jesus is so emphatic about this teaching for each of us. We have to be vigilant in resisting the temptation, as hard as it is, to return hate with hate: and this could be online, in the car, in the workplace, in our homes – in our hearts…   Whenever we give into that temptation, whether it is in a public post or something we hold in the deep recesses of our hearts, it’s not something that is just a private thing that has no consequences… but is a self-inflicted wound on our hearts and souls. We allow another person’s evil act to make us forget who we are. That we are God’s beloved son’s and daughters.   Jesus went to hell and back (literally) for you and me. We are known… we are noticed… we are loved. He sees the hurts that we experience, the fears and struggles we have… sometimes because of the evil done by others. But when we pause, or stop, from returning evil for evil… when we try to stop nursing the hurt, and instead turn it over to Him- that is how we remember who we are; whose we are. That is how we remember that we do matter. Remembering that, gives us the capacity to expand our hearts to even venture to say this person is worth caring, worth loving because Jesus has looked at both of us with that same vision.

From the Cross he looked at me and said I’m worth His care, His Love.   Then Jesus’ love, His Mercy moves from a theoretical to something that truly penetrates our hearts, it doesn’t simply make us good Christians who can check off another box on the list of expectations for disciples. We see, we experience how transformative this radical love is.

For Sally Kohn, that’s exactly what happened when she took her online pests and befriended them. She said “We all suffer and we all dream, we’e all vulnerable and we’re all afraid, we all just want to be seen and heard. Understanding that changed me. And changed my trolls, too, I think.” Many of them wrote her and said how they enjoyed talking with her… sent a card wishing her a happy new year…asked how her book was coming along… and all of them stopped with the hateful posts and comments.   The experience left Sally to conclude saying “we need to think twice before labelling our social-media neighbors as trolls. Trolls are creatures who live under bridges and throw rocks, not actual people with fears and pain.”

Jesus would take its deeper than that. This is more than just making a nicer, less hateful/more peaceful world. It’s about truly believing what we say that we believe: that Jesus has made us God the Father’s beloved sons and daughters. And living that belief will make a better world – both online and in reality.