Hi everyone, this is my homily for FEBRUARY 3, 2019 – the 4th SUNDAY OF ORDINARY TIME (To the parishioners of Our Lady of Lourdes, West Orange, this was pre-empted by the “Sharing God’s Appeal” talk) The readings for today’s Mass can be found HERE Thanks as always for reading; sharing this blog on your social media sites; and your feedback and comments. I appreciate it. Have a good week – God Bless – Fr Jim.      Audio: Also you can get the audios of the homilies from iTunes as a Podcast

Tuesday night, we showed this documentary/film called “The Dating Project” to our students at the Newman Center.  It followed 4 or 5 young men and women who are somewhere between the ages of their 20’s, to early 40’s who all talked about dating.  Or rather the struggle they have dating.  The idea of the film came from a Professor at Boston College who had observed that her students really don’t know how to date anymore.  To the point that she started doing classes, lectures on it that now draw over 1,000 students at a time just to hear her thoughts, theories and guidelines on how to date. It might be  hard to believe that young adults would need coaching on something that seems so common.  But there’s a lot of reasons this has become a challenge.  One being that a“hook-up” culture has taken hold:  men and women hang out in groups, they don’t really know each other, a couple starts to talk to one another in these settings, will become promiscuous, and it’s over… there’s not really any commitment and there might not even be any expectation that there will be a follow up.   When you add how social media world has eroded people’s communication skills, you begin to see how we’ve gotten to this place.  Young adults don’t have any rules for dating – and this is having terrible effects on the generation.  It’s causing greater loneliness and depression, lack of trust among men and women.  The film claimed that we’re living at a time that has the highest percentage of Americans living single than at any time in our history.

All of this was troubling just on an observational level.  But what affected me personally was seeing how the students responded to the film. How many nervous laughs, how many knowing nods, how many tears fell that verified not just that this is a problem, but the personal hurt so many have experienced for something that should be one of the real joys of being a Young Adult.  I’m embarrassed that the whole thing surprised me as much as it did.  12 years in Campus Ministry, it’s not like these were news flashes or huge revelations.  But it’s like the extent of exactly how bad things have gotten, the ripple effects this is having, and witnessing people in real pain -hit hard.  I left the event thinking – what a crazy, crazy world we’re living in  – How incredibly hard life is and is getting for people every day.

That’s not a ground breaking or earth shattering revelation either.  What demographic in our nation isn’t experiencing great tension – feeling like things are spinning out of control?  A friend of mine who teaches in a Pre-K to grade 5 school shared that in her 25 years as a school nurse, she’s never had so many kids on anti-anxiety medication.   When I think of all the different groups of people from my life – current students and alumni who are dealing with a variety of crises, addictions, problems;  families from parish assignments or even my own friend and family circles who are suffering through separation and divorce; legitimate fears for the well being of those closest to them or for themselves…   Life is hard and seems to be getting harder every day…  While there’s plenty of people rushing in with observations, theories on how to tackle different issues, and advertisements promising help and healing to these and every other ails that people are facing; it seems there are fewer and fewer people being successful in turning the tide to the struggles that so many are facing in day to day living.

Kind of depressing to think about.  I don’t know if the polar-vortex with the subarctic temperatures just had me feeling kind of down myself.  But that was on my mind this week. And praying about that and these scriptures, the legitimate question is well, what’s the answer – where’s  the good news? 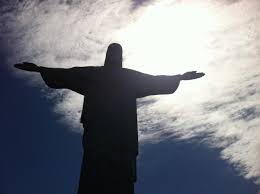 Two things:  That Jesus is with us in the midst of all this insanity…And that He has come to save us from it.  Jesus saves us by offering us Good News that can radically alter not just our lives, but the world.  This Gospel reading continues what we started to hear last Sunday where Jesus tells us His mission.  That He is the one God the Father had promised would bring glad tidings to the poor, liberty to captives, recovery of sight to the blind, to free the oppressed.   We pick up from there as Jesus tells his listeners that He will indeed fulfill all of those promises.    But what we see today is that people back then had just as hard a time believing that as many do now.

Initially people“spoke highly of him” and “were amazed.”  Who doesn’t want to hear those things?  Who doesn’t want to believe that fullness of life is possible?  These initial listeners where people from His hometown.  They had seen Jesus grow up.  They experienced Jesus’ charisma – that when he spoke and preached and was simply in their company there was something amazingly different in Him then there that was in anyone else they had ever met. They probably had heard stories about miracles happening, and were eager to see what might happen next.

The very thought that He was the Messiah would’ve been exciting because these people Jesus was speaking too  wanted to be saved.   Or at least they thought they wanted it.  In reality, they wanted the Roman occupiers who had conquered them, treated them as second-class citizens in their own homeland to get what was coming to them. They wanted a Messiah to come for them to re-established them as the “Chosen People.”  They wanted their earthly Kingdom to be reestablished, for their place as royal citizens to be certain.

When Jesus goes out of His way to correct them and saying – salvation is bigger than those earthly concerns.  That His mission isn’t about pitting Jews versus Romans but about extending God’s love to all Humanity  they feel betrayed.   That’s what was happening as Jesus cites those examples – the widow, the leper – to remind the hometown crowd how God worked through individuals who don’t conform to people’s expectations.  It was Jesus’ way of explaining to His listeners that His Messiah-ship wouldn’t conform to their expectations, either.   Jesus’ Good news of salvation is for everyone . .And they definitely got the message…  This claim was so radical – is so radical – that, to them, they lose their minds. Look at their reaction. They don’t yell at Him saying you’re a liar for saying you’re the anointed one – you’re not the Messiah after all . . . They respond in anger wanting to eliminate Jesus.

We are living in times that seem to try to eliminate Jesus as well.  If there ever was a doubt about that, it seemed incredibly clear to me as we saw politicians claiming to be Catholic one day and then cheering as they pass legislation making the already grotesque evil of abortion even more horrific as it’s allowing infanticide now.  As screwed up as the world seems to be; as upside down as our values and morals in our time have become, following Jesus has become more counter-cultural than ever.  But the truth is, if we want to experience the fullness of life, if we want those glad tidings to speak into all the areas of desolation we see, we experience, Jesus has already given us the path.  A path that forces us to have the integrity to confront who we are and the world we live in as it really is and how it could be… A path that forces us to realize the ever expanding gulf that exists between the values we profess as followers of Jesus and the values we actually live.  A path that calls us to have the courage to re-create our place in the world in the sacrificial love, the mercy, the selflessness that God calls us to.