Hi everyone, this is my homily for NOVEMBER 11, 2018 – the 32nd SUNDAY IN ORDINARY TIME.  The readings for today’s Mass can be found at http://usccb.org/bible/readings/111118.cfm  Thanks as always for reading; sharing this blog on your social media sites; and your feedback and comments.  I appreciate it.  Have a good week – God Bless – Fr Jim

It’s hard to believe that September 11th became a day of infamy over 17 years ago.  Maybe it’s because living in this area where the World Trade Center stood only 15 miles from here and we can see the construction of the “Freedom Tower” on the site where the Twin Towers stood that there’s not a day that goes by that I don’t think about September 11th -the victims, the horrible memories of such a dark time in our nation’s history.

But I also remember the stories of greatness in the midst of such horror – stories of incredible heroism.  Of the over 3,000 people who died that day – there were ordinary men and women who ended up sacrificing their lives to help save others.  There were rescue workers – thousands of men and women from the Port Authority Police; the NYPD; the FDNY who were on the scene moments after these terrifying events began – and many more who stayed on scene for days and weeks after to try to save and rescue as many people as possible.

One such story is that of Firefighter Stephen Siller.  Stephen was the youngest of 7 children and lost both his parents by the time he was 10 years old (and from that point on being raised by his siblings).  That experience helped to emphasize the importance of living life to its full.  While that phrase can be used in ways that are somewhat shallow – like a person who simply takes care of themselves and “enjoys life,” for Stephen, living life to the full meant having  5 kids of his own – working three jobs to support them, and still finding time to help at his own parish of Sacred Heart Church in West Brighton, NY with their Youth Council, coaching their CYO 4th grade basketball team. 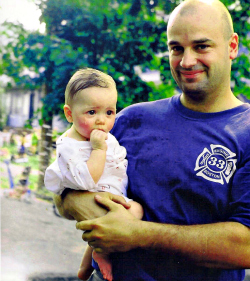 On September 11th 2001, he was looking forward to take advantage of the spectacular sunny day for a round of golf with his three brothers when he heard on his fire department scanner the news of a plane hitting the World Trade Center.  He called his wife to ask her to pass word to his brothers he would meet up with them later as he went to his fire house to meet up with his squad who he assumed would be enroute to the scene.  Arriving there to find they had already left, he grabbed his gear and started driving himself to the scene and got as far as the Brooklyn Battery Tunnel, which by then was closed to traffic for security reasons.  Stephen grabbed his 60 lbs of gear and ran almost 3 miles to the World Trade Center site, and was last seen running into the buildings – where he would along with 342 of his brothers of the FDNY die that day.

His family took their grief, their pain but even more their love and admiration for their brother and have decided to follow in his footsteps.  Literally.  Every year since 2002, they’ve sponsored the “Tunnel to towers run” from the Brooklyn Battery Tunnel to the World Trade Center site as a “living memorial” to their brother and all those who’ve perished (which I hope to run in next year).  That run has become an incredible fundraiser for the Tunnel to Towers foundation – a foundation his family created to capture Stephen’s example of “doing good” by living selflessly, lovingly for others.  In the 16 years since it’s creation, the foundation has raised funds for burn centers in NY to spread that assistance to all sorts of causes both locally and across the nation.

When you read about Stephen, he sounds like the guy you want living next door to you.  But the beautiful thing to hear is how so many could hear his story – knew his story and decided to live as selflessly for others because they were so inspired by him.  Stephen Siller pouring his life out for others wasn’t a new thing, it was simply solidified as he made that final run on 9/11 to try to help others.  And his example affected so many of those who knew and loved him they’re doing the same and you see how they are changing the world one needy person at a time.

That is what this beautiful Gospel story is about – offering something out of Love.   Not just something – everything… This widow, this lady is as poor as poor can be. Her entire life savings basically amounts to a few cents. And what does she do with that pittance?  She offers it to temple treasury.   Someone witnessing it could ask with all logic What difference is that going to make to the temple? There were wealthier people making offerings of much greater amounts.   So imagine, some billionaire, drops a million in the collection.  That’s a big deal…   What goos are these pennies from the widow going to do? Now instead of having 1 million dollars they have 1 million dollars and two cents…  Now they can build that new temple?  These few cents sealed the deal?   Meanwhile, she’s can’t afford to do that… she’s given all she has left… what’s she going to do now?   In our moments of rational thinking, we would argue it seems quite foolish and reckless for her to do such a thing. 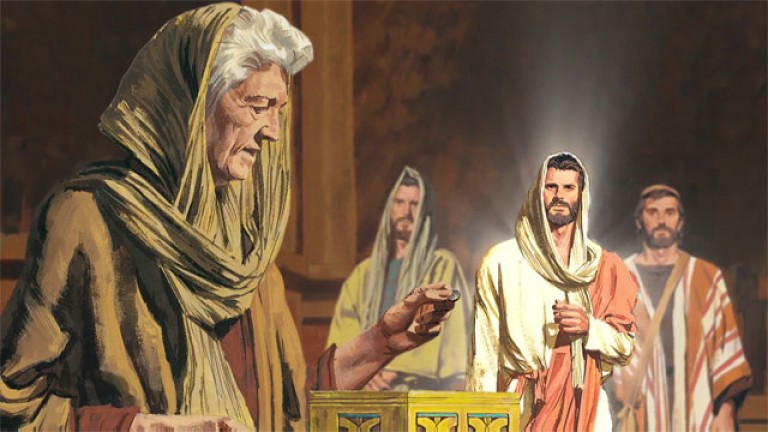 But you know what – she didn’t ask us for our opinion. She didn’t ask to be noticed. This isn’t about her contribution being compared to another on some spread sheet. It’s simply her way of putting her money where her mouth and her life is…  Because she’s come to the realization that the only thing that matters to her is God. Yes her husband has died, yes being a widow has made her vulnerable – she’s lost a lot already. Yet, that didn’t make her bitter – it made her cling to the one thing – the ONLY thing she knew for certain she had in her life – which was God.    So, out of love for him, she offers all that she has. She gives the only thing she physically possesses – a seemingly insignificant amount of money.

Over the last 19 years of being a priest I’ve seen, very sadly, that many people have a warped understanding of what true love really is,  so they don’t know how to offer it themselves.   So a guy and a girl hook up with each other for a night and they whisper “I love you”– that’s not Love.   A parent or a spouse makes outrageous, guilt ridden demands and says “If you love me you’ll do this” – that’s not Love either.   And sadly there are countless other stories or examples of destructive, or manipulative behavior that people have been told or led to believe is loving behavior and that is shockingly sad.  If those are people’s experiences or understandings of love then these stories do seem unreal or ridiculous. Then those voices saying “how foolish how reckless” these acts of offering one’s entire self out of “love” are understandable.

If that’s a voice you’re hearing in your head, I’m sorry for what you’ve gone through or whatever it is that has led you to believe those lies.   Because – the reality is we can’t read the Gospels, and not walk away with an overwhelming, earth shattering revelation: Jesus Christ loves us with this same foolish, reckless love. God loves us like this. The creator of the Universe – who LOVED YOU AND ME INTO EXISTENCE. He loves us by sacrificing His son on the cross for us.  He loves us by giving us His Son in this word and in the Eucharist – He tells us we are to follow Him and His example – which is a life of complete self-emptying, giving up his life, giving up everything for you and for me.

That’s why Jesus is touched and moved when he sees the poor widow acting with that same foolish, reckless abandon. He sees she gets it.  That she’s been changed by the God who has so foolishly, recklessly loved her, –  she loves Him like that – by giving all that she has left to Him, knowing he won’t abandon her or even more importantly – He won’t let her faith be shown to be foolish or reckless.

The world would have understood if Stephen Siller’s family and friends had withdrawn, given into their grief, become isolated – recognizing how much they had already lost, judging the family has been through enough.  That would have been seen as completely reasonable.  Yet as much as they mourn his loss, they have been forever changed by his loving example.  Rather than simply staying in their grief and their pain, they have taken his example to change them into becoming even more generous, selfless themselves.

What about us? With this Gospel reading, I don’t think Jesus is putting to us a challenge — where he sends us home to “prove” whether we love him with that selfless, self-emptying, giving love for him tonight or not (and saying, if we do, we’ll empty your savings accounts to show that – anytime you hear a preacher recommending that, run away as fast as you can).

The Gospel is not about our bank accounts. It’s about our hearts. And that takes a lifetime for us to truly offer to Him.   In order for that to happen, The challenge Jesus offers us is with the radical but fundamental, and essential starting point – do we actually believe that He loves us like that?