Hi everyone, this is my homily for OCTOBER 14, 2018 – the 28th SUNDAY IN ORDINARY TIME.  The readings for today’s Mass can be found at http://usccb.org/bible/readings/101418.cfm  Thanks as always for reading; sharing this blog on your social media sites; and your feedback and comments.  I appreciate it.  Have a good week – God Bless – Fr Jim

This has been a rough week for me…  first the Yankees choked to those nasty, nasty Red Sox’s from Boston… and I’m not a huge NFL guy, but the Giants losing to Philly Thursday didn’t help improve things.  But even worse was that I’ve lost the Mega Millions Lotto the last four times (when the Jackpots ranged from over $370 million to over $550 million on Friday night AND I’ve lost the last three Powerball Lotto which while not as big as MegaMillions was still impressive with Jackpots topping $350 million.

I’ve been very clear in my discussions with the Lord about what I would do with these winnings.  In the Bible, we’re called to “tithe” meaning to contribute 10% of our earnings to the Lord – I’ve told the Lord that I would only keep 10% of my winnings – which I think is pretty sacrificial (keeping only $55 million of $550 million is pretty generous, don’t you think?).   The rest I would donate and use for all sorts of good causes.  There are some charities and causes that are near and dear to my heart from pediatric cancers and helping kids and their families through their worst nightmares (as my family experienced) to different outreaches to the poor and the homeless.   I’d take care of my family and friends.  But one of the biggest things I’d do with a jackpot is for the Newman Catholic ministry that I’m at right now.  First I’d build a New Newman Center – oh man what we could do with some mega million cash there – replace our 100+ year old houses with a new state of the art facility, handicapped accessible, indoor pool and recreation center;  purchase some vans/buses for our bigger events – hire more staff…. – and with that 10% that I kept for myself, I would probably get a place down the shore (maybe a helicopter too, just because I can’t stand the insane traffic on the parkway)

Why oh God must you mock me?  Despise my pleas?

That part is a joke… I’m not blaming God and I don’t ever pray to win – although I do remind Him what I would do if I win, just in case He needed the reminder.  As I threw out  my losing tickets, again, the other day – angrily that I didn’t get one freaking number, and then picked up the scriptures – it was an Oh geez moment.  Dang it – this rough week was going to get worse with a smack down from Jesus for me.

With this story about the Rich Young Man, what’s at the core of this encounter?  You have a guy who is sincerely trying.  More than trying, he’s succeeding at following God’s law.  As he goes through the various commandments God has given, he’s like- KILLED ANYONE – No- check   STOLEN ANYTHING – NO – check – ADULTERED – NOPE AGAIN – check.  He’s all good.   And even more – this guy is already rich and wealthy – so more than likely he’s tithing and making his temple offering.  He’s doing all the right things.  Despite all of that, (and despite his mistaken belief that God has rewarded his goodness by making him wealthy) – none of this is enough.  There’s something within himself that feels something is missing.  He sees Jesus this “good teacher” and that causes him to ask Jesus – what is it that’s missing?  “what must I do to inherit eternal life?” 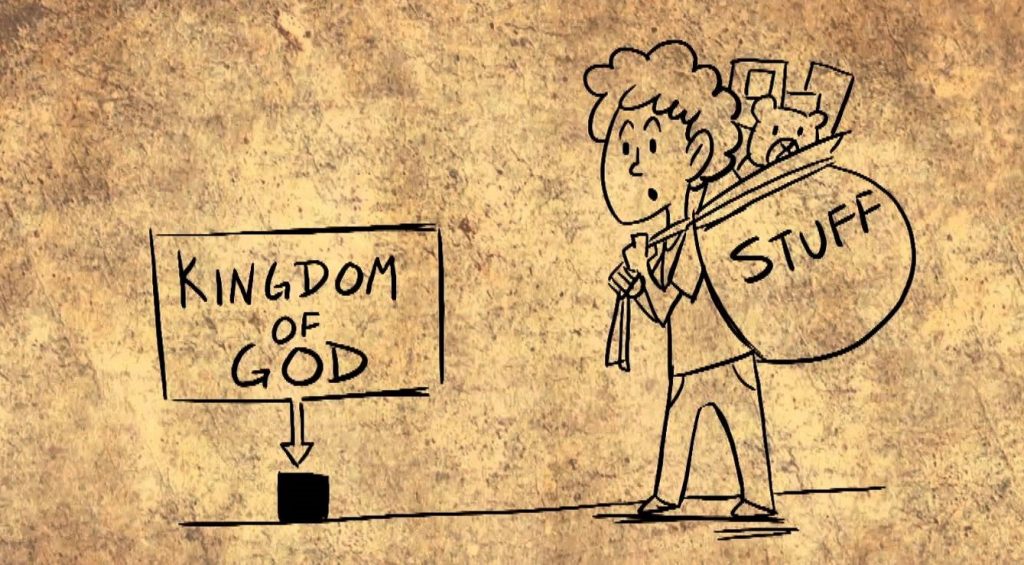 It’s not that what he’s doing is bad “as is.”  Following the commandments that God has set out for us is essential.    But that faithfulness has opened a desire within the guy to experience the freedom of eternal life right now – the assurance of it, the security of it, the confidence in it – He desires that.  He desires God.  The intimacy and fullness of life that comes from that ultimate union with Jesus.  Following all of God’s commands and being a good man isn’t enough for him which is what stirred this restlessness within him to even cause him to question Jesus.

He’s being called into discipleship.  That’s why he’s going to Jesus.  That’s why he’s asking Jesus what more he needs to do.  And more than likely, he imagined some ideas what that more might be:  – maybe make that tithe 15% instead of 10…  Honor not just your mother and father, but their friends too…

He didn’t see it coming – when Jesus would say give it all up – give all you have right now – give up what you see as a good thing, what you see as your blessing – your wealth – and follow me…”  With that he walks away – sad – because he has so many possessions.  Yes, he sees Jesus as a good teacher.  But he’s not ready to trust Him that much.

Which gets back to my being smacked down.  I know I can find myself in that same position.  I want to win the powerball or mega millions so I can do all these good things for Jesus…  which would also make my life probably a little bit easier.  Not just the helicopter to the shore house – but all those dreams and plans for a new Newman Center and things for the ministry… all the ideas I have that I think a jackpot would make this ministry so much better, so much more effective than they are right now..  But the thing is, when I allow my brain to go down these fantasy rabbit holes, I don’t recognize that I’m already denying how good the Lord has been – and is to me…  All the blessings I’m already enjoying.  All the ways that he’s working in my life and tugging on the hearts of so many other people to glorify him in the different ministries, different encounters, different situations that I think that I have better plans for.

This Gospel isn’t about everyone emptying out their bank accounts, giving them all to the poor adding that as another checkmark on the list after the commandments to show we’re all good… It’s asking how much do we trust Jesus ourselves?  How much do we trust Him?

Being here at Mass this Sunday is a great first step for everyone of us.  That we’ve made the choice, the decision to honor the commandment to keep holy the sabbath, to worship God, to express our love for Him – that’s a great thing.  And I’d venture to guess that the rest of the commandments we’re striving to follow/observe them.  (If we’ve failed, we can go to confession and get back to maximum-good status on that front too)   All of that is great, it is essential foundational steps.

But this Gospel isn’t for us who aren’t millionaires or billionaires or Powerball/MegaMillions winners to look at ‘those people’ as ‘getting taken to task’ by Jesus.  That’s way too convenient for us to think this Gospel is directed towards Jeff Bezos or Bill Gates or someone who we think is wealthy that we can kind of excuse ourselves as they’re getting taken down a notch.   At the heart of this Gospel, we’re being asked what is it that’s holding us back from trusting Jesus even more…  What’s holding us back from following Him ever more closely.  What’s blinding us from seeing where we are already blessed – and where he’s already working in and around us.  How are we still falling into that false belief that we’re telling ourselves that when we get that promotion, or that raise, or that recognition, or that miracle- that then we will believe that God is blessing us, then we know God is rewarding us, then we can be sure that God loves us. . . then we will be happy.

Jesus puts it simply.  When we let go of our possessive clenching of our riches and possessions, when we let go of those ideas, those notions that we’ve made for ourselves as validation of God’s love for us – and just grab hold of Him, trust Him, follow Him – it’s then that we’ve gained the true and ultimate treasure of eternal life right here and now.