Today we celebrate the Exaltation of the Holy Cross, a special feast on the Roman Catholic calendar.  In the Archdiocese of Newark, this has been designated a special day of Prayer, Fasting and Abstinence in response to the revelations this past summer regarding one of our former Archbishops and the ongoing revelations of sexual abuse and harassment on the part of priests.

Think back to some of your worst days.
Pleasant introduction, I grant you… but stay with me. Maybe it was the big game you blew. The “one” who turned out to be very much not “the one.” The test you choked on.
Depending on our ages and life experiences, those “worst days” probably extend – maybe into weeks, months even… and can grow more serious. The class you failed. The serious illness of a friend. The death of someone you loved.
Psychologists, therapists will tell you that depending on how deep or painful the impact of these difficult memories surrounding these worst days, that individuals can find it hard to even encounter something associated with it. We often refer to these things as “triggers.” For example, I had a relative who never drove a car again after surviving a serious car accident (even being a passenger in a car decades later was a difficult thing for them) Whether it’s the sight of a football field angers you years later as you remember missing that touchdown or seeing that deli that your grandfather loved who passed away makes you sad – we probably all have something if not several of these types of things that consciously or subconsciously we try to avoid – because we want to avoid remembering these painful things.
Today’s feast remembers quite an interesting event. We remember that on this day in the year 326 that St. Helena discovered the actual cross that Jesus was crucified on when she was in pilgrimage in Jerusalem. The instrument of torture, the beams which held Jesus’ innocent, sacred body in one of the most gruesome forms of execution man has ever imagined was found.
The Cross. For the people in the Roman empire, any Cross would be repulsive. They had seen and heard the horror first hand that it inflicted on countless numbers of people the barbaric regime put to death. It was used intentionally to be a brutal punishment on whoever the Romans deemed “criminals” and to frighten people into complying with their authority. Jesus wasn’t the last to die on a cross – as countless others, including large numbers of Christians (including the apostles Peter and Andrew) would suffer the same horrific end to their physical lives. 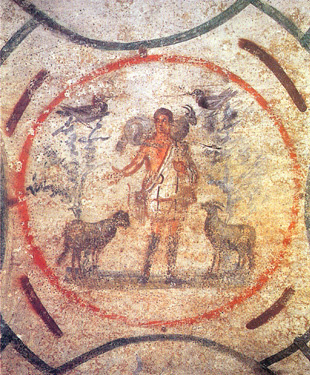 So just the sight of the cross would be a trigger for Early Christians. It’s one reason that Early Christian art and symbols didn’t contain any cross. The Earliest Christian art often times would depict the Good Shepherd, or the Fish symbol, or Greek letters spelling out Jesus name.
I wonder when that all changed? Was the discovery of this, the true Cross of Christ, coupled with the reality of Jesus’ resurrection from the dead the beginning of a new realization among Christians? When they no longer feared the site of this instrument and instead began to grow to revere and love the Cross?  Recognizing that what was one of Jesus’ worst days, was freely offered on His part… which is what made it a Good Friday for us -a very great day. A day where Jesus said for all eternity that He will destroy all that could destroy any one of his beloved… That He conquers sin and death. All we know is that at some point that shift in perspective happened that we embraced something that would have been a “trigger” of horror and it became a symbol of who we are – as Christians.

Hopefully, as we celebrate today this Feast of the Exaltation of the Holy Cross, even more, it’s a reminder of whose we are, purchased by that Holy Cross. Particularly as we continue to face a “worst day” from time to time. Things that make us scared, or overwhelmed, or struggling. Things that discourage and depress us. We celebrate the Cross and look to Jesus Christ who on the Cross conquered sin and death for me and you for all eternity. We celebrate at this Mass, Jesus’ crucifixion and resurrection being made really present in the Eucharist and being given to us to feed our body’s and souls and to transform them. Then the Cross ceases to be a trigger or even (more common in our day and age) simply a fashion accessory or something to mark a building, but a reminder of the true meaning it contains and our duty to share this good news with everyone we encounter.