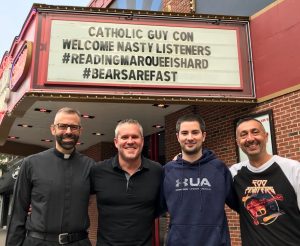 So for those of you how follow me on Social Media (Twitter, Facebook, etc.) you probably saw that this past weekend was “CATHOLIC GUY CON” – an event that started out as a joke on air over 6 months ago: where some super fans (and simply super people) got more and more serious about wanting this to happen.  Eventually the host of the show, Lino Rulli asked Mark Hart (aka “Nasty Bible Geek”) Tyler Veghte (aka “Nasty Muppet”) and myself (aka “Nasty Priest”) would we be up for doing this?
Never in my wildest imaginations did this weekend go the way I ever imagined it when we first were joking about it.  For a lot of different reasons.
By Thursday afternoon, after a summer where Catholics have just been deluged with a re-emergence of one of the most atrocious chapters of sinful history in the Church, the clergy sex abuse scandal, I really felt depressed by it all.

First, the bringing to light – awful layer upon awful layer of information about from the former Archbishop of Newark, Theodore McCarrick… followed up by the painful recounting of how wide and deep the scandal has been destructively undermining all that is good and holy in the Church in just one state, Pennsylvania, for over 70 years being shared this past week… interspersed with variations on the reports, gossip/speculation being posted online; and some friends and acquaintances sharing with me for the first time ever that they too are one of those who felt voiceless after suffering themselves to this evil in the Church…

I don’t know the word that describes where I was at Thursday afternoon other than numb.   This whole thing was and is too much.  By Thursday when I was packing my bag for what was supposed to be an opportunity to connect with fellow Catholics from all across the country and Canada (one listener traveling over 2,000 miles just to come) – to laugh, and meet, and laugh – and pray (at least a little bit at Mass) and hopefully encounter and experience authentic community – I must admit I didn’t have any idea how or if I could do it.  My mental and spiritual reservoir felt completely tapped out.
The only things that got me on that plane was – one – a sense of obligation – that I had made this commitment and – two – people have been so hurt and let down by the Church in grossly spectacular ways, I couldn’t dare risk causing the slightest of hurt to anyone else in the Church it at all possible.
Far from the attitude I wanted to enter into this weekend.  I dragged myself to the airport – and simply prayed for the strength to get through all that we had committed to in the hours from Thursday night through today, this Sunday Morning. 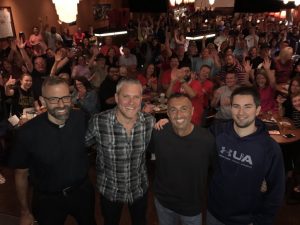 And I’m humbled once again… How good our God is.  You’ll hear and see online people posting “#CatholicGuyCon18” pictures, jokes, stories, and people sharing in their own way how much fun they all had.  But for me it was therapeutic.  It wasn’t just a crazy, goof-fest- but an encounter of incredible joy.  The excitement for 200 random strangers from all over the country to come together, meet, interact, and bond so immediately… the somewhat superficial, or rather limited,  “virtual” encounters and relationships being replaced by authentic ones.  And the love that people have – for each other – for all of us who have some part on the show – and for their faith (Catholic, and as Lino says it everybody else ) was profoundly beautiful – and a much needed respite from what’s been an awfully long summer.
Landing back here in NJ and simply opening my email, sadly, I’m brought right back to reality.  This scandal and crisis seems to be getting worse day by day – and I suspect it will continue to do so, rightfully so for some time.  All that is evil and depraved must, for the Love of God, come to light and dealt with appropriately.
But the gift that this weekend was for me, was a reminder of what joy still does exist in true, genuine faith.  A joy that we have to fight even harder than ever to find in the midst of some extremely dark times.  And once we do, not selfishly hang on to it , but to share that joy – as selflessly and completely as we can. In that light, I’m sharing the homily I offered Saturday night at a Vigil Mass for the Catholic Guy Con attendees hoping to share a little of the joy I received this weekend with all of you… as we continue to pray for the Light and Love of Jesus to bring the purging, the healing, the restoration we need so that Joy would be a more common thing for all Catholics…
In Christ — Father Jim 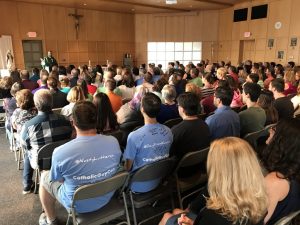 HOMILY:  I’m surprised or Thankdul that the Nasty Muppet didn’t have the homily on the spot music ready to go.
Now that we got that out of the way.
Something that Lino said last Friday, when we were doing the show really shocked me.  Lino said something?… Lino really said something…  If you listened last Friday (and if you didn’t, what’s wrong with you?… how dare you come out to Minnesota after missing a show) You heard my shock.  Because it’s like Lucy pulling the football away from Charlie Brown (yes, in this example, Lino is Lucy and I’m Charlie Brown) I am so trained for him not to make such a deep point and to completely goof on me when I do, that I kept waiting for the punch line.  But this time, he actually didn’t… which gave him a whole other reason to goof on me.
Lino said he wondered why everyone was coming to this insanity fest that we’ve called “Catholic Guy Con.”  A variation of Jesus’ words to the apostles when He first called them and asked them “What are you looking for?”
Thats probably a question – that you’ve heard variations of for the last few months… “We’re going where?” a spouse might have asked as the other informed them they had already purchased these tickets and were flying out to Minnesota in the middle of August to hang out with 4 lunatics on the radio and a couple hundred Nasty Listeners.  “Why are you going to that?” you’re friends might have asked as you told them what your plans were for the weekend.
What are we looking for… why are we here?
I’m sure that many of us all have a lot of good, valid, legitimate, funny, off beat answers and reasons. 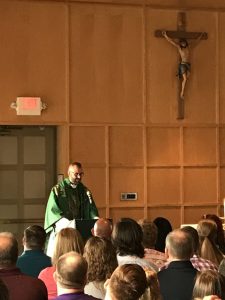 This being Mass, and thankful that Lino won’t interrupt a homily, I know that  deep in his heart one of the main reasons he’s on the Catholic Channel – that he does this show (and not continuing to win Emmy Awards working for the secular news / entertainment industry) is that he knows Jesus called him to this work and he sees the value of it.
The reason that Mark Hart and I endure the weekly insanity is because we know Jesus has called us to this work and we see the value of it.
The reason Tyler is here is because he needed a job… and we’re thankful (thankdul?) for that.:)
And we know that what Lino has been talking about over the last few months or even the last few years that he’s done pilgrimages and gotten to meet and spend time with listeners and realized he was onto something bigger – was true…
The reason all of us are here, the reason we’ve all come from all around the country, and even from Fake America (Canada) – is that we recognize that Jesus calls us together to form a community.  Yes on an initial level -The Catholic Guy Dysfunctional Family.  And to celebrate this fun, unique, community.
But  the Gospel and this Mass very beautifully takes this a step further.   We have all come here from a lot of different places -physically, emotionally and spiritually; and we may have come here for a variety of different reasons…
But right here, right now – in this Eucharist, Jesus calls us to something bigger.  Something deeper.
Something that lasts beyond this weekend or this “con.”
Something that unites heaven and earth…
Something that unites all our departed loved ones and us here and now.  Something that will keep us united when we all go our separate ways tomorrow.
In inviting us to eat Jesus’ flesh and to drink Jesus’ blood – we are being invited into the very life and love of Christ.   That remains a difficult thing for a lot of us to wrap our heads around.  Obviously the first listeners were confused – as we’ve heard this section of the Gospel at Mass for the last three Sundays.  They were more interested in having more loaves and fish.  They couldn’t see or understand anything more than their physical hungers.  Or rather, didn’t believe that anyone or anything could feed those deeper desires, longings that every human being encounters.
We have the blessing of 2,000 years of faithful reflection on all that Jesus said and did to have a better appreciation and understanding.  We have learned that in this supernatural gift, we consume the very body and blood of Christ.  We have heard stories and testimonies how that feeds those deeper desires and longings from here and now into eternity.
And in a weird way, the show, this convention, can be a way of affirming our own personal faith and understanding.  (As shocking as many might be by that revelation)  Because if God can use four goof balls, joking with each other on air for 10 hours a week to somehow touch our lives and somehow possess us to want to come out and meet one another and somehow form this community… just think about what else God is capable of.  Think of the miracles that He has done in our very lives that makes our very being here a gift… and the even greater miracles that He can do for us, if we approach this altar with a deeper openness to believing that Jesus means what He says… and receiving Him… and letting Him transform us now and always…