Latest News
Home /Blog/DON’T. GIVE. UP.
Hi everyone, this is my homily for the 19th  SUNDAY IN ORDINARY TIME.  The readings for today’s Mass can be found at http://usccb.org/bible/readings/081218.cfm  Thanks as always for reading; sharing this blog on your social media sites; and your feedback and comments.  I appreciate it.  Have a good week – God Bless – Fr Jim 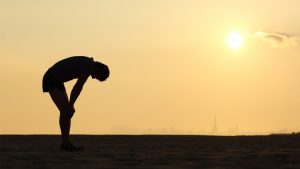 HOMILY
If today’s scripture readings could be summed up in three words – they could be DON’T GIVE UP.

We probably all need to hear those words from time to time.  Especially when you’ve  had that feeling – or maybe even said it outloud “THAT’S IT I’M DONE.”  I probably could give you a list of times where that came to my own mouth. At least a few times yesterday sitting in traffic on the Garden State Parkway on the way to a wedding.  But more seriously, how often do we feel or think those words because things seem too difficult, too challenging.  We feel overwhelmed; exhausted.; intimidated.  We’re just worn out.  And it can be any of us in any stage of like:
–        A student – whatever grade that might be – just looking at the calendar or the non-stop Back to School ads have snapped them out of the Summer lull to realize a new Academic Year is coming up and failures or difficulties from the past start to eat up on them;
–        For those a little older and done with school, working day in day out in in this complex world where words like“stable” and “job” are being used together less and less frequently is filling you with anxiety or your dissatisfied with things as they are;
–        Married couples, with kids worried about their future not to mention their own…
–        If you’re alone – maybe divorced, maybe widowed and just that forced solitude wears on you…
–        Those going through illness and the pain, the suffering, the unknown has them filled with fear or anxiety.
–        Maybe you’re just discouraged, disillusioned by scandals, controversies, failures in leadership – whether that should be in our Church, our government…
The point is, we all can probably list off a heck of a lot of things that get us to that breaking point where we want to say “THATS IT I’M DONE”
In all of those different experiences that people are faced with and that we can find ourselves bringing before the Lord in our prayers, that God’s Word today says those very simple words, but bold words that are meant to be hopeful – Don’t Give up.
Just look at what we’ve just heard.  Often times when I’m preparing a homily, I’m naturally drawn to the Gospel and jump off that.  But today’s first reading is a real doosy.  We hear from the Old Testament book of Kings and we’re hearing about one of God’s prophets named Elijah.  As one of God’s prophets, Elijah had a pretty straightforward job – to proclaim God’s word to His people.  Straightforward, yes… Easy?  not by a long shot.  Why?  Well if you wanted to learn where the phrase “don’t shoot the messenger” came from, it had to have been the prophets!   Which makes sense.  If people were doing God’s Will, following His commands, living by the covenant that they had agreed to with Him, there would be no reason to send a messenger.  People would be in right, good relationship with the Lord.  So prophets are constantly speaking words to people that they didn’t necessarily want to hear. 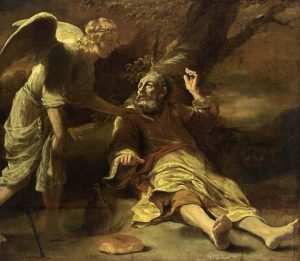 In this case, the people who don’t want to hear what the prophet has to say (and in effect, what the Lord wants to say) is a person – and a very powerful person – Queen Jezebel.  One of the reasons the name Jezebel has negative connotations is because of this episode.  She is so ticked off at Elijah that she’s sends murderous henchmen out to take him out once and for all.  So Elijah’s on the run for his life.  He finally comes to this desert, finds this tree and as he is catching his breath for a moment what does he pray:

This is enough O Lord – Take my life!
There’s something consoling to know that a revered prophet who’s life and words are forever remembered in the Sacred Scriptures had a bad day, isn’t it?    Because as the People of God in our day and age – I think we’re afraid to admit that we can get tired… We can grow weary…   The world around us seems to be spinning out of control.  People seem polarized, tense, angry about lists of issues.  And for those trying to live a good, decent life, we can appreciate the prophet’s sentiments.
But what does the Lord do for Elijah?  Does he scold him for his lack of faith, for being weary, for saying words that strike us as blasphemous?  No, he doesn’t do any of that.
Does the Lord magically take care of all that troubles Elijah?  Does he send that Jezebel where she belongs?  Smiting or smoting Elijah’s adversaries?  No he doesn’t do that either.  The Lord sends a messenger, an angel  to Elijah’s side ordering to eat and drink not once, but twice with the words – “Get up, eat, or else the journey is going to be too long for you.”  Don’t Give up Elijah….
Yes, Taste and see the goodness of the Lord – not just Elijah, but you and I sang those words of the psalm today in response to that reading.
Even St. Paul in that second reading seems to be speaking those same words – Don’t give up.  Last week and this week’s passages (and some verses that the lectionary skipped in between) from St Paul’s letter to the Ephesians talks about the difficulty for us to resist very human temptations, and human failures.   He notes how we are in this struggle between feelings of“bitterness, fury, anger, shouting and reviling… malice” and striving to be imitators of God as beloved children and to live in love.   But Paul’s confident we can do it if we don’t give up and draw upon the gifts of God.
The greatest of the gifts of God is revealed to us in the Gospel.  Unlike Elijah receiving a simple hearth cake and a jug of water, Jesus offers himself to us as THE bread from heaven  that you and I are to feast on both in this word we are hearing now and in the bread and wine which becomes His Body and Blood on that altar.  It is He himself that He wants us to eat, to nourish on, to consume in our body’s and souls so much so that when we are worn down, tired, when we feel the world has abandoned and forgotten us – when the day to day struggles and trials blind us to his presence make us forget his promises and make us feel like we’re never going to get ahead,  we will still hear his invitation calling out  to us to feast on his Flesh – enabling us to live forever – promising us he will not abandon us, not now or ever… If we believe in Him, we can listen to him as He tells us:
don’t grow weary,
don’t lose heart,
don’t lose focus,
… don’t give up.