Latest News
Home /Blog/WHAT’S THE USE?
Hi everyone, this is my homily for the 17th SUNDAY IN ORDINARY TIME.  The readings for today’s Mass can be found at http://usccb.org/bible/readings/072918.cfm

Sadly, again, I had worked on this homily before the most recent news regarding the sexual abuse scandal regarding the former Archbishop of Newark Theodore McCarrick, broke Saturday (with him resigning as a Cardinal)  As you’ll see, this scandal still is very much on my heart and mind and is therefore a part of my preaching.  Much like it was hard not to discuss 9/11 for days, weeks and months after that horrific event, this horrific scandal is weighing just as heavily.  But I apologize if this homily doesn’t go far enough or take into full account where we are with all of this news.

The magnitude of all of this is taking a lot of time to digest. As a priest, my first responsibility is to pray… and to pray first and foremost for all the victims.  That’s what’s been most on my mind these last weeks – those who were not listened too, those who thought they had no voice, those who were not only abused physically, emotionally, mentally – but spiritually as well.  The feelings of anger, shame, embarrassment that some in the Church that I love and have given my life to could have done such things – and been protected by others have been difficult feelings to navigate.  I know that I’m also called to pray for Archbishop McCarrick and other perpetrators of these scandals.  In all honesty I’m not there yet… That’s going to take a lot more time for me to be able to do.    My previous post on all of this seems a bit dated now and hopefully in time, I’ll be able to put some newer thoughts together – but here is the link to that initial post:

In the meantime, thanks as always for reading; sharing this blog on your social media sites; and your feedback and comments.  I appreciate it – Fr Jim 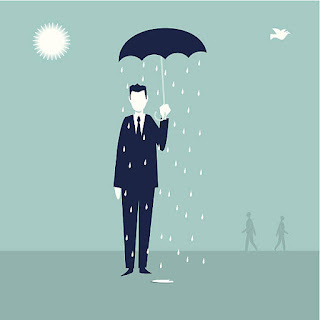 Who cares?
What good will that do?
What’s the use?
How often have we encountered these types of feelings, attitudes, sentiments.  You may have heard them from someone else in response to something you were troubled by.  Maybe you’ve found yourself saying these things …
–  Someone’s going through a difficult time in their marriage… they mention it to a family member saying “I was thinking of looking for a marriage counselor or therapist or something” and they hear “Why bother? … as this person gives you a litany of reasons why you shouldn’t bother.
– There’s trouble at work or in school – I’ve definitely have had this happen with both college students I’m ministering too as well as friends, parishioners even fellow priests – they’re having trouble in school, they can’t register for a class they need; they’re struggling to understand the material; or they’re having problems with a supervisor, with a co-worker, in the environment that they spend a great deal of their life in – and they’re given all kinds of possible suggestions: why don’t you talk to your Professor, your Academic Advisor, the Dean; why don’t you sit down with your boss, your supervisor, your co-workers – “Who cares?  No one cares… nothing’s going to change…”
– Most of us have heard and read and been shocked, angered, scandalized, infuriated, depressed or whatever other words you want to describe – the stories surrounding the alleged sexual abuse done by Archbishop McCarrick, the former Archbishop of Newark; the stories of cover ups… and sadly, I’ve heard from more and more people just disheartened, discouraged, disbelieving in anything of good in the Church anymore.  I don’t claim to have an answer to those understandable feelings.  The layers upon layers of violations of trust has shook the faith of some of the most devout – where one person in an email said they’ve stopped going to Mass anymore because they ask themselves “What good will that do? What’s the point?  What’s the use?”
I know I’ve been on the receiving end of these types of sentiments before when faced with a trial or overwhelmed with a situation.  I know I’ve felt some of these things or even given into those discouraging thought patters at times myself.  It can be incredibly debilitating.   Whether just short term where someone feels they are suffering alone and no one cares – or even worse in the long term where this mode of thinking becomes something that a person takes deeply to heart and believes them with a certitude they reserve towards the sun rising, taxes having to be paid and ultimately one’s demise being certain.  Some seem more certain about their demise than the sun rising.  All of us on some level I think can resonate with those attitudes or have had some type of experience with these pessimistic feelings. Which is what came to mind reflecting on this Gospel story.
Oftentimes we simply read the headlines for these events from Jesus’ ministry and don’t get into the nitty gritty of it.  So we can start to hear the story think “Oh this is the one on the multiplication of the loaves and fishes” and kind of zone out from the details.  But it’s there, in the details, that we often find a lot more depth, a lot more truth. 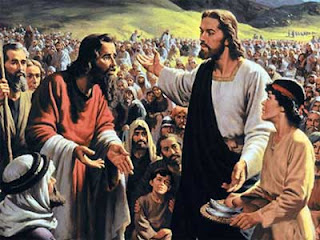 Lets think about the scene again:  Here is this large crowd coming to Jesus.  Why – because they had already heard and seen and experienced Jesus healing the sick (that was the first line “a large crowd followed him, because they saw the signs he was performing on the sick.”) As word spread of people being cured of these diseases and restored to health – that not only were their physical ailments relieved; but the personal psychological and mental anguish those illnesses caused had been healed as well – that has caused this massive buzz to see Jesus.  But with this buzz, with this crowd, there’s a problem – the people were hungry.  Jesus looks to his closest guys – his apostles asking what do you think we should do?

Philip – poor St. Philip, imagine as an apostle, this is one of the few times you enter into the Gospel narrative and what was his response recorded for all eternity in scriptures?  Words of dismissal:   – 200 days wages worth of food would not be enough for them to have a little.   St. Andrew isn’t much better as he points out- “this kid has 5 loaves and two fish” and just as quickly squashes that by saying “but what good are these for so many?”
Why bother?
What good will this do?
What’s the use?
In one sense, I’m relieved knowing that these, two of the 12, two of the closest – who had a front row seat on everything that Jesus was doing – even they forgot, even they doubted, even they gave into pessimism from time to time.
Jesus is undeterred by this.   And He will use even the tiniest of openings, the smallest of cracks on those shells of cynicism around our hearts and souls to amaze us.  Think back to what he said in another parable “if you had faith the size of a mustard seed, you’d say to this mountain move from here to there and it would… nothing would be impossible for you.”  In this Gospel passage, He illustrates this.  He takes this nameless, generous boy (I’m assuming he was generous and that Andrew didn’t just grab the food from the kid) and this seemingly small, selfless act is able to feed thousands.
We can’t let the wow factor of the miracle to blind us to the details though.  First off to recognize that Philip and Andrew failed Jesus here.  Granted not as horrendously as more current examples, but for me, I need that reminder that even when those closest to Jesus (or those we think should be closest to Jesus) fail, or scandalize, or betray Him and the people Jesus’ loves that doesn’t stop Jesus from doing what He wants to do…
That doesn’t stop Him from caring for us.
That doesn’t stop Him from ministering to us.
That doesn’t stop His deepest desire to attend to our deepest hungers.
Yes, Jesus is able to accomplish even greater things when the apostles and their successors are faithful, are selfless, and lay down their lives for Jesus and His flock – and it is good to remember that we have thousands of years of examples of that – including Philip and Andrew – who ultimately were crucified for preaching the Gospel of Jesus.
But as he shows here, even when any of his chosen find catastrophic ways to let him down, nothing will stop Jesus from his mission.  If they can’t do it, and He has to rely on a kid with 5 loaves and 2 fish, then so be it. 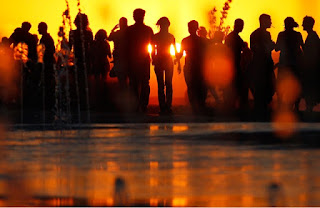 Which is the other even more important point for all of us today – a truth that we have to really fight hard to protect and maintain – and that is the precious gift of faith.  There’s an avalanche of reasons to give into despair, to doubt, to give up.  Yet, not just in this gospel story, but deep within each of our stories as well – in the details, sometimes forgotten after we’ve made up our own headlines – we can find instances of selfless, sacrificial love that helped bring healing to some tragedy we were facing; we can recall others who laid down their lives to care for us in a moment of trial; we can remember how the gift of forgiveness was able to transform a relationship.  It’s important for us to let those memories be a source of constant renewal – constant reminder of how the Lord is active, is attentive, is victorious even in the face of things that leave us shaken and if not worse.

Its with that history that we can see that whatever it is that we’re confronted with – that is unnerving, depressing, distressing us – and take up the challenge to look for whatever loaves, fish, mustard seed of faith that we still have, and make St. Andrew’s words to Jesus’- our words…  as we ask Him  “what good are these?”  Then in patient hope, wait to see what it is that Jesus will be able to do with the simple, but sincere offerings we make.