Latest News
Home /Blog/WHEN THE SHEPHERD(S) FAIL
Hi everyone, this is my homily for the 16th SUNDAY IN ORDINARY TIME.  The readings for today’s Mass can be found at http://usccb.org/bible/readings/072218.cfmhttp://usccb.org/bible/readings/072218.cfm
I had worked on this homily mostly before even further stories of sexual abuse and scandal regarding Cardinal McCarrick, (the former Archbishop of Newark) hit Friday and Saturday morning.  In one sense, I’m glad that I didn’t see all of that before I finished my first draft because after reading them, words escape me.  This was already a disgusting chapter of Church history that was hard to even imagine as I shared a few weeks ago:
http://homilyonthespot.com/?p=17  and that I preached about the following Sunday – http://homilyonthespot.com/?p=16   The last thing I want to do is to address this any more – nor imagine that the stories would get even worse, which they have.  It’s just devastating.  But I don’t feel like I have that option – to not talk about it.   I’m still trying to process the many feelings and emotions I have over this horrific scandal – and trying to pray through it as well.  And I trust that our Archbishop, Cardinal Tobin, is doing so as well as he leads and guides this local Church through this difficult time.   Thanks as always for reading; sharing this blog on your social media sites; and your feedback and comments.  I appreciate it – Fr Jim 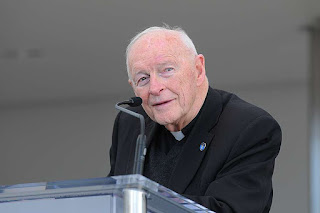 It’s hard reading these scriptures today and not have our thoughts and minds go to the examples of failures that we know all too well.  Whether it’s the latest news updates regarding the scandals surrounding Cardinal McCarrick – or even things from our own experiences, where we know a priest who didn’t do something criminally scandalous, but did something awful that effected the faith, the belief of someone else.  I know both sets of examples popped in my mind when I just opened to the first reading and read the words of the Prophet Jeremiah saying “Woe to the shepherds who mislead and scatter the flock of my pasture says the Lord.”  (When a prophet says “woe” – that’s never good…) And then he goes on, saying ‘you have scatted my sheep… driven them away… you have not cared for them…”

You can hear God’s anger through those words of the prophet.

You can hear Jesus’ broken-heartedness in the Gospel as he sees the “shepherdless.”

What is striking to me in both, is God’s deep, deep love, for the flock – for his people… for all of us.

Because this really does get to the heart of God.  We just heard one of the most beloved of images that comes through scripture when we sang the psalm, where we rightly proclaimed “the Lord is my Shepherd.”  In the New Testament Jesus goes even further.  In Him, God being Man, reveals himself to be “the Good Shepherd.”   It’s one of the most revered and popular concepts we have of God.  That title has inspired works of art.  Musical pieces, poems were born of fascination with this concept:  the Good Shepherd – the one who goes after “the lost” sheep.  Yes, the Good, but somewhat reckless one who leaves the 99 in search of the one…  Which on a business level, doesn’t make any sense – 99 out of 100 is still good in the loss to safe and secure ratio…  But the Good Shepherd isn’t interested in such ratios or good business sense.

The Good Shepherd cares, he has compassion for the sheep left in his charge.  He’s not thinking “that stupid sheep, why’d he get lost.”  He’s thinking – my sheep is lost – he must be scared, he must be frightened, he might be hurt or harmed or in need.  That’s what makes a Good Shepherd good…   So when Jesus calls himself The Good Shepherd – in light of his life and death on the Cross, and in the confirmation of the resurrection – we know it to be true.  We know Jesus says what he means and means what he says.  He is indeed The Good Shepherd.

Where it gets challenging for us is that we’re 2,000 years removed from Jesus first uttering those words about himself – and from when he first entrusted that responsibility to others.  When Jesus at that Last Supper instituted the Priesthood and shared it with the 12… When He at the Ascension commissioned them to go out and share His good news, His Gospel to the ends of the earth – He wasn’t asking them to be functionaries who simply repeated his actions to feed the M/masses (literally and figuratively) He wasn’t looking for them to simply impart information to the ends of the earth.   He intended them to be shepherds of the massively growing flock.  He expected them – He expects them to be Good Shepherds willing to lay down their lives for the sheep.  And that’s why we hear God taking those failures, the failures on the part of the shepherds so personally in scripture.  That’s why I believe He still does.

One thought that bothered me in the past and keeps bothering me now is how these terrible things happen in the Church?  I know we’re all human – we’re all prone to sinfulness and failures.  But that aside –  after the spectacular failures we’ve seen in the past; the massive media coverage and reforms made in light of them; how is it possible that we’d have these things still happening?  One thought that came to my mind is that some in the Church weren’t trying to be “Good Shepherds” – they were trying to be “Perfect Shepherds.”  What do I mean by that?  They didn’t want to believe anything bad could happen in the Church.  When stories were coming to the surface of very bad things happening, they didn’t want to believe them.  When presented with overwhelming evidence that there were bad things happening, they’re motivation became to protect the Church (by trying to hide these bad things) and justified it by pointing out all the authentically good things that the Church does.  They wanted to keep this facade of strength; of being the epitome of goodness and love – tragically acting in ways that were incredibly weak, evil and fearful.

The only thing that these “perfectionist Shepherds” achieved was setting up a a perfect failure, because not only was all of that sinful, unethical, it’s not even remotely Christian at its core because, again, Jesus calls the shepherds to be “good” not “perfect.”  If we were perfect, we wouldn’t need Him.    And when people in the Church lost focus that yes they were called to be Good Shepherds, but that they were not the Shepherd, the perfectly Good Shepherd – and that they needed Him, they had pushed Jesus out of the center, became the centers themselves and we see how well that all went.

I’m sharing this because it’s a good reminder that we have to be careful not to let that happen to us.  I know how easy that can be for me as a priest as well…  The minute it’s “my ministry” instead of it being  His ministry that I’ve been entrusted with – and that is a sacred trust that I will be held accountable for – I have to realize I’m in danger of being sherpherdless… of falling for the lie of seeking perfection myself instead of goodness that comes from following Chirst.

And that’s something I think the Lord wants all of us to recognize as well…  how easy we can fall into that same trap:  Parents, out of a desire to protect their kids and not want their kids to stress out end up trying to present everything as being okay; there’s no problems and if there are problems Mom or Dad will fix them.  Married couples when the husband or wife stop sharing with each other their failures, their fears and constantly because they want to be “strong” for the other.  Kids who end up fixating on a sport, a class, a thing that they don’t recognize they have started to obsess on success, on fame, on popularity.  These pursuits of perfection can creep in on all of us, whatever our state of life.  And when they do, we have in a sense found a new shepherd for ourselves to follow: our own egos, our own pride, our own lies…

In Jesus Christ, God has raised up for us the “Good Shepherd.”  He has called us – all of us, lay people, religious, clergy – to follow Him.  It is only in doing that, following Him, that we will ever find healing for the many wounds we find both inside the walls of the Church and even more to a broken, needing world desperately looking for the Hope that Christ has lavishly shared.  It is only in following Him that we can experience the priceless treasures of compassion and reconciliation that everyone of us as sinful human beings longs for.  It is only in following Him, that the shepherdless have a voice to negotiate the rough, dangerous journey of this life into the place of peace and fulfillment that He has promised us.

Now, more than ever, may we beg the Lord to help us clear away all of the hurdles of fear, the obstacles of self-centeredness, and to attune our hearts and souls to His voice, leading us to live lives centered in what is right and just.