Hi everyone, here’s my homily for June 17,  2018 – 11th Sunday in Ordinary Time. The readings for today can be found at http://usccb.org/bible/readings/061718.cfm. Thanks as always for reading, sharing this blog on facebook, twitter and reddit – and for your comments and feedback. Have a great week – God Bless, Fr Jim 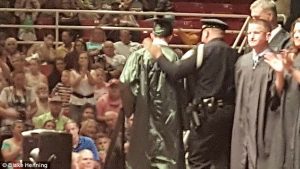 A couple of years ago, a police officer in Texas was given the horrific task of having to break the news to an 18 year old that his parents had been killed in a traffic accident when a drunk driver crashed into them.  Kazz Portie, the youngest of 5 children was at home by himself when Lt. Eric Ellison delivered the devastating news.  Ellison admitted that telling the young man that he had just lost both of his parents in such a horrific way was one of the hardest things he’s had to do in his 21 years as a Police officer.
In his overwhelming grief, Kazz spontaneously shared that he had a week to go until he graduated from High School – now with his parents gone, he didn’t know what to do.  The officer said to him “You’re going to walk!  Your Mom and Dad will have a front-row seat from heaven, and I’ll stand in their place.  I’ve got your back.”
When Kazzie’s day to walk the stage at his graduation came, Lt. Ellison was there to cheer him on.  “I walked up on the stage he looked at me and I looked at him and we both cried …” Lt. Ellison recounted, reflecting on the emotional moment that soon went viral.  He wrote about the outpouring of support the story generated on his facebook page: “I am HUMBLED for the positive comments I’ve received about being there for Kazzie. I just want everybody to remember that through this tragedy, this was ALL about Kazzie and his day to shine. I just did what I would want someone to do if I had left my girls early.” 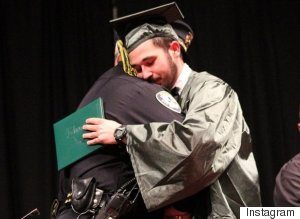 For his part, Kazz shared his gratitude for this small, but meaningful gesture:  “Seeing Officer Ellison there to congratulate me meant the world to me. It was so nice to see that he actually showed a genuine care for me and my family’s situation instead of us just being another ‘case.’ “
On the surface of things, it really was a small gesture.  Had the police officer simply delivered the terrible news, waited with the young man until some friends or family members arrived and then returned to patrol, no one would’ve given it a second thought.  Yet something in the man’s heart and soul moved him to offer this small gesture at a moment of inconsolable grief.  In some small way this cop who was a stranger to this young man and his family before his official duties forced him to share a terrible part of their lives wanted him to know he was loved and cared for.
We so often imagine our call to be Jesus’ disciples in extremes – we beat ourselves up when we fail, when we sin and feel like we’ve made a complete mess of things…or we think that holiness, being his faithful disciple is only evident in doing massively important things – like being a missionary, being another Mother Teresa – and so it remains something few of us can achieve.
But what Jesus challenges us with in this parable is to embrace the faith of the planter – whether of seeds or ideas, acts as we go about life in the ordinary – day to day routine of things.  Because what we find is that there are countless opportunities to plant whatever small seed we can and 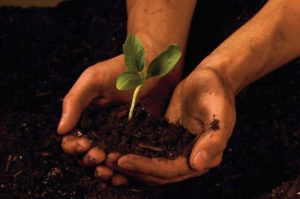 nurturing that seed into something good, something life giving, something that will glorify God – not ever knowing how that might transform someone else’s life .
Nurturing what we have sown might be incredibly frustrating and demanding.  But mustard seed faith is centered in the conviction that, in the smallest acts of compassion and generosity, we can transform the most barren stretches of our lives into great gardens of hope.  Just as Lt. Ellison did in deciding to go above and beyond his duty, his responsibility by standing in Kaz’s parents place at his graduation – making a time of unimaginable grief and pain even slightly better.
In embracing Christ’s call to hold the faith of the Gospel farmer and the hope of the mustard seed: you and I engage in the ordinary but essential task of being willing to plant seeds of kindness, of joy wherever and whenever we can in the certain knowledge that these small gestures will, in some way, result in the abundant harvest of God’s life and love.