Latest News
Home /Blog/IN AN ERA OF FAKE NEWS, SOMETHING REAL & GREAT
Hi everyone, here’s my homily for THE SOLEMNITY OF THE MOST HOLY BODY AND BLOOD OF JESUS CHRIST – JUNE 3, 2018 the readings for today’s Mass can be found at: http://www.usccb.org/bible/readings/060318.cfm.  Thanks as always for reading, your feedback and comments and for sharing it on Facebook, Twitter, and Reddit.   God Bless you and have a great week – Fr Jim 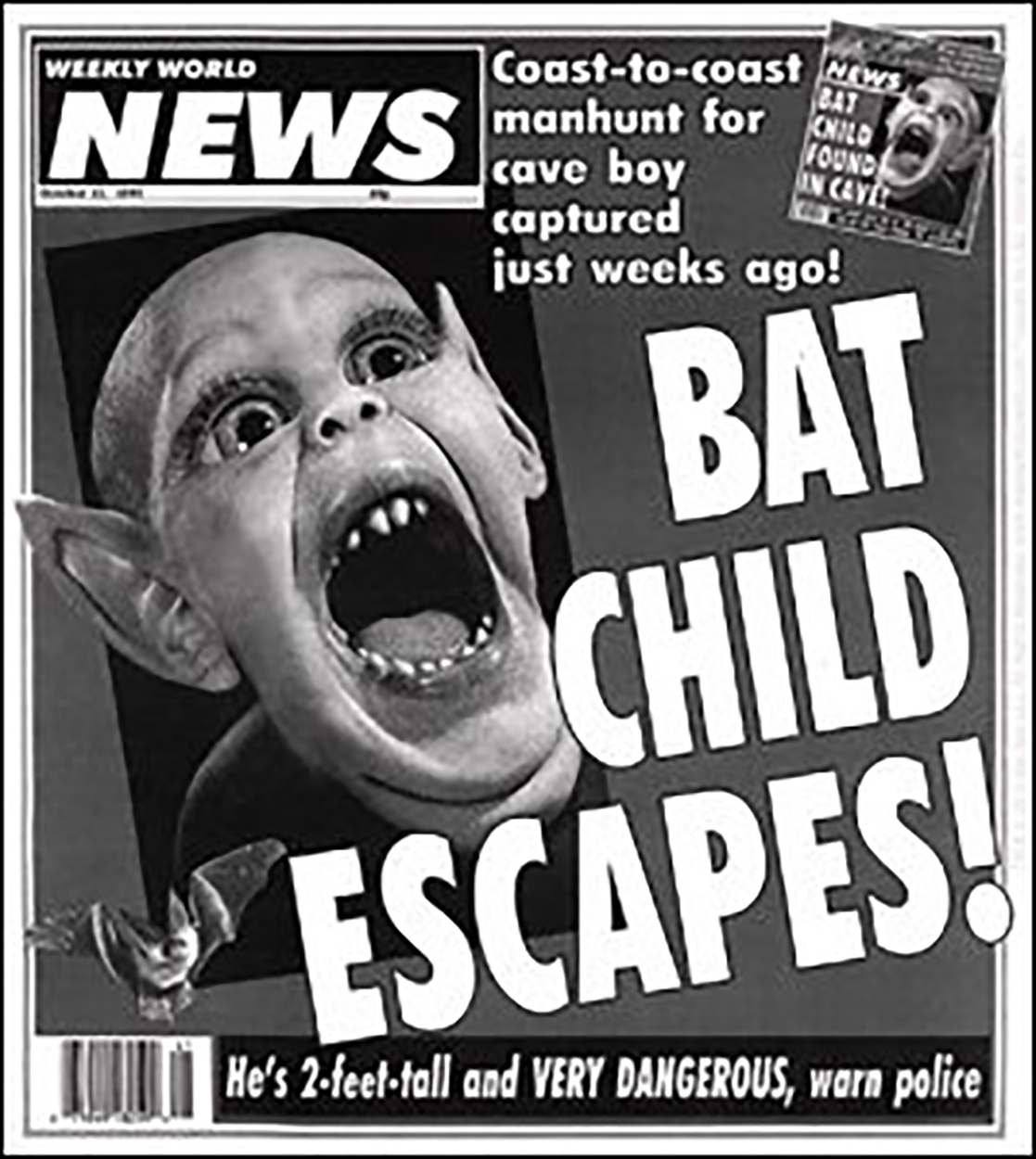 HOMILY:
“Fake News” – how often have you come across it?  Been duped by it?  Maybe it was that friend of yours who had posted an article on their facebook page that you liked and shared; or it was that email from your Uncle of a story that had in big bold (and all capital letters) THIS IS 100% TRUE – EMAIL IT TO ALL YOUR FRIENDS.

I can remember this happening a few times to me…  falling for a fake news story.  This one time a few years ago, a friend who works in the media (so I assumed was really on on top of things) shared a story about a new App for an iphone  called “Livr.” “Livr” was this new social network for drunk people.  They reported that it had a breathalyzer-type device that could connect with your phone that would help you locate similarly buzzed/drunk people in your location.  The story had had all kinds of promo videos and reports about it.  I remembered how when I first saw this, I got indignant, and replied to the story saying that this could be one of the stupidest, most reckless things to come along… encouraging really bad behavior.  Especially when I thought about the college students who I work with, who sometimes believe nothing bad will ever happen to them – something like this App could encourage them to take even more horrific risks…  Well the whole thing turned out to be a stupid hoax.  The so called “inventors” at a “wrap party” for the launch of the app said “ Thanks for the memories… It’s been real… but also, you know, fake.” (Interesting, I found that if you google it, you can still find this presented as a legitimate thing on a news site even with a notation that the story had been “updated” – http://www.dailymail.co.uk/sciencetech/article-2575643/The-party-app-opens-youre-DRUNK-Blackout-button-wipe-evidence-alcohol-fuelled-behaviour-phone.html )
Sadly, we’ve seen this kind of thing take hold of major media outlets.  To the point that trust in news organizations, belief in their reporting has plummeted in recent years….  All at the very time that the speed, immediacy and numbers and ways for information to be distributed from one end of the globe to the other is somewhat unprecedented.   Think about it- someone can witness some major event and “break the news” with a tweet or a text message before any reporter even knows that there’s a story to be told.  Which is part of what fuels the “fake news” problem.   People can distort pictures, edit videos and really mislead people and cause massive rushes to judgment.  Last week there was a story that went “viral” about this cop who seemed to punch this woman on the beach for no just cause whatsoever.  Seemed completely unprovoked.  Now reports are saying that she actually assaulted the officer and that the rest of the fight was not seen or reported.  (But then again, I don’t know if that report was true or not)
What do we believe?
What is true?
Who do we trust in an era where reports and stories that turn out to be “fake news” seems more common than the rare exception?
What is real? 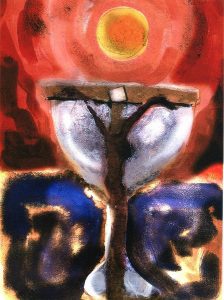 That’s an even greater question when it comes to matters of Faith… What we believe.  And we probably couldn’t find a more difficult or divisive issue for all Christians than what we celebrate in today’s Solemnity of the Most Holy Body and Blood of Christ.  Well to be even more precise – that’s something we celebrate every time we come to Mass… That’s something we encounter every time we enter the Church and see that candle burning in front of that tabernacle…  That the bread, the wine at Mass becomes Jesus’ real Body and real Blood.  That Jesus is as real and present to us in the Eucharist as he was walking along the Sea of Galilee, or when he first uttered the Beatitudes to His first listeners.  This is real News and it’s profoundly great news that the Catholic Church has consistently proclaimed and that all Christians believed until the Protestant Reformation over 500 years ago.  That’s not to attack our separated brothers and sisters in Christ though.

Because truth be told, polls show that many Catholics themselves state that they don’t believe that Jesus is really present in the Eucharist.  Or perhaps, (because polls can only get a snap shot, they’re not designed to delve deeper and get a better sense of things) perhaps some Catholics haven’t really learned this truth of our faith… or, maybe, just maybe, the problems, the difficulties of life;    the scandals, the abuses, the failures of some in the Church – all just eat away at our belief, discourage us to the point where our doubts seem more reasonable and leave us wonder if this too could be Fake News.
Which is why this feast is so important… and why these scriptures are so important.  They cause us to pause and reflect on where all of this comes from.   In the Gospel, we hear Jesus and his disciples are gathering together for the Passover.  Passover is one of the foundational Jewish celebrations recalling how 3,000 years ago, God had saved his Chosen People, the Jews from the brutal, horrible, unjust treatment they were suffering as they were slaves of the Egyptians.  After Pharaoh had ignored 9 horrible and miraculous plagues that had fallen on Egypt and Moses had kept warning him to let the Jews go free – the last plague brought death to every Egyptian first born male.  The Jews were instructed to sacrifice a lamb and mark there doors with the lambs blood, and the angel of death would “pass over” their houses on this monumental and historic night.   The blood of the lamb had signaled God’s favor.  God would physically save his people and through Moses lead them out of Egypt towards the promised land.  And to this day, the Jewish people still celebrate the Passover meal recalling God’s protection and guidance saving them from slavery. 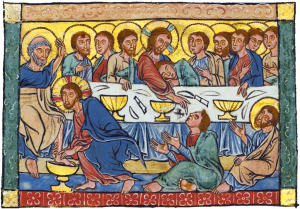 2,000 years ago, Jesus makes that celebration of the Passover seder as the night where he institutes the Priesthood and the Eucharist at his Last Supper before His Passion and Crucifixion.  He offers us the greatest and most definitive proof that He means all that He says, as we heard in the reading today from the Letter to the Hebrews “Christ came as high priest…with His own blood.” –

Jesus will become the new lamb.
Jesus’ blood will save us from the death that would be the result of the slavery we still suffer from, the slavery to sin.
The reason we can believe this Real News this Great news – is that God has proved to us for thousands upon thousands of years a history of goodness, of saving His people.  With Jesus being raised from the dead – where His apostles, disciples, encountered and embraced Him, experienced Him in His glorious resurrected body and received the outpouring of the Holy Spirit in Pentecost, we’re connected to all of those events.
Even more than just connected… the Last Supper; Good Friday; Easter Sunday – they are all made real, all made present on this Altar.  God uses the most imperfect and sinful people – His priests; God uses the most simple, humble and common of elements – bread and wine to enter into our broken, sinful world… so he can save us from slavery.  Slavery from the world filled with false idols that offer us pleasures that are fleeting; Slavery from the world of fake promises that don’t stand the test of any trial…
Jesus enters into all of this here and now, and is more than just being a comforting presence.  He wants you and I to consume His very self.   As we do, our vision is to be transformed to begin to see His presence in all things… to see how we are always – even in the midst of the worst trials and most painful circumstances, we are always under his loving, wise care.  To allow our vision to be transformed where we see Him and we serve Him in those who are poor, who are suffering, who are in need.  To see how as we eat His body and drink His blood, He is transforming our innermost, deepest selves from all that is false, all that is fake and making us the real children of God He created and intended us to be.