Latest News
Home /Blog/CHOSEN
Hi everyone, here’s my homily for the SIXTH SUNDAY OF EASTER – MAY 6, 2018 the readings for today’s Mass can be found at: http://www.usccb.org/bible/readings/050618.cfm.  Thanks as always for reading, your feedback and comments and for sharing it on Facebook, Twitter, and Reddit.   God Bless you and have a great week – Fr Jim 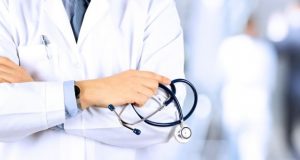 HOMILY:
This week, a new study had attracted a lot of attention, for good reason, as the headline read: “America’s next big public health issue.”  After recent concerns over widespread flu outbreaks; recurring stories over obesity crisis; or follow up stories on research into diseases like cancer, diabetes or heart issues, you had to wonder which of these would be the next big concern.  But surprisingly it wasn’t any of them… this next big public health issue  is loneliness.  The study’s authors reflected in sharing their results:  “The biggest takeaway is that most Americans are considered lonely” which is “an alarming statistic.”  The survey found people agreeing with statements like “There is no one I can turn to” at an unprecedented rate which suggests that loneliness is reaching “epidemic levels” here in the United States.
I doubt that’s simply an American issue, evidenced just reading the New York Post on Friday.   They reported that a few months ago, an elderly Chinese man was so lonely that he put himself up for adoption.    He created a flyer that said “Lonely old man in his 80’s – strong bodied.  Can shop, cook and take care of himself. No chronic illness.  Retried from a research institute with a monthly pension of about $950 a month.  Hope that a kind-hearted person or family will adopt me, nourish me through old age and bury me when I’m dead.”  The newspaper reported that he was widowed, estranged from his sons, and that after first publishing his flyers in December of 2017, had sadly passed away in March, without finding anyone to adopt him.  Although he had made some friends through this adoption-request, he had grown more bitter and angry over the months when people would call him to discuss it -eventually  ranting about the Chinese government and the food that was available at the local cafeteria.
Something hit me reading these stories….  I remembered a recent poll  that found while a majority of people still believe in God, a sizeable number (over 30%) of those who do believe in God, say that they don’t believe that’s the God of the bible, but rather a higher power or supernatural force.  Interestingly, this same survey found of those categorized as to following no religion, 72 % of this group also don’t believe in the God of the bible, but believe in some supernatural, higher power.  While I’m sure that statisticians might argue with me about drawing conclusions, it’s hard not to see some correlation that there’s been this growth in loneliness at the same time as there’s been a collapse of belief in what they called “the God of the Bible”, or perhaps, more precisely a lack of relationship with Him… since you can’t relate with a Higher power. 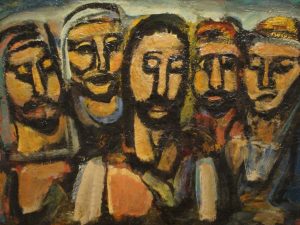 That’s some sobering and honestly, disappointing news.  Particularly when we think about this Gospel passage we just heard tonight.  It is a continuation of the Gospel from last week where Jesus was speaking to his disciples in the Upper Room on that first Holy Thursday at the Last Supper.   Remember, Jesus had already washed the disciples’ feet – called out Judas and seen him leave to betray Him.  He was alone with the disciples  and His thoughts about what was about to unfold:  His arrest, his unjust trial, brutal torture and crucifixion.    Rather than giving into what would be understandable anxiety, or fear, or distress, Jesus speaks to his disciples in a very new, specific and intimate way… Despite the fact that He knows how these guys will be utter failures, denying and abandoning Him in his hour of torment; how fear will grasp their hearts and anxiety will rule their minds to the point that they will forget all that He had said and done in the horrors of Good Friday – despite all of that, Jesus Christ, fully human, fully divine says to his handpicked apostles in this passage some very key, beautiful  things:
I chose you…
to be my friend…
love one another as I have loved you.

Imagine that scene:  Jesus knows these are his final words before His death and what that will do to them.  He wants them to not give into doubt or despair, or let feelings of loneliness to cause them to forget that He sought them out… He called them, and chose them…  That this relationship was of divine friendship… rooted in absolute, total, selfless love.  That’s an amazing story.  We can hear and feel the dramatic tension of it all.
But we don’t look at the Gospels as a history book or dramatic story – but it is the living word of God.  The Gospel is still active, still effective…  That is very true on a personal level for me:  Over the last few weeks, one beautiful thing that our Campus Minister Sean had started was what was called an “Emmaus Group” where people in our Newman Catholic community were invited to randomly be paired up with someone else and to get together for 30-60 minutes and just talk to each other and get to know someone a bit differently than they knew before..  In the 4 meetings with students I was fortunate to be paired up with to meet up and talk with – one of the things that came up several times was their asking me “When” or “why did you decide to become a priest?”  That’s a pretty loaded question to be honest.  Depending upon the conversation – different aspects of my story would come to mind – from as far back as Kindergarten, to throughout Grammar School, High School, college…  But when I came upon today’s Gospel, this passage was another important chapter of my story.
It was one night my junior year in High School when I was looking through college view books and guides – and honestly I was really getting nervous about even the thought of priesthood.  In one of the seminary brochures that I had tucked deep inside the pile of booklets from a whole bunch of other schools was this very Gospel passage.  Even though I had heard it before, that evening felt like I was reading it for the first time.  I can clearly remember those words and phrases from the passage jumping up where I felt Jesus was saying to me in a very new, specific, intimate way: It was not you who chose me, but I who chose you… [to be] my friend… if you keep my commandments… to love one another as I love you.  Discerning priesthood can be a very intimidating thing – particularly at that stage of your life.  There’s not a lot of close friends that you can share these types of thoughts with (it kind of kills any relationships with women at that point by the way – Hey I’m thinking of being a priest… want to catch a movie…) Family members can be understandably anxious and concerned.  And some priests can get a bit too excited that they could start pressuring you in unhealthy, unhelpful ways.  So in short, I felt that doubt, that fear, that loneliness at a very impressionable time. 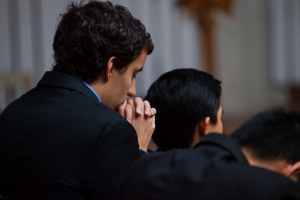 But those prayers (or cries?) of mine were answered in a real way that evening as I read those words – It was not you who chose me, but I who chose you… [to be] my friend… if you keep my commandments… to love one another as I love you.  All of a sudden the reality that priesthood wasn’t something I was pursuing like a career or something to aspire to, but an invitation that maybe, I was chosen for, by Jesus who reveals himself as a friend and wanted me to be His friend – and told me in a way that was both simple and complicated – that meant loving as He did (meaning it would cost me my entire life) made sense.  The loneliness, the fear, and the anxiety started to recede and I felt my confidence in my discernment grow from that day forward.

So I’ve shared how this Gospel was the apostles story, and how it was my story.  But what about you?  How many here tonight can relate to some of those statistics of people who feel lonely?  Who – even though you find yourself here and may have heard things and learned things about Jesus (maybe even after many years) –  in your heart or mind you’ve only felt or seen God as some higher power – this inexplicable, distant force.
If that’s you, that’s not something to be embarrassed or ashamed of or in any way like you’ve done something wrong.  If anything, God is overjoyed to an even greater extent that you’re here than that I am, because He knows how much harder that has got to be for you.  You’re coming here despite that loneliness… You’re coming here despite the fact that perhaps you don’t feel that intimacy, that closeness that every human heart desperately longs for. 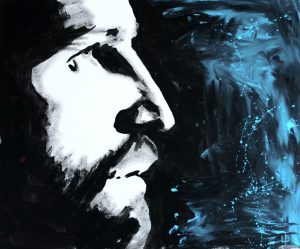 The Good News we celebrate here is that:  God has a face, and a name.  In Jesus Christ, God has become human, so that we don’t have to get lost in mystery; so that we don’t believe lies like we don’t matter, that we’re simply specks of dust in the universe…  So that we don’t allow our feelings to deceive us into believing we are all alone.  Right here and now, this Gospel is proclaimed anew… The word of God is alive and active.  Jesus looks out in this room at His disciples.  And tonight, Jesus says It was not you who chose me, but I who chose you.   Jesus has chosen each and everyone of us – to be His friends – which we are when we keep His commandment: love one another as I love you.

Perhaps one way to combat the loneliness epidemic starts right here and now…  By each of us allowing these words to penetrate our hearts anew.   It’s like when we were little kids and had to keep learning the same lessons over and over again (how many times did we have to write out our ABC’s? Or go through a times table) – we needed to drill over the fundamentals till they became instinctively known, and understood (and go for refreshers when necessary).  This Gospel is repetitive, not to drill something into our heads  — but our hearts:   how the King of the Universe  chose each of us in Baptism to be His friends…   That He has not simply loved us (past tense) in creating this universe, in the many storied and celebrated ways we find throughout scripture, and most definitively on the Cross that first Good Friday – but that He loves us (present tense) in even more countless, personal, ways that are as unique and personal as each of us are – but in one particular way that we share together as we receive His Body and Blood in the Eucharist.
As we consider that anew, as we allow Jesus to abide within us, and see that His friendship is meant to touch every aspect of our lives, then we start to take what we’ve received and share it in this mission that we’ve all been entrusted with: to share His love, especially with those most in need, those most lonely in the world around us.