Hi everyone, here’s my homily for the FOURTH SUNDAY OF EASTER – APRIL 22, 2018 the readings for today’s Mass can be found at: http://www.usccb.org/bible/readings/042218.cfm.  Thanks as always for reading, your feedback and comments and for sharing it on Facebook, Twitter, and Reddit.   God Bless you and have a great week – Fr Jim 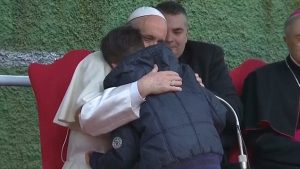 HOMILY:
A few days ago, this video popped up on my Facebook feed of Pope Francis hugging this little boy who was crying.  The little guy, couldn’t have been more than 5 years old – was at an event where the Pope was taking questions from kids.  As the boy named Emmanuel approached the microphone, he first appeared to be nervous and the Holy Father tried to encourage him to speak…  But as he stood there he got more anxious and it seemed like he had stage fright, as another priest appeared to try to calm his nerves.  At that point he just broke down and started to cry, so the Pope motioned to him to come up to him and just to whisper in his ear what it was he wanted to ask.    And you got to witness the Pope hugging the little boy as he was whispering in the Pope’s ear for a few minutes what was making him so upset and the Pope talking back to him.
When little Emmanuel went back to his seat, the Pope explained “Emmanuel told me that a short time ago, his father died.  He was an atheist, but he had all four of his children baptized.  He was a good man.  Little Emmanuel had this doubt that his Father not being a believer could not go to heaven.”  Francis explained: “It is God who decides who goes to heaven.  But how is God’s heart in front of a father like that? What do you think?  It’s a Dad’s heart.  God has a dad’s heart.  And in front of a dad who, even if not a believer has been able to baptize his children, and pass on to them his goodness, do you think that God could leave him far from Him?  Do you think this?” At this point, he looked out at the audience waiting for an answer and could hear a few people saying “No” so he continued – “Say it Loudly with courage!” And they answered “No” – and the Pope asked ‘Does God abandon His children?  Does God abandon His children if they are good?  And again they answered “No…”   With that, he turned back to Emmanuel and said “Here Emmanuel… this is the answer.  Surely God, was proud of your father, because it is easier to baptize children when you believe in God then when you don’t believe in God.  And God loved this for sure. Speak to your Dad… pray for your dad…”
I had posted the video and the vast majority of people found it as moving and inspirational as I did.  But a friend of mind texted me soon after and said “I saw that you posted the same video that someone else that I know did, who had a slightly different take on this”   and then there was a screen shot of this guys post that said: ‘I am not a Catholic but now its Catholic doctrine that atheists get into heaven?  Do I need to refer anybody to the section in the New Testament of the judgment of non believers?  Who the heck have you guys put at the head of your church?  You need a better selection process, and a better removal process.  This sort of doctrine is very literally anti-Christ in the truest sense…” 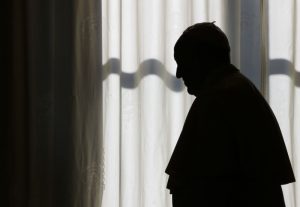 There’s a knee jerk reaction from some people that every time the Pope speaks they are prepared to think that he’s causing a major theological crisis; or that the Pope is undermining Church teaching… There’s also have a greater number of people who have less understanding of Christianity and Catholicism – some sadly in the media – that don’t realize how crazy they sound when they try to share things (for example on Good Friday seeing headlines that were circulating “Pope says there is no Hell” – which is the epitome of Fake News) It’s sadly not surprising that this encounter could be spun in any other way than what should be simple and obvious.
Rather than play into this chaos-narrative that’s being created where we debate what was said, what was meant and the reasons for this confusion, quite simply –  what the Pope was saying to little Emmanuel in a gentle, father like way that this little guy could understand is basically what we just heard in today’s Gospel:  Jesus saying:  I am the Good Shepherd, and I know mine and mine know me, just as the Father knows me, and I know the Father; and I will lay down my life for the sheep.

Jesus, the Good Shepherd has revealed we have a very loving, merciful Father… A father who can sees into the heart (that’s why He says “I know mine”) And loves everyone of us – even an atheist.  He desperately wants each of us to come to know and love Him so that we can spend all eternity with Him… so much so that the Father sends what is most precious to Him – His son Jesus, to lay down His life for us, to gather us all together.
Yes, He has given us this Church, this rich treasure that is our Faith so that we can know and love and experience and encounter him in the here and now.   A place where we can bring our doubts and fears and be relieved and consoled.  A place where we can bring our sinfulness and brokenness and be forgiven and healed.  A place where we can bring our weariness and burdens and receive the Jesus body and blood as the nourishment we need to get up and continue on.  That’s the gift of the Church and our faith that we should be grateful for.
But just because so many people don’t take advantage of that rich treasure… Just because so many might be turned away from the Church, from the Faith for some reason… (some sadly for understandable reasons when you hear their stories of how they were hurt by people in the Church) that doesn’t mean the Heavenly Father decides to return in kind.  Like “You stop worshiping me, then I’ll stop loving you.”  That’s a petty, human response.

I know mine…  He knows that “atheist” father’s heart – He knows the hurts, the doubts, the pains that contributed to his stated lack of belief – yet somehow the man had this openness, perhaps even hope that MAYBE there was a God, and if there was, he wanted to make sure His children could possibly have a relationship with him that for some reason he felt was impossible for him.
I know mine – He knows everyone of us.  This is the good news of great joy that we celebrate today, and everyday.  And that good news is meant to change us.  Not to become lazy about our obligations.  Not to be looking for loopholes (well if the Pope is saying an atheist can go to heaven then why do I have to go to Mass every Sunday? what kind of logic is that?) We’re not to be comparing ourselves to others, or judging others, or becoming the older brother in one of Jesus’ most well known parables, the Prodigal Son -who gets ticked off that the younger brother receives love and mercy after squandering his Father’s inheritance, while the other brother remained faithful and obedient… the point is that the Father loves all of His Children.
I know mine  … and mine know me.     Those of us blessed to be here are meant to be changed by this relationship.  We’re supposed to be taking this gift to learn how better to hear the Good Shepherd’s voice in the craziness of the world around us.  And we know that’s one way is by our being here for Mass where we come together as a community; we feast on His word and His body and blood.  But Jesus meets us in other ways – serving the poor and those who are in need or suffering…  By being God-like in selfless, authentic love… By experiencing forgiveness ourselves and offering it to those who’ve hurt us.
Jesus, the Good Shepherd, has gone to hell and back to save us.  The last thing he wants anyone to do is for us to look to cast anyone into that abode for failing to live their faith lives up to their expectations.    I know mine and mine know me – Jesus promises us.  May that be our hope here and now… and always.