Hi everyone – JESUS IS RISEN FROM THE DEAD! ALLELUIA!!!  Here’s my homily for EASTER SUNDAY – THE RESURRECTION OF THE LORD – April 1, 2018.  The Gospel for today comes from Mark 16: 1-7 (shared below).  Thanks as always for stopping by to read this blog; for sharing it on your social media; and for your kind feedback and comments.  Happy Easter to you and your family!! God Bless – Fr Jim

When the sabbath was over,
Mary Magdalene, Mary, the mother of James, and Salome
bought spices so that they might go and anoint him.
Very early when the sun had risen,
on the first day of the week, they came to the tomb.
They were saying to one another,
“Who will roll back the stone for us
from the entrance to the tomb?”
When they looked up,
they saw that the stone had been rolled back;
it was very large.
On entering the tomb they saw a young man
sitting on the right side, clothed in a white robe,
and they were utterly amazed.
He said to them, “Do not be amazed!
You seek Jesus of Nazareth, the crucified.
He has been raised; he is not here.
Behold the place where they laid him.
But go and tell his disciples and Peter,
‘He is going before you to Galilee;
there you will see him, as he told you.'” 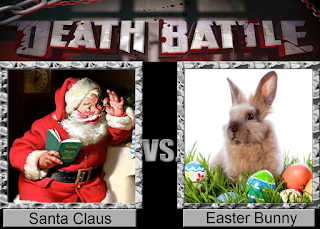 For the kids, if we put up Santa versus the Easter Bunny… Come on… It’s no contest! Santa with his many, many presents; yeah we do have that basket to thank Easter Bunny for, but…  Christmas 1; Easter 0

In terms of decorations, we have the elaborate light displays, the beautiful Christmas trees,  and every things decked out in red, green and white (colors of the Italian flag… couldn’t be more perfect) and so much more, while on Easter it is mostly colored eggs.

Even in the Snoopy/Charlie Brown arena A Charlie Brown Christmas is a beloved Television classic; I doubt if most people even know there’s a Peanuts Easter Special.  (As a huge Snoopy fan, I have to admit the It’s the Easter Beagle Charlie Brown is not really noteworthy.)

These realities hit me the other night, when I barely could find an Easter card. I probably could already find some Hallmark Previews of cards for Christmas 2018.

Why is that?  Granted, these are all the commercial/marketing aspects and really shouldn’t be the focus or the barometer of what’s most important about these holidays.   I’m not trying to advocate another holiday season where the commercial aspects outweigh the religious ones for people.  Because for Christians, we know that Jesus rising from the dead is the most important thing that happened in Human History.    In fact, if He didn’t rise from the dead, there would be no reason to care about his birthday.   So logically speaking, I think most of us recognize that Easter is the most important— well not just a day, but event or thing—that we believe in as Christians.

But at the same time, I think that even if we polled Catholics, or all Christians, which holiday is more important to them, Christmas would probably edge Easter.  Christmas seems much more joyful, peaceful.  When we come to Church on Christmas we hear the Gospel stories that despite all the chaos, confusion and fear, ends with a beautiful nativity scene.  We leave Mass imaging the Blessed Mother Mary, St. Joseph and baby Jesus.  While in actuality it might not have been the case, we still have the refrains of a silent, holy night in our hearts and minds. 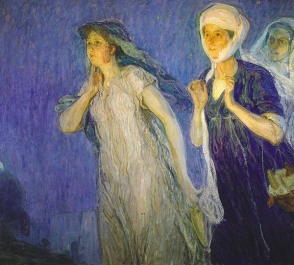 With this Gospel of Mark that we just heard, it makes it impossible to ignore the horrific things that happened to Jesus on Good Friday.  The things that this past Holy Week brought to the forefront and center were the betrayals, arrests, trial, torture and death of Jesus.  They are very much apart of the Easter story. We hear of Mary Magdalene, Mary, Salome — the three courageous women leaving the apostles and disciples who had all failed Jesus in the moment when He needed them to be there for Him and were now cowering in fear, hiding away from the authorities.  These three women leave them to go to the tomb and perform a final act of charity—to anoint Jesus’ dead body. Instead, they discover an empty tomb.  The final line of this passage which was omitted from the lectionary, says “The women went out and fled from the tomb, for terror and amazement had seized them; and they said nothing to anyone, for they were afraid.”

They were afraid  – and you know what? I think most of us are too when we really think about Easter.  The birth of Jesus at Christmas, we can joyfully celebrate.  The idea of God being born into the world is a beautiful thought, and coming in the innocence of a baby is almost a universal thing that is able to speak and touch every human heart.

But to even get to Easter, means Palm Sunday, and Good Friday when we recount the trial, death and burial of Jesus.  And that also brings to mind some universal things that speak to every human heart… things that for the most part, we’d rather not think about or acknowledge.  Who hasn’t experienced the cross or suffering in their lives?  Even some unbelievers will say, “I have a heavy cross to bear”. With things like killings in wars, terrorism, school shootings, and closer to home when we have with loved ones afflicted with sickness and disease; when we struggle to make ends meet; when we are weighed down in mourning and grief over the death of someone near and dear to our hearts, we can relate to those horrors that Jesus suffered and probably can add a few more things to the list.  Any one of those things is enough to debilitate someone to stay in whatever tomb we dwell. The world can be a scary place.

Which is why I love the Gospel of Mark.  St. Mark writes the whole Gospel with this breathless energy:   He knows and has experienced Jesus risen from the dead.  That’s why this, short Gospel account of the resurrection, ends with simply the empty tomb and an invitation to his followers, to “go back to Galilee.”    That is more than just Jesus sending them to a meeting place where he can get the gang back together.  Jesus had first called them at Galilee.  That’s where the fishermen dropped their nets and decided to follow Him.  That’s where they had first encountered Jesus, and so now, they have to go back and recall his preaching, think about his miracles, they even have to confront their failures, the pains, the losses, the fears and betrayals to their community— they have to re-read everything in the light of the resurrection of Jesus. 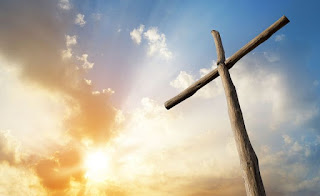 So it is for us.  We love Christmas because it’s got a nice story with a beginning and an end.  But with today’s Gospel ending with “He is going before you to Galilee; there you will see him, as he told you…”  It’s kind of leaving it up to us, Jesus’ followers of our time, our age.   How will we let the joy of Jesus conquering death, and promising us who believe and follow him to conquer death to change our world-view?  How will we allow the risen Jesus Christ to look at our crosses, our passions, our Good Friday’s in light of Easter joy?  To see how Easter changes everything.  To see how those stones of sadness, despair, hatred, fear that Christ’s resurrection rolls back as He calls us to selflessness, humility, forgiveness, love….

But we have to make the first step to roll those stones back.  I think that’s an important point those three women from today’s Gospel- Mary Magdalene, Mary, Salome tell us in today’s Gospel.  They went to the tomb not knowing what had happened yet.  They had to make a choice either to let the fear, the grief, the disbelief of Good Friday inhibit them and isolate them in despair – or – they could let the love, the compassion that was stirring in their hearts to summon a strength within themselves to go to that tomb.  And when they do, they are the first witnesses to the resurrection.  Jesus rewards that battered, but persistent faith – he lifts their heavy hearts and they are able to soar – to go and spread the good news… the Great news that Jesus has risen.

And so it is with us.  We don’t have to fake it and pretend that there’s some crosses, some passions, some crucifixions that we’re not still struggling with.  But, we know we’re not defeated. We know those aren’t our ends.   That’s why we too go back to Galilee, to encounter the risen Jesus and look at everything in the light of the joy of the resurrection.  Then we will see how as beautiful as  Christmas is, that is only the beginning of the story of Jesus… Easter is His story and, even more spectacularly, our story as well. And with that, Jesus makes real to us the hope of a new life, the hope of sharing his triumph over death and living with Him in God.   May the light of Christ, rising in glory from the grave dispel all the darkness of our hearts and minds.  Happy Easter!