Hi everyone.  Here’s my homily for the FOURTH SUNDAY OF LENT – MARCH 11, 2018.  The readings for today can be found at http://usccb.org/bible/readings/031118-year-b.cfm .  As always, my thanks for reading blog, sharing this on twitter, facebook, reddit, etc. and all your comments and feedback.  Have a great week – God Bless, Fr. Jim 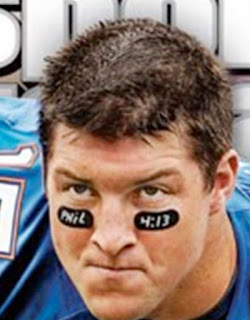 HOMILY:
While Tim Tebow’s pretty well known for his public witness and expressions of faith, not too long ago, he shared an interesting story that I had never heard of before.  The 30 year old who has played football both in college and in the NFL (and is now playing Major League Baseball for the Mets) talked about something seemingly random that he did that had nothing to do with sports.  As he and his teammates from the University of Florida during his Junior year were getting ready for one of the biggest games of their season, he noticed that different guys were putting different eye blacks under their eyes.  Rather than simply putting a black strip there to reduce the glare from the sun while on the field, they would write little messages like “Hi Mom”; “I love you” to their girlfriends or something similarly personal.  Tim said he thought to himself it would be cool to write something inspirational or encouraging.  So he was thinking maybe I’ll write “God Bless You” but then decided to put “Philippians 4:13″ which points to the passage in scripture saying I can do all things through Christ who strengthens me which he saw as something perfect for him as a devout Christian playing a tough sport.    After the Gators defeated Tennessee in that game, and the team kept winning games (and Tebow kept wearing the eye black) of course Florida fans started assuming that this was the secret for their success on the field and fans started putting the same eye black with Philippians 4:13 on it hoping the team would continue to succeed. 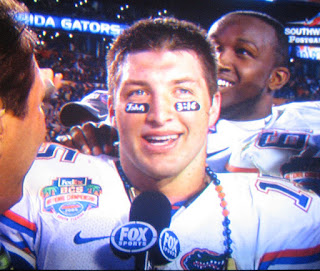 As they were preparing for the championship game at the end of the year, and Tim was getting ready to go on the field, he said that he felt God had put on his heart that he should change the verse.  Which for sports fanatics is almost unheard of…  Sports fans can get incredibly superstitious… wearing ball caps inside out and thinking that will somehow assist the team in “rallying” from a deficit.  So here he’s had this incredible run, this incredible season and now he’s going to change the eye black?  Tebow acknowledges that this was probably going to be the biggest audience on national television that he would play in front of, so since the last passage had received a good amount of attention and press this was a perfect opportunity to share something else from the word of God.  So what did he pick?  John 3:16.  Which was just in the Gospel we heard proclaimed.  Why?  Listen to the words from that passage again:
For God so loved the world that he gave his only Son so that everyone who believes in him might not perish, but might have eternal life
In that one sentence from scripture, John 3:16 reveals to us the heart of God,
the mission of Jesus Christ and the greatest of hopes that you and I have as Christians.
-we don’t believe in a pagan-type of god (or gods), who acts arbitrarily for their own amusement…that we need to make some bizarre sacrifices too in the hopes of appeasing it so it won’t smote us or disfavor us.
– we don’t believe in a god who threw this creation into existence,- and then he has nothing more to say or do with us.
– we don’t have a god that we must live in fear of or feel unworthy of approaching…
In Jesus Christ all of those theories, notions, beliefs are shattered.

Because God so loved the world…
God so loved you and me…
God so loved everyone of us who lives and moves  that He is constantly rooting for us, reaching out to us, seeking us, coming to us in His son Jesus Christ all with that deeply rooted hope and desire in His Heart – let’s just pause here for a second, and realize we’re hitting the deepest desire of the Heart of God, which is –  that after seeing all the illusions, passing fads, and broken promises of the  world that offers us “happiness” that at best is fleeting (and at worst makes us anything BUT happy) fade away –
that we will make that essential, life-altering, life-giving decision to Believe in Him…. to Follow Him… in the here and now as we’re constantly challenged with decisions and choices that reflect whether we’re truly living for him or someone else all the way into spending an eternity with Him.

Makes sense why this is considered one of the most important passages in the entire bible – and why it’s so often cited.  But one of the amazing things to me about Tebow’s story with the eye black thing was that he said he put the tape on for that championship game, played (and won) the game and really didn’t think much about it.  A couple of days later, the team’s public relations guy contacted Tebow and told him that during that championship game, over 94 million people googled “John 3:16.” 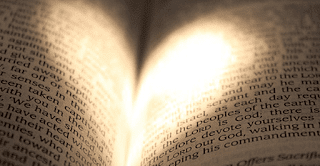 That God so loved… and so loves the world… that He gave and gives His son so that everyone might not perish but might have eternal life – that is up to each of us to communicate.  And not simply imitating Tebow and walking around with black tape with John 3:16 on it.  To be honest that would be kind of weird for you to randomly walk into class like that… and that can be too easy to let ourselves off the hook thinking “if I just put that on my facebook profile I’m good.”  It worked for Tebow because of that unique circumstance -coupled by the fact that he truly lives a life that testifies to that being his Hope and Belief in a number of beautiful, meaningful ways.  For you and I, as we encounter this scripture during this journey of Lent, who are the broken and broken hearted that we are being asked to bring the healing presence of Christ to?  Who are those who have fallen down or been pushed aside, that Jesus wants to use our hands to help pick up and raise up again?  What areas of death, and destruction are out there that the God of life and restoration is looking for us to bring the risen Christ to usher new life into?

If we want this season of Lent to really be effective and meaningful, our faith and actions need to unite in authentic, genuine ways that we are able to communicate the love, the mercy, the heart of our God – so that John 3:16 isn’t memorized nor trivialized – but rather is actualized in our lives so that others may know the meaning of John 3:16 and come to know the love of God.