Hi everyone… so this week, I’m heading to Kentucky with a group of students for a Mission Trip in the Appalachian Mountains.  So here’s my homily for our Mass that we’ll be celebrating in West Virginia – halfway enroute to Kentucky.  Can I ask for your prayers for our safe travels and for a meaningful, impactful week for all of us to truly encounter Jesus Christ in a new way.

Depending on Internet connections… I’ll try to post some updates from the week here.

The readings for today can be found at: http://www.usccb.org/bible/readings/030418-year-b.cfm   Thanks as always for reading, for sharing this blog on Twitter, Facebook and reddit – and for your comments and feedback.  God Bless!  Fr Jim 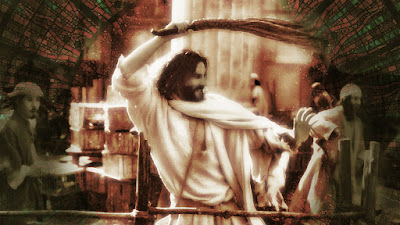 HOMILY:
I always liked this Gospel.  Angry Jesus.  Yes.  He gets so fired up he makes a whip, knocks over tables and is enraged.   Of course I like that because in my twisted logic that gives me permission to lose it when someone cuts me off on the Garden State Parkway or something… which of course it doesn’t.

Jesus is fired up because His Fathers House – the temple was being misused.  It wasn’t uncommon in Jesus’ time for them to sell oxen, sheep and doves to pilgrims traveling to Jerusalem.  Remember when Jesus was first presented in the temple by Mary and Joseph that they brought a pair of turtle doves/pigeons as an offering.   So these shop keepers were convenient for your pilgrim on the run.  They could just purchase those things there.  But – they were overcharging.  They were taking advantage of the people.  The sellers, the money changers weren’t there trying to assist Jews in a sacred moment.  They simply wanted to make money off of them.  So Jesus sees how this whole thing has desecrated His Father’s House… the temple.  That’s what gets him fired up and angry.

But, as is often the case, there’s more than just a historical incident being recalled in this Gospel.  Notice a few moments later when Jesus prophecies “destroy this temple and in three days I will raise it up again”.  Those in the crowd think the guy is nuts.  Huh?  It’s 46 years and we’re still not done constructing this place – they think.  What’s he talking about?   What he was talking about was himself being the temple… being God’s House.

So let’s take it a step further… We read elsewhere in scripture (Paul’s first letter to the Corinthians 3:16 to be exact) that we ourselves are temples of the Holy Spirit… we are to be a dwelling place for God.  All of a sudden, if you’re like me and you think about Jesus entering into this area, I’m not such a fan of Angry Jesus… I want gentle Jesus.  I want merciful Jesus.  Because does he see the hypocrisy in my heart; the ways that I’m not acting as I should… as I’m called to?  Most definitely yes.

Fortunately, as we are honest with that; and as we welcome Jesus into this space, he has no need to get angry.  Because as we’re honest, as we welcome Him, we’re demonstrating a desire on some level to be rid of that… Saying we don’t want to live like that…  And Zeal for His House – you and I – our hearts, souls and lives – that consumes Jesus as well.  It consumes Him in the gift of Himself on the Cross – which is made real in the Eucharist – and given to us to consume as well.

As we do, may His love consume us… that we may become the true temple, the House of the Father that He desires us to become… and with His grace and our cooperation, will.