Hi everyone, here’s my homily for the FOURTH SUNDAY IN ORDINARY TIME – JANUARY 28, 2018 – The readings for today’s Mass can be found at:  http://usccb.org/bible/readings/012818.cfm.  Thanks as always for reading, for sharing this on Facebook, Twitter, reddit and other social media and for your feedback and comments.  Hope you have a great week!  God Bless – Fr Jim

HOMILY:
It was about a year and a half ago that the Newman Center at Montclair State University welcomed Father Vincent Lampert as a guest lecture.  Here was a parish priest from Indianapolis who for the most part is very unknown, coming to a public, state run university campus.  And he filled the Conference Center (over 600 students) for the second time (he was here in 2010 as well with similar crowds) on a Wednesday Night and had people on the edges of their seats for over 2 and a half hours. 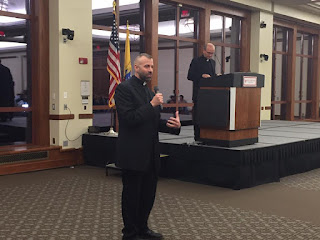 This was no ordinary parish priest.  Father Lampert is an official exorcist of the Roman Catholic Church who was trained by the Vatican at his Bishop’s request to learn how to perform this dramatic, often depicted but very rarely understood ritual of the Church.   When we announced that Father Lampert was coming and what the topic was, it’s true, we had fun with the advertising and wanted it to be a bit provocative.  Coming a few weeks prior to Halloween, there was already that imaginary “spooky sense” in the atmosphere with decorations on campus of spider webs, tomb stones, witches and black cats.  We billed it as “An Evening with an Exorcist” – and before we knew it, there was quite a stir about it both on and off the campus.
For the most part it seemed people came out of curiosity.  And I don’t know if I could pit a guess on what percentages this falls to, but I would say a majority came in thinking “This isn’t really real, right?  We don’t actually believe the devil possesses people — That there’s evil operating in the world?”  – We’re too sophisticated to believe such things (especially in this academic environment)
Father Lampert would most definitely disagree with those notions, not simply because of what the Church and the scriptures teach – but by his own personal experiences.  Witnessing some incredibly dramatic (and for some in the audience, terrifying) things as he has tends to make you more definitive about tthe presence and activity of evil in the world.

And while he did share those experiences with us of people posessed:  people levitating, speaking in strange languages and having super human strength – one of the major things he wanted people to walk away from the lecture wasn’t just that exorcisms are real, they’re not simply the stuff of the movies and fiction – but even more important that the devil is real.  The evil one is real.  And while “demonic possession” is very, very, very rare (I think that he said something along the lines of out of 100 calls he receives asking for advice, 99 won’t be demonic possession) the presence and activity of the evil one is much more common, much less dramatic – subtle even, as the evil one doesn’t need to do great and spectacular things.  What are the main goals of the evil one?

To cause division among humanity so that brother turns against brother – sister turns against sister…  To cause division within ourselves so that we find ourselves conflicted falling short of being who we’re called to be;   To his ultimate goal, desiring to cause separation from the Heavenly Father and us his sons and daughters– who became such through Jesus Christ.   With those goals, the devil doesn’t need to become overly dramatic in causing such things to happen.

We can see demons all around us – Roaming our world not so much with red pitch-forks and horns, but in much more real and destructive ways:
-People who are suffering from a demonic possession by their addictions to alcohol, or drugs  blinding them to the pain they are in and causing those around them. . .
– People who are tempted by the demons of lust, being trapped by pornography, giving into those distorted desires causing them to have pre-marital sex or affairs…
– There are demons who in the forms of celebrity and entertainment mock our religious beliefs, mock our convictions.
– There are demons of greed and materialism that cause people, institutions even nations to have uncontrollable appetites and will do anything, mis use, abuse and trample those who stand in the way of those pursuits…
– There are demons of laziness and boredom – the hours we can waste being lulled by the radiation screens of our TV’s, computers, phones that make us zombie like.  (If you doubt this one, see how well we react when “the cable goes out” or there’s a power failure… )
– and there’s so many personal demons that people suffer from, often times in silence, afraid, embarrassed and in real pain…
The thing is we’ve gotten so cautious not to speak of these things in this way.  It’s not politically correct.  People’s sensitivities might be offended.  You might panic individuals and “turn them off” to religion.  Yet as Father Lampert said in his lecture – if there’s no evil in the world, then there’s no need for Jesus, is there?  Jesus simply becomes a nice moral teacher, a guy who said some really nice things that make for nice bumper stickers and gives us an excuse to have parties and gatherings for his birthday.

Yet today’s Gospel gives us a different perspective that we need to remember.  We as Catholic-Christians need to realize the reality of this evil enemy we face who comes to destroy.  Not getting overwhelmed by fear (which is one of the devil’s greatest tools) but in trust, in confidence, in believing in the one who teaches and speaks with authority: this Jesus of Nazareth who even the demons know who he is (as they’re quoted in today’s gospel)– as the Holy One of God.  These demons recognize Jesus’ power,  just before he casts them out of the person one who was suffering because of there action in their lives.  Jesus’ casting out of the evil from their midst wasn’t just something to cause a buzz and all 2,000 years ago.  Jesus hasn’t “saved” us from evil in the past tense… it’s an ongoing thing.

Jesus continues to come to cast out those demons who cause us to suffer.  The Sacrament of Reconciliation – yes, confession – is one of the most tremendous gifts we should treasure.  We have an opportunity to take responsibility for the times I’ve allowed the demons to run free in my life and hear Jesus’ words of forgiveness said directly and personally to us through a priest and those sins are instantly gone.  The Eucharist – is another opportunity: where we receive Jesus body and blood, the only food that can nourish us, strengthen us in these spiritual battles…  Only the devil could twist us so much that so few would utilize these Sacred gifts.  Someone once said “people go and confess to Oprah or Dr. Phil, and thousands tune in to watch it… and after the show ends and the credits role, those sins and demons remain.  In confession, we have an opportunity not to simply reveal those sins, but to get rid of them and to start again…and then nourished by His Body and Blood to be prepared for the spiritual battles and temptations we face.
Jesus also continues to cast out demons outside of these walls and these sacred and essential things that we celebrate here.  All of you who helped out in collecting, organizing or giving clothes and food to the Homeless in NY last night – participated in casting out the demon of indifference, of neglect, or apathy in sharing Jesus’ love with those who had no way of repaying it other than saying “Thank You.”  All of you – who when you leave here tonight, somehow, in some small way are loving, kind, attentive to someone who is a stranger, an outsider, not part of your inner circles – you help to cast out demons of loneliness, despair as you bring Christ’s light and love to corners of this campus that seem comfortable in the darkness.  In all of those ways, what we receive and nourish on here has real time effects in our own world, here and now.

The day after the exorcist left our campus, there was an inter-faith conversation that one of our professors from the Religion and Philosophy department runs on a weekly basis and she asked students their perceptions – what struck them in the 2 and a half hour presentation. I was expecting that they would share some of the dramatic stories Father had shared with them or some of the interesting and various questions that were asked by the audience.  But the first young lady, who wasn’t Catholic, spoke really surprised me in a good way.  She said “What struck me?  This guy had seen all of this crazy stuff and he just wasn’t scared.  And when Fr Lampert said ‘What do I have to fear?  Jesus is already victorious over all of this, so there’s nothing to be afraid of’ I really believed him.”

For those of us who gather here today, those same questions of faith are presented to us – “What do we have to fear?” Do we believe Jesus is victorious over evil?  Even more important though is the question that precedes that, Do we recognize the evil that is in our midst… and want it driven out?