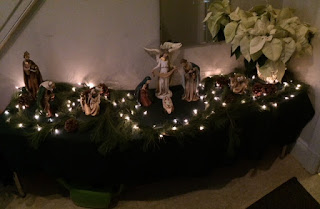 Quick commercial –  As we come to the end of the Christmas Season we are also coming to the end of the Newman Catholic Center at Montclair State in our Annual Christmas appeal.  You can read about it at  http://www.msunewman.com/appeal .  Many thanks for your consideration!

The song “The 12 Days of Christmas” is known for the lengthy, strange (to our ears) list of items that celebrate Christmas for 12 days (which also seems strange since most stores here in the United States on December 26th have already started to put out Valentine’s Day merchandise).  The “12 days” usually refers to the length of time from December 25th – the Nativity of the Lord to January 5th, which is the Eve of the traditional celebration of the Epiphany – (which for Catholics in the US is moved to the First Sunday after January 1st).  The Epiphany was considered the “end” of the Christmas season (although you’ll find people in the Church who will argue that Christmas season goes to “The Baptism of the Lord” which is usually the Sunday after the Epiphany – and others who would point to February 2nd the Feast of the Presentation of the Lord).

There was some research into the origins of the traditional song that points to Catholic symbolism of each of the things described in the 12 days of Christmas:

1st day – “my true love sent to me… a partridge in the pear tree”: the “true love” is Jesus himself – and the partridge is the gift of himself, because partridges have been described as a bird willing to sacrifice themselves to protect their young from predators.

4th day – “four calling birds” – represent the four evangelists (Matthew, Mark, Luke and John) who spread the Gospel of Jesus Christ to the ends of the earth

5th day – “five golden rings” – represent the first five books of the Old Testament – “The Pentateuch” – Genesis, Exodus, Leviticus, Numbers, Deuteronomy – considered the most important of the Hebrew Scriptures from Creation of the world to the death of Moses.

12th day – “12 drummers drumming” represent the 12 points of belief in the Apostles Creed: 1: I believe in God, the Father Almighty, Creator of heaven and earth. 2: And in Jesus Christ, his only Son, our Lord. 3: Who was conceived by the power of the Holy Spirit and born of the Virgin Mary.
4: He suffered under Pontius Pilate, was crucified, died, and was buried.  5: He descended into hell. The third day he arose again from the dead. 6: He ascended into heaven and is seated at the right hand of God the Father Almighty.  7: He will come again to judge the living and the dead.  8: I believe in the Holy Spirit, 9: the holy catholic Church, the Communion of Saints 10: the forgiveness of sins,
11: the resurrection of the body  12: life everlasting.