Latest News
Home /Blog/A HOMELESS MANS EXAMPLE & CHRIST’S REIGN
Hi everyone – here’s my homily for the Solemnity of OUR LORD JESUS CHRIST, KING OF THE UNIVERSE – celebrated on Sunday, November 26, 2017.  The readings for today can be found at: http://usccb.org/bible/readings/112617.cfm.  Thanks as always for stopping by to read this blog; share it on Facebook, Twitter and Reddit; and for your feedback and comments.  Appreciate the thousands of people who stop by week to week to check this blog out.

Quick commercial – this Tuesday is the National #GIVINGTUESDAY.  Appreciate it if you would consider supporting the Newman Catholic Center at Montclair State.  You can read about our Christmas appeal at http://www.msunewman.com/appeal .  Many thanks for your consideration! 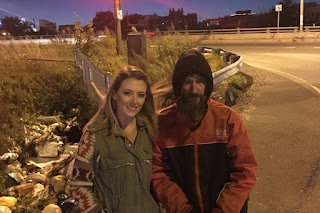 HOMILY:
A few weeks ago, Kate McClure was driving from Philadelphia to her home in New Jersey and ended up misjudging how much was left in her car’s gas tank.  As she pulled off to the side of a dangerous highway, she frantically discovered that she didn’t have any cash on her.  She just decided to get out of her car to get some help or assistance when a homeless man, who had been quietly observing as to what was happening, came over. Initially, Kate was a little apprehensive as the man named Johnny approached her, advising her to get back into her car and lock her doors while he offered to go to a local gas station and get her help.  Soon after, he returned with a can of gas that he had spent the last $20 he had on him to purchase for this stranger he had just met.
Kate was overwhelmed by his kindness and generosity, but was unable to pay him back that night.  She promised to somehow repay Johnny’s act of incredible selflessness – which she did several times.  She began by repaying him for gas as well as purchasing a jacket and some gloves.  On another occasion, she returned with a hat and warm socks.  Each time she met him, she was moved by his relentless selflessness and generosity.  Upon giving Johnny a box of cereal bars, he first asked Kate if she wanted one.  When Kate gave some Wawa gift cards to Johnny, he said “I can’t wait to show these to the guys” (being the fellow homeless he knew, who he shared with).   Every time Kate would meet up and talk to Johnny, she would get to know him better – including how he had served as a United States Marine and had also been a paramedic. He explained in these encounters how a series of missteps resulted in a job falling through, paperwork getting lost, eventually causing him to lose his home.  Suddenly a single night of homelessness increased to a week, to eventually over a year.  Kate just felt she needed to do something more.
So she took to social media.  And in this case, social media proved its value.  She started a go fund me page on November 10 with the hope of raising $10,000 so as to get Johnny back on his feet.  As the story has indeed gone viral; by Friday afternoon, two weeks later when I last checked, the total amount raised had gone up to $323,780. 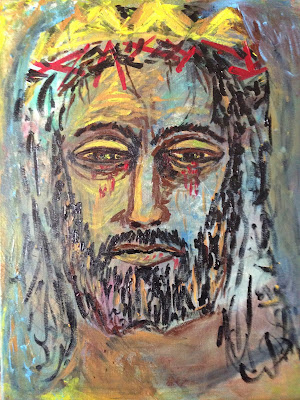 As Christians on this day where we celebrate Our Lord Jesus Christ as the King of the Universe – the sad thing is that we are surprised to hear a story like this. That is what makes this so newsworthy – kindness, generosity and benevolence have become rare occurrences.  We imagine what is supposed to happen with each of the characters within this situation, maybe recalling other news stories with far less charitable, heartwarming experiences.  Regardless of those variations that come to mind – the result is the same is that it adds to the cynicism, isolationism and defeatism that have almost reached epidemic proportions in our country.
Yet, the fact that there’s a twinge in our hearts when we hear about Kate and Johnny’s story points towards something else- something inherently noble.  That twinge is quite simply the ever so beautiful virtue of  hope.  That Jesus’ glorious vision of His Kingdom laid out for us in today’s Gospel is possible…
even here and now…
even in this cynical, isolated, defeatist environment…
even as we hear the list that Jesus mentions and can think of the numerous failures, disagreements, political fighting and scapegoating that has paralyzed so many of us from taking personal responsibility for doing our part to see that the hungry are fed; the thirsty are quenched; the naked and destitute are clothed; the helpless are extended a helping hand; the ill are cared for; the imprisoned are visited –
We are reminded that all of this is not just possible, but necessary; it is very much within our reach.  So much so that a homeless person is able to be the hero of a wonderful story; that the person receiving these acts of unexpected kindness and generosity is able to mobilize people around the nation to surpass one tremendously generous goal after another.  (I checked again last night, the new total raised is up another $40,000 )
Today, as Catholic Christians, we mark the end of the “Church year” (the pre-Christmas season of Advent is a “New Liturgical Year” next Sunday) And as we end this year, we think about how over that year, at Sunday Mass we’ve basically read the entire Gospel of Matthew – from Jesus’ nativity to his death on Calvary; from the empty tomb to His Ascension.  We have reflected on His teachings and have been inspired by His unending compassion; amazed at His miracles; challenged by His mercy and forgiveness; and hopefully, transformed by His love.  As we end this year, the Church offers us this last great celebration where we boldly proclaim to the world that Our Lord Jesus Christ is indeed the King of the Universe.  That is a truth that the Church is proud to profess day in and day out.
But for each and every one of us – that also poses a challenging question.  Is Jesus Christ indeed my King?  Does He simply fall into some neat boxes of my life that we assign to “Religion” or does His reign influence every aspect, every decision and every relationship of my life?  Does His reign change my vision of humanity that expects us to see in others Christ himself; to serve others because they possess the very life and dignity of Christ?

It is up to you and I to make Johnny and Kate’s story the norm – NOT the exception – to embrace this mystery of Christ – who we’ve remembered and celebrated all year long, who calls us to embrace this all-powerful, ever-merciful God, who has loved us enough to become one of us – and who asks only that we generously share the love He has so freely given to us with others.