Latest News
Home /Blog/“THOUGHTS AND PRAYERS” – DO THEY REALLY MATTER?

Hi everyone – here’s my homily for SUNDAY NOVEMBER 12, 2017 – the 32nd Sunday in ordinary time.  The readings for today can be found at: http://www.usccb.org/bible/readings/111217.cfm.  Thanks as always for stopping by to read this; for sharing it on social media like Facebook, Twitter and Reddit; and for your feedback and comments.  God Bless – Fr. Jim 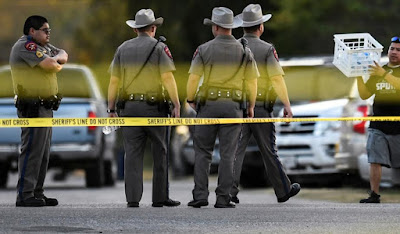 HOMILY:
Another week, another horrific tragedy.

Between devastating storms, a massacre at a concert, a terrorist attack in NYC, and now, this past week, a massacre in a Church, which left 26 people dead – ranging in ages from 18 months to 77 years old – the psychological, the emotional, the spiritual toll that all of this is taking on Americans is hard to assess. I worry that we’re becoming numb or even worse, indifferent, as the tragedies pile up. A commentator remarked that the number of tragedies isn’t really different than it has been years ago – the difference is that now we can instantly share them globally like never before. I do not know if that’s true – or if it provides any comfort at all.

One thing that is true in this information age is that people can instantly weigh in on whatever event it is that transpires. So, when the news out of Texas spread last Sunday after noon, there was an impulse (and in some cases, an expectation) that people would say something in 140 characters (or now I suppose 280, after Twitter’s recent update). A common reaction was observed from people through their similar response posted online, which mostly read ‘thoughts and prayers’, to the victims and their families.

It didn’t take too long for the phrase to turn into an issue and initiate a debate. Some criticised the politicians who offered their ‘thoughts and prayers’, accusing them of using it as a cover for not proposing a new legislation that they believed would help prevent such types of tragedies from happening. Politicians and others who offered such a sentiment countered that they were being empathetic to people who were in pain and that it wasn’t appropriate that their intentions were being questioned. Before you knew it, the debate over “thoughts and prayers” became something vehemently argued. I hesitate even bringing this up, because there’s a part of me that’s just disgusted with this “outrage” mentality where – no matter what the issue, what the topic, what the opinion – there seems this default posture of people taking just one side while criticizing the other in a snarky short message bantered around the social media. 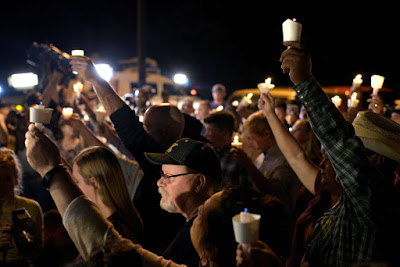 However, something hit me the other afternoon, which took me by complete surprise. Maybe the critics do have a point. What does it mean when we say “thoughts and prayers?” Because if it’s just a default response to whatever tragic situation we’re encountering – whether it’s the tragedies that affected large numbers of people in Texas, NYC, Las Vegas; the regions affected by the Hurricanes – or some troubling news we receive on a closer more personal level – My best friend’s husband left her… My father died… my aunt has got cancer… to say “Sad to hear this news… Thoughts and prayers” – then perhaps that’s not enough – (in fact, that still leaves 95 characters , if your twitter hasn’t upgraded and your still confined to only 140 characters).

Part of the reason this came to mind was when I looked at what St. Paul says in today’s second reading (Thessalonians 4: 13-18). As I looked at it, it hit me that St. Paul has a tweet-length sentence that could be similar to “Thoughts and Prayers.” He offers this hope-filled sentence “We shall always be with the Lord.” He shares those words in this passage where he is writing to a community who also have been dealing with death – and they’re fearful. Christianity was still relatively new. They had been taught that Jesus was going to return and that God’s kingdom would finally be established. And they were expecting it to happen pretty quickly. In fact, the apostles themselves were expecting it to happen in their lifetimes as well. When that didn’t happen and fellow Christians started dying, some from the natural course of life, others from the persecutions being leveled on early Christians, they become more and more anxious.

Paul started out saying in this passage “We do not want you to be unaware, brothers and sisters, about those who have fallen asleep, so that you may not grieve like the rest, who have no hope” – and then he explains to them what he believes with his very heart and soul – that those who believe in Jesus and who died before His second coming, will also be brought into God’s presence because we shall always be with the Lord. More than just saying “there, there… don’t worry….” these words spoken by him matter. Paul believes in these words with every fiber of his being.

As the Thessalonians first read those words, they probably had flashbacks to Paul preaching to them. They could imagine him speaking these words from his heart and soul – just as he did when he first shared the faith with them. As you and I hear these words today, we know of his conviction, recalling how St. Paul gave up the comforts he enjoyed, his livelihood, his status, and eventually his own life, all because of his encounter with Jesus Christ, because of his conversion, because of his relationship with Him. 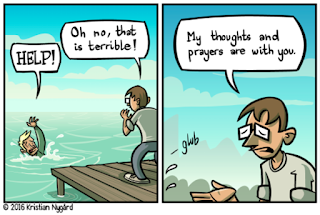 So some people’s visceral reaction to our sharing our “thoughts and prayers” is because they objectively don’t see the point. Maybe they haven’t seen the effect of these prayers in their own lives. Maybe they have fears and doubts that they feel aren’t being given attention. Maybe they can’t reconcile how thoughts and prayers to a good and loving God are doing any good when such evil is experienced and still exists after all these thousands of years later. And even more, maybe they don’t see or hear Christians being Christian. That last point really rang home with this whole thoughts and prayers debate. This one actor whom I’ve always liked in the different roles that he’s portrayed wrote an initially dismissive tweet about thoughts and prayers. Soon afterwards he retracted them – apologizing and stating that in his initial shock and horror at this horrifying story he was too impulsive and didn’t mean to attack people of faith. Three days later, a news commentator, again someone whom I also like (who proudly professes his Catholic Christian faith) used the actor’s initial tweet in a diatribe on the “war against prayer”, completely ignoring those follow-up tweets that was posted by the actors. This disappointed me a great deal.   If I knew the rest of that story – this reporter most definitely did and opted not to share it.  To me that’s just dishonest and more than slightly awkward in a diatribe “defending thoughts and prayers.”

For thoughts and prayers to mean something, for them to be more than a mere sentiment or trite saying, they need to truly matter to those offering them. We have to be truthfully offering our thoughts and prayers to the Lord. Which means, we have to be in a relationship with Him. That’s what Jesus is trying to explain in this parable in today’s Gospel. At the core of it, what he’s getting at in all these bridesmaids and lamps and oil is about having an authentic relationship with Him That’s different than simply knowing him, or invoking him in moments of crisis. An authentic relationship with him leads to a belief, a faith like St. Paul had – where our life becomes more like Christ’s. That lamp in the parable represents a living knowledge and friendship with Christ – a dynamic, personal relationship with Him. That lamp’s oil is our good works – when we actually put our faith into action to help those who are suffering, those who are struggling, those who are in need. That lamps oil is exemplified in acts of mercy and justice. That lamps oil is in the difficult acts of forgiveness. That lamps oil is in our authentic acts of love – like when one of the survivors of the terrorist attack on Halloween who lost 5 of their friends, came here to celebrate their 30th anniversary of graduating high school said: We will forever mourn our friends. It was love that brought us here and love will continue to unite us… We want to make a plea: that love conquers hate, that life overcomes death.” That lamps oil is exemplified in our faithfulness – like when the Pastor of the Sutherland Springs Church in Texas said, as he mourned his “beautiful and special” 14 year old daughter killed in this unspeakable evil, – I don’t understand, but I know my God does.

When our lamps our filled with that type of oil, when our faith is that fixed on the Lord, than we won’t allow ourselves to be distracted from being attentive, empathetic, caring for those injured, those who died in such an atrocious manner – and for their loved ones who are left behind. And even more, people will know that our thoughts and prayers come from places of authentic friendship with Christ.