Hi everyone – here’s my homily for Thursday, November 2, 2017 – the commemoration of all the faithful departed (ALL SOULS DAY) – The readings for today can be found at: http://www.usccb.org/bible/readings/110217.cfm.  Thanks for reading this blog; for sharing it on Facebook, Twitter and Reddit; and for your comments and feedback.  God Bless, Fr Jim 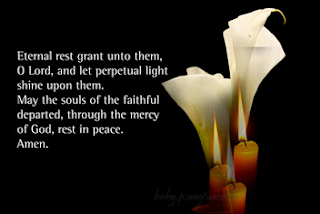 Last night we had our co-sponsorship with LASO talking about some of the similarities with the Mexican celebration Dia De Los Muertos (the day of the dead) and the Catholic commemoration that we mark today, All Souls Day.  It was, as always, a great event.  It was tremendous to have so many people from both organizations come together to talk about something that few of us want to talk about – death.

One of the things that struck me was when the student from LASO was sharing her experience of losing her grandmother a couple of years ago.   She recounted traveling to Mexico to be with her grandmother and family before her grandmother died – and then staying together, having a wake for her grandmother for 9 days and then burying her on that last day.  How the whole family came together to grieve, to be together, and that the whole village would come out as well- come to the home for the wake.  At one point, this student observed that she felt it was awkward how we do it here as Americans because it seems so fast, so short and that people don’t have the same opportunity to be together like she experienced.

She’s right.  Coming from an Italian-American family – when I was growing up, there was a lot of similarities to this student’s experience.  We would have a wake for 2 or 3 full days (in the afternoon and the evening) and then the funeral take place the third or fourth day.  Between the hours of the wakes, we would be together at someone’s home for dinner.  After the evening wake, we would be at someone elses home for coffee and desert.  After the funeral we would be together for a meal.  A month after the person died, we would gather as a family to go to Mass and then have a dinner together.  (Yes I realize there’s a lot of meals and food being discussed… like I said I come from an Italian family so what do you expect?)

In at least the last 15 or 20 years though, there’s been a shift.  Some families have bypassed funerals all together.  Others have abbreviated the services where there will be a wake an hour before the funeral.  Even when my father died unexpectedly 3 years ago, the new norm was to have a wake one day (for one long stretch of 4 hours) with the funeral the next day – which in the shock of his sudden passing seemed to make the most sense to “simplify” and “make it easy for us to get through”.  But the truth is – it didn’t.  At least for me.  The four hours of the wake were a blur because we only had that one shot and so many visitors, we could only speak to people visiting for a brief time.  In one sense it made things simple and perhaps a bit easier in the short term to go through.   But in the long term it sure didn’t. The pain of my dad’s loss even three years later is never far from my heart and mind – nor my family’s. And I’m sure for most of us, we can all think of someone, if not several people who’ve gone before us that it can still be hard to talk about – even saying their name. 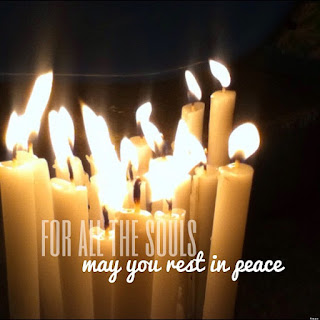 Grieving is hard, is painful.  And as Americans are becoming more and more secularized that reality is something that frightens and disturbs.  And because there’s no way around it, we try to avoid it, deny it, minimize it.  I couldn’t help but think of how Tuesday night we had this horrific terrorist attack which killed 8 people in broad daylight.  The impulse is to continue life as usual – so the Halloween parade went off, the World series was played… and I get the need to be resilient and not let the terrorists win by completely changing out way of life.  But in a sense couldn’t we argue that the terrorists do win if we just allow the senseless, horrific death of 8 people to pass by as just a bad story that we clicked on a link about and then moved on?   Those were 8 souls – who’s lives were ended quite unexpectedly… who’s families lives have been forever changed.  We need to stop, to pause, to remember, to grieve… to respect the person who’s no longer with us.

That’s why the Church in her wisdom forces us in a sense to not simplify, make easier or in any way diminish these losses with this commemoration of All Souls Day and the traditional remembrance of our beloved dead through the month of November.  The Church doesn’t do this to re-open wounds, to force us to grieve again nor to make this an annual time of mourning.  That’s not to say some of those feelings won’t arise – but the purpose of this time is remembering those who died… friends, loved ones, perhaps people you weren’t close to but knew (teacher in your school?  A neighbor down the street who you knew but never talked to).   We remember them… we acknowledge their absence.  We recognize how fearful, how painful that reality is and the Church gently points us to remember other things… God’s word… His promises:
The souls of the just are in the hand of God and no torment shall touch them – the Hebrew Scriptures reminded us in the first reading they seemed in the view of the foolish to be dead   and their passing away was thought an affliction  and their going forth from us utter destruction but they are in peace…

Those words often calm me down when I start to get choked up thinking about loved ones who I miss – to know that they are in the hand of God.    Jesus goes even further and is even more explicit, more direct.  Saying that everything that the Father gives me will come to me… and that the will of God the Father is that everyone who sees the Son and believes in him may have eternal life and that Jesus will raise [us] up on the last day.

Those words of comfort, of assurance are important and essential.  But as human beings there’s often a desire to do something – to want more certainty of that reality.  Which is why the Church invites us to remember and to pray for our loved ones.  Not in a fearful way… not like they are suffering torment if they haven’t yet reached heaven and are in purgatory (that’s one of the main reasons we pray for our departed loved ones who might not have reached the fullness of eternal life in God’s heavenly kingdom… but unlike how it’s depicted, purgatory isn’t a torture or a prison – but a final preparation, a cleansing and purification so a person is fully prepared to be in God’s presence for all eternity) 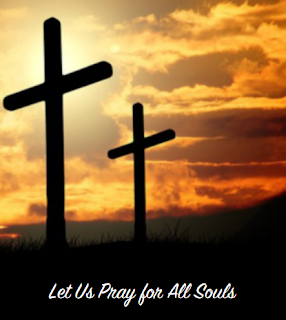 Our praying for our loved ones, is meant to expand our hearts, minds and visions to remember all those who’ve died.  And that these bonds and connections aren’t ended in death.  In many cases that brings joyful memories that might cause us to miss them – but some times they can bring painful memories that are difficult.   People can think of some who have died that there were  resentments, lack of forgiveness or reconciliation on this side of heaven.  In those instances, – our prayers for all the faithful departed are meant to help bring healing and peace on both sides of heaven for the one who might have died and caused those things and for those who remain and are still affected by them.

Difficult stuff to be sure.  But important work for all of us to enter into.  To let God enter into our pain – our pains of loss, of sadness, of mourning… To let God renew our faith and trust in His promises so that we truly believe that our loved ones are in the hand of God and no torment shall touch them.  To pray for those who have died who perhaps aren’t loved ones  – to us or anyone else… that the loving sacrifice Jesus offered for the salvation of the world is theirs and ours.