Just hearing his name, people have immediate thoughts. Some will think of him as the “saint who loved animals”; while others may cite the “Make me a channel of your peace” prayer attributed to him (which, spoiler alert – although in it’s tone and message is very “Franciscan” it wasn’t written by Francis)

I remember the “Blessing of Animals” and sang that hymn at Mass many times growing up, and I’m sure those gentle images of Francis are what made him such a beloved example of a “saint” to me growing up – and are most definitely why his popularity continues to soar centuries since his death from people of all (or even no) faith.

It wasn’t until I was in the Seminary, attending a retreat that was based on St. Bonaventure’s “Life of Francis” that I developed a great love, a deep admiration that was so strong I started to pray and discern whether the Lord might be calling me not just to the Priesthood, but to be a Franciscan priest. And one of the profound things that came from that retreat was realizing that all those admirable qualities that we so often attribute to him don’t even skim the surface of St. Francis.

Quite simply, this man had a radical encounter with Jesus Christ… He so clearly heard God’s voice, that when he did, he answered him.

For example, he knew that God was prompting him to care for the poor. This one day he would encounter a leper on his path as he was returning home (at the Lord’s direction) and his gut, his impulse was one of “horror.” But that call of Christ to truly die to self - to move past that revulsion and instead see and love Christ before him in the leper compelled him to stop his horse on that plain, get down and run and kiss the man – giving him his alms and his affection. As he mounted his horse to continue his journey, he looked around at all the open plains around him – and it was completely clear.. The leper couldn’t be seen anywhere.

That experience – miraculous, mysterious – that encounter with Jesus Christ captured Francis’ heart. And so he would renounce everything to follow Christ. And when he Christ called out to him from a cross found in a dilapidated church to “Rebuild my Church which has fallen into disrepair” – he with a single-minded focus simply started picking up rocks and rebuilding the physical structure. And as he kept working, he began to realize – OOOHHH – not just this Church – not this Physical building – but THE CHURCH – the humble man, the “Poverello” of Assisi did – because He Loved Jesus and Loved Jesus’ Church. And he wanted to repair the damages that caused and came from The Protestant Reformation. 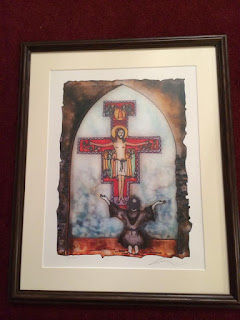 What draws me to Francis, what’s made me love him is his Love of Christ, his Love of the Catholic Church.
It’s his imitation of Christ.
It’s the somewhat spontaneous responses he makes.
It’s the struggles he had to make those responses.
It’s his mistakes and willingness to learn from them.
It’s that relentless pursuit of Christ and how Jesus was calling Him throughout his ministry.
It’s his simplicity in living on this earth.
It’s his depth of desire for the transcendent.
It’s his utter devotion to the Blessed Sacrament.
It’s his immense humility.
It’s his brutal honesty.
It’s his ability to see Christ all around while at the same time his humanity which at times frustrated him with those around him he found it more consoling to preach to the animals (where his “love of the animals” came from – they were often more receptive audiences)

While I never did end up in one of those many orders, I still consider myself a friend of Francis’ who I pray will continue to pray for me… encourage me to live up to his words as a Priest of Jesus Christ “now that we have left the world, we have nothing else to do except to follow the will of the Lord and to please Him.”

WHAT GOD WANTS TO CONCEIVE…

THE IMPORTANCE OF REMEMBERING