Latest News
Home /Blog/TO STAND, TO KNEEL, TO BE OF ONE MIND

Hi everyone, here’s my homily for OCTOBER 1, 2017  the 26th Sunday in Ordinary Time.  Today’s readings can be found at: http://www.usccb.org/bible/readings/100117.cfm .  Thanks as always for reading, sharing this on Facebook, twitter or reddit – and for your feedback and comments… Have a great week and God Bless – Fr Jim 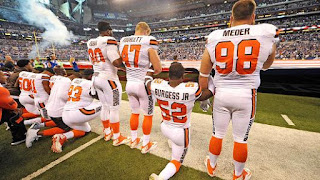 HOMILY:
I was talking with a priest friend a couple of nights ago and at one point we were discussing homily ideas we were both throwing around for this weekend. That’s when he said to me “the last thing I would ever want to go near this week is the NFL – National anthem controversy.” I appreciated his reluctance… but it seems hard to ignore. Whether or not this deserves this amount of time, energy, attention, discussion that it has really isn’t the point now. With the extent of coverage on this controversy, I would think even those who have no interest in football at all have heard something about this issue and probably have an opinion on the matter.

One athlete’s decision about a year ago to take a knee (rather than the traditional standing at attention) during the playing of the national anthem before a football game as a protest of what he felt were wrongdoings against African- Americans and minorities in the United States – has now evolved into a national debate. Teams and players are being forced to take sides, make their opinions known on different positions on even more controversial issues that have popped up… which seems to embroil people into even more passionate arguments. The focus on the games themselves seem to be an afterthought as people tune in to see “will they or won’t they” stand. And if they don’t – what will they do? Will they not take the field like the Pittsburg Steelers last week? Will they lock arms as a sign of unity? Will they kneel before the anthem and then stand?

I found myself getting drawn into the various arguments and debate about all of this as I’m sure many of you did as well. A couple of friends of mine started going at this issue online with each other. One thing I’ve always advised students is to never post something on facebook that you wouldn’t say to someone’s face. Well reading some of the exchanges back and forth, I could actually hear those words being said to each other. These guys have always liked to be loud and obnoxious… and enjoy going at each other. But the tone got angrier and more personal. The language started getting more rough. And by the end they had basically unfriended each other. Perhaps not just on facebook. 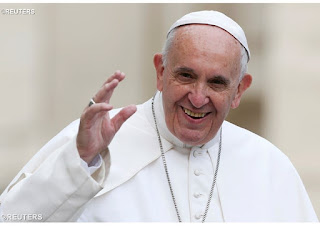 We seem to hear, see, maybe even experience that type of thing more often about more than one issue. Yeah I could just say the name of certain political leaders as an example – but that’s too easy. I’ll give you one that kind of startled me – Last week a student stopped me after a talk I had given and said “I’m not Catholic but I’m curious because you seem to like Pope Francis – but it seems to me like a lot of Catholics have very, very different opinions on him. Like some Catholics don’t really like him” That really bothered me. I understand some of the things that have been considered “controversial” with Pope Francis but I have great love and respect for him as our holy father. That some of the “debates” about different things the Pope has said or done has caught this young man’s attention and left this impression that there’s extremes of belief about the Pope within the Church really took me aback.

Division. There’s this seemingly growing chasm between people in a growing number of areas that at least to me seems new… different… and incredibly dangerous. All these different but similar incidents stayed with me praying with these scriptures. Usually when I look at the readings for Sunday I gravitate primarily towards the Gospel, but this week, I found myself reading over and over this second reading from Saint Paul to this Church in this ancient Greek city of Philippi. Paul had peached the Gospel of Jesus Christ to the Philippians and they had received it so eagerly and gratefully that Paul had considered them close friends. One of the reasons this selection is important is that it contains one of the oldest hymns that the members of the Early Church must have sung about Christ that it is considered almost one the earliest creeds. But for me the section that hit me was the introduction to that hymn. It almost has this tone where Paul is pleading to the people he cares so much for. Listen again:

If there is any encouragement in Christ,

any solace in love,

any participation in the Spirit,

any compassion and mercy,

complete my joy by being of the same mind, with the same love,

united in heart, thinking one thing.

Do nothing out of selfishness or out of vainglory;

rather, humbly regard others as more important than yourselves,

each looking out not for his own interests,

but also for those of others.

Have in you the same attitude

that is also in Christ Jesus…

I kept thinking about all the different areas of division that we’re surrounded with or are arguing over in our day and age and kept coming back to Paul’s begging his fellow Christians on the need for being of the same mind, with the same love, united in heart, thinking one thing. That one thing has to be Jesus Christ. We have to be looking to His example. We have to be trying to imitate His example (as hard as that might be). We have to be doing that both within the Church and outside these walls. That doesn’t mean there will never be disagreements, debates or arguments, but it does mean we have to at least try to start with the appreciation of what it means to be brothers and sisters.

As brothers and sisters, we have to pause in the midst of heated rhetoric and divisive language and attitudes and ask ourselves questions that take the other into consideration:

Can we as Christians be of the same mind that racism is hateful – is sinful?

Can we be united in heart to want to be attentive to those who are suffering – and not put that up as a competition to say one person’s suffering is worse than another?

Can we put on the mind and heart of Christ Jesus and put others as more important than ourselves before we post that next snarky comment to someone?

All of this is difficult.  As a priest, I try to always keep in mind the fact that we’re all sinful people, myself included… and how hard it can be even to listen to one another – especially when people are coming from two very different perspectives. I know how challenging this is as I minister to minorities who talk about their fears and their angers. While at the same time I count police officers as some of my closest friends and know of the dangers they face in what is becoming an even more thankless job. But we can rip each other apart in our pain.  ‘You hurt me.  You hurt him.  He hurt her.  She hurt us.’ The list of injuries and insults, of neglect and hatred and abuse can escalate, can go on forever and ever until no one is justified, no one is sanctified by the forgiveness Christ died to leave us with.

With a well-informed conscience and guided by the Holy Spirit, we must do what we believe to be right, not only avoiding evil but doing our best to minimize its impact on our world.  And while that may be done with zeal, it first must be done with kindness.  With compassion.  With genuine caring for the other – for their pain as well as for their person – before we can hope to bring Christ into this world and, as Paul says, complete our joy.