Hi everyone, here’s my homily for SEPTEMBER 10, 2017 – 23rd SUNDAY IN ORDINARY TIME.  The readings for today can be found at:  http://usccb.org/bible/readings/091017.cfm .  Thanks as always for reading this blog; sharing it on your social media (Facebook, Twitter, Reddit); and your comments and feedback.  Have a great week & God Bless – Fr Jim 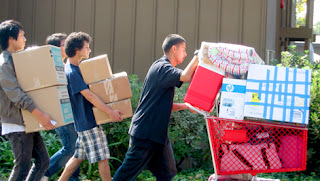 A week ago, the freshmen arrived at Montclair State University, the campus I’m blessed to serve at as their Chaplain. Seeing the students arriving at the dorms on Sunday, it was hard for me to believe that it was 26 years ago I first left my home in Clark NJ to drive out to DeSales University. Watching all of them, wading through the terrible rain and traffic I couldn’t help but think of all the nerve-wracking, challenging things I faced moving away from home and leaving the safety of my loving parents. The scariest part for me was meeting my roommate.    Mind you – this was before Facebook (even before Myspace… even before Email)   So the only information I had about the guy was getting a card in the mail that had his name, address and phone number and having had a few phone conversations with him over the summer.

He sounded like a decent guy. We joked about different sports teams… He was from an Italian family too, so it seemed like we would get along.  But by move-in day, I was a nervous wreck … arriving on campus, getting to the dorm, finding the room, walking in and meeting the guy for the first time who I was going to be rooming with for the next year.  There were so many fears. What if we didn’t get along? What if he was weird? The cliche goes you never really know someone until you live with them. I wasn’t sure at that point if I really wanted to know him.

But things seemed to start on a good note. We both tried those first days to be understanding of one another:  “You want that bed? Sure… that’s fine…” “We’re only allowed one refrigerator in the room – let’s buy one and split the cost.”  We tried to work around each other’s air conditioner needs, music preferences, shower schedules. Things seemed to be going okay. It wasn’t perfect, but I was relieved he wasn’t a mass murderer on the run. And part of the whole thing about living away, I was told, was learning how to deal with someone elses quirks…

For example, Chris liked to go to bed early. By early I mean 10 PM lights out.  It was true, we both had early morning classes – we had the typical, terrible Freshmen schedule – meaning we were stuck with 8 AM classes 5 days a week.  But there was no way I was ready to go to bed that early – even if it was good for me.  I was living the dream – no Mom and Dad telling me to get to bed at 11, and instead hanging out; going to the Diner at midnight for a nutritious snack like cheese-fries and gravy (as a 43 year old I shudder to think about attempting to do that now… nor do I want to talk about the 30lbs I gained that year)

Anyway, I would leave my room by 9:45 pm every night and hang out somewhere else till I was ready to go to bed; then fumble my way around the room whenever I would get back in darkness; try to get in and out of the bathroom (which was near his bed) without making any noise.

A few weeks into the semester, I came in around 12:30. I was tiptoeing, using the sink (which was in our rooms) in the dark and all of a sudden I hear Chris just start cussing at me as he turned over in his bed. (Which obviously I can’t repeat what he said here)  I think I said “excuse me?” (Something like that) and he mumbled a few more choice words as he turned again and then seemingly went back to sleep.

I was ticked.  I mean really perturbed.  I was so angry that I stormed out of the room (slamming the door of course) and went down to one of the lounges and stewed for awhile.  Barely got any sleep that night. Next day, I got up, and took off for breakfast without Chris, thinking “that’ll show him that he can’t treat me that way.” I huddled with my friends and unleashed to them about what happened to me as I said:   “The guy’s a lunatic – he thinks we’re in West Point and that it’s got to be 10 pm lights out … no exceptions.”  To justify my anger and play the total victim role further, I added   “Here I’ve been trying to be respectful of the guy and all and what does he do? He cusses me out for brushing my teeth?  Is he for real?”  Of course my friends – being the good friends that they were – totally supported me. They  probably threw a few more “dura-flame logs” onto a blazing fire – reminding me of other things that annoyed me about Chris – so now I got more and more ticked off.  So for the next couple of days I kept my distance.  I knew what his class schedule was so I was able to avoid him, dodge him and blew him off a few times at meals for at least three days.

By Thursday afternoon, we both happened to be in the room at the same time and he said to me “Jim are you angry about something… did I do something?”  I was almost stunned by his arrogance even asking the question and I just let him have it – “Do something! Are you for real? Yeah you can say that… you rip into me because I happened to wake you up Sunday night, you cursed me out… and you wonder why I’m ticked?”  At this he’s literally staring at me with this look of genuine confusion which, after what seemed to be a minute of silence, he just kind of chuckled… as he shared, “Oh… I guess I forgot to tell you that sometimes I talk in my sleep.”

He had zero recollection of the whole incident.  Didn’t even hear me when I stormed out and slammed the door that night. Yeah.  I’m still embarrassed when I think about this whole episode. I felt like the biggest idiot in the world.  Not because this was my first time in 17 years of life that I had encountered someone who talked in their sleep (the worst I had dealt with was sharing a room with one of my brothers who would snore) I felt like an idiot because I had treated the guy like crap all week and bashed him to anyone who would listen. I was ticked off and wanted my friends to agree with me. I wanted revenge for my mistreatment. Even retelling this story now some 26 years later I feel ashamed. And sadly, even though we both laughed it off that night, there was still carnage on our friendship to the point that by the end of the semester, we switched roommates. 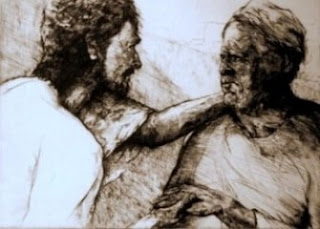 “If your brother sins against you, go and tell him his fault between you and him alone…” This advice Jesus offers in tonight’s Gospel is so seemingly simple, it’s common sense logic to listen to when we are sitting here as mere listeners to his words being proclaimed.  But when any of us think about the various incidents, faults, sins we’ve experienced from our roommate, our relatives, our friends, it’s a lot harder not to succumb to being outraged, angry and give into the drama.  Especially in this Facebook age.  I can’t tell you how many statuses I see flash by that are really berating someone – sometimes they’re named, but often times they’re not. Where someone will post something like “really sick of some people who all they do is take people for granted” – followed by a slew of “likes” and comments agreeing how such people stink…  We seem always ready to jump on the bandwagon against someone else. Probably because we think it’s just easier to get it off their chest in this way rather than possibly have to confront someone over something and possibly end up in a fight.

But Jesus thinks otherwise. Why?  Aren’t their bigger things to worry about?  Quite simply, He is telling us that if good is going to conquer evil; if love is going to conquer hatred in our day, in our age, in our lives – it has to start on the most basic, immediate level.  It has to start in our own hearts.  Sure we can look at all kinds of horrific things that are going on around our country or around the world – but what Jesus is trying to make us see is that each and everyone of us has to deal with the horrific things going on in our own worlds: the angers, the resentments, the hatreds that are there inside of our hearts and minds.

We have to get a handle on them and allow the Holy Spirit to direct us.  If we can think of someone right now we’ve labeled our enemy – it wasn’t just one day they did one thing that just set us off.  More than likely there were a lot of little things that preceded it, that maybe went unchallenged, undiscussed.  We kept them filed in our mind (dates, times, occurrences). Those things started to build up to the point that ultimately something happened … a button was pushed and the file drawer flew open and all the evidence of that person’s wrongs against us came to the forefront of our mind. We were prepared for battle like a lawyer. We were going to completely trash this person and dismiss them. 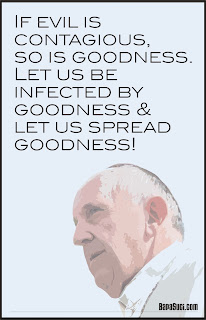 Jesus’ point is that if we can come to that place of hatred and dismissal of one another on such a personal, “local” level – than how much easier is it for that to happen on a greater level?  Racial tensions; religious divisions; wars; intolerance – we can see on much grander scales what happens when collective anger festers and is shared. The opposite is true as well. If we can take those first steps to heal whatever rifts and angers we’ve experienced now and in the manner Christ has said; if we experience that reconciliation and share the joy that comes from that healing on a collective level then we begin to live the Gospel and not merely listen to it being proclaimed.

Pope Francis put it like this:  If evil is contagious… well then, so is goodness. Let us be infected by goodness and let us spread the good contagion. Yes it’s probably easier to stew… to be angry… to share that and bash those who’ve hurt us. But that’s also how a brother (or sister) becomes an enemy. Jesus is calling us to set ourselves free from the prison of bitterness. A prison we put ourselves in by building walls and bars of anger. Breaking free with the power of reconciliation and forgiveness is possible. If we take those steps of faith, then we are truly being a Church because then we genuinely gather in Jesus name and experience his presence in the midst of us.