Latest News
Home /Blog/DEPART FROM ME, A SINFUL MAN…

While the crowd was pressing in on Jesus and listening to the word of God,                                                he was standing by the Lake of Gennesaret.He saw two boats there alongside the lake;
the fishermen had disembarked and were washing their nets.
Getting into one of the boats, the one belonging to Simon,
he asked him to put out a short distance from the shore.
Then he sat down and taught the crowds from the boat.
After he had finished speaking, he said to Simon,
“Put out into deep water and lower your nets for a catch.”
Simon said in reply,
“Master, we have worked hard all night and have caught nothing,
but at your command I will lower the nets.”

When they had done this, they caught a great number of fish
and their nets were tearing.
They signaled to their partners in the other boat
to come to help them.
They came and filled both boats
so that the boats were in danger of sinking.

When Simon Peter saw this, he fell at the knees of Jesus and said,
“Depart from me, Lord, for I am a sinful man.”
For astonishment at the catch of fish they had made seized him
and all those with him,
and likewise James and John, the sons of Zebedee,
who were partners of Simon.
Jesus said to Simon, “Do not be afraid;
from now on you will be catching men.”
When they brought their boats to the shore,
they left everything and followed him. 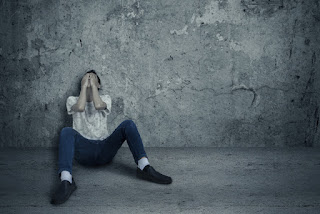 HOMILY
So often when writing a homily, it takes me awhile to see something (or rather hear something) that the Lord is trying to underline or point out for me. But a Gospel story like this is quite the opposite. There’s almost too many things that stand out… too many beautiful lines.

But to keep this limited, I’ll tell you the line that resonates so personally for me: Depart from me, Lord, for I am a sinful man.

When St. Peter utters those words – he’s a man who’s exhausted… who’s frustrated… with his efforts that seem to be useless (both in fishing and discipling) – with his fellow disciples – perhaps even with Jesus himself. He’s trying to follow the Lord. He’s trying desperately to be a good leader. He’s trying to fulfill his responsibilities as a fishermen. The stress starts to catch up to him.

As the hours passed by, as he realized they weren’t catching anything – the panic starts to set in – how would he pay for his bills, his needs… How would he get by and make ends meet. He’s probably at his breaking point – when who shows up – Jesus who invites him to go back out. The fact that Peter’s response to the miraculous catch was “I am a sinful man” gives us an idea of what probably went through his mind when Jesus said that to him. Maybe it was something like “Oh For the Love of God” (as it turns out pun intended) He does go out.

One of the reasons I love St Peter is that he reminds me, – who is all too well aware of his own sins, failures, screw ups; who can get caught up in my own frustrations and allow stress and worry to overwhelm me – that Jesus called and chose me as an imperfect broken man that He wants to use. But it is up to me to allow him too. He’s never going to force himself or intrude or manipulate me. Because Jesus loves me, it has to be a sincere and loving decision on my part to allow him to lead me. And so sometimes I just cant get there until I’m broken, exhausted and Jesus looks at me and says – are you done? Ok then, let’s go back again and try again…

My – much – younger friends… one thing that troubles me so much working with your age group is the despair, the discouragement that plagues your generation which often leads to apathy. Where the evil one has convinced so many of you there’s no way Jesus could be calling me, ever want to use me… “I’m too (fill in the blank with whatever terrible put down you have for yourself)” I struggle with sin X” (or I don’t even struggle with it… I give into it way too often) Where you somehow allow those things to not only undermine your confidence in God’s plans for you – you almost don’t even imagine that as a possibility. I’ve seen that in guys and women I’ve spoken to about the call to priesthood ore religious life – I’ve heard it in students as they encounter these different forks in the road on what they are going to do with their friends – or in their classes – or after college… Somehow there’s a blockage there.

Tonight – as we enter into this Holy Hour – maybe you can just let Jesus look on you with that love. To feel that acceptance – that joy that He has in you being you – and you choosing to be here with Him…

If those lies you’ve told yourself about yourself are too painful – if the sins you’ve committed are weighing you down – then I’ll be happy to celebrate the Sacrament of Reconciliation with you.