Hi everyone, here’s my homily for September 3, 2017 – the 22nd Sunday in Ordinary Time – The readings for today can be found at: http://usccb.org/bible/readings/090317.cfm  Thanks as always for reading this blog; sharing it on Facebook, Twitter and Reddit; and your comments and feedback.  Appreciate it!  Have a great week – God Bless, Fr Jim 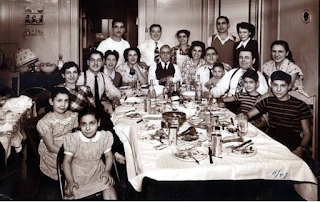 HOMILY:
Growing up Italian, one of our most sacred of traditions was Sunday dinner. My mother has continued to make the most valiant attempts to gather us all together as family for this utmost important event, but sadly, it has gotten more and more difficult over the years. We still gather together as a family for a Sunday dinner, but maybe only once a month … usually to celebrate someone’s birthday or a holiday. But I gotta give my Mom credit – she still tries really hard to get all of us to break away from our crazy, non-stop schedules of work, chores, and other commitments that we try to slip in on the weekends, and get us to come together more regularly. She’ll put out feelers to see if she can find a day we’re all available, then mix in some Italian guilt in here and there, and even bribe us with making one of our favorite meals.

One Sunday, about 15 years ago comes to mind. I was a parish priest at the time, and between the four different Masses, I had run up to my room for a few minutes and saw that my answering machine light was blinking. It was my Mom saying “Hi Honey – I just wanted to see if you had nothing going on this afternoon. I’m making lasagna.” My ears perked up…Lasagna – really? Wow – I mean, even though I don’t know how to cook, I do know that’s like a really, really big deal. There’s so many intricate steps. It’s so much more work – you have to boil the noodles, then you lay them out on these big trays as you try to pour the layers of cheese and meat and keep stacking them – which is a real pain to do since the noodles are wet and soft and slippery. I was really surprised that late on a Sunday morning that this was been the first I heard of this.

So I called her back and said “You’re making lasagna, really?” She said “Yes, I just had a taste for it, so I decided to make it.” I asked her if my brothers were coming and she said – “No, it’s just your father and I – can you make it?” Quickly I looked at my appointment book: “Well I have a baptism after Mass, and I have a wake to attend, but I can go to the wake tonight instead of this afternoon, so I probably can swing it.” She said “Good! I’ll see you then.”

The rest of the morning, I was eagerly anticipating Mom’s homemade lasagna… even tasting it as I drove home. As we sat down, Mom was already pushing meatballs and bread on me – which I was kind of dodging as I didn’t want to get full even before she took this tray of lasagna out of the oven.

I said it again that I was surprised she had made it just for the three of us (and I wasn’t even a guarantee to attend till that morning) and Mom just dismissed it saying “Well, you can take a plate home and I can freeze and save some for your brothers…” Then she brought the tray out, took the aluminum foil off the top. I took a look and just blurted out – “What’s that?” Somewhat defensively (which I guess after blurting out a question like that) Mom very simply responded “Lasagna” – “But – What happened to it?” (At which point my Father is trying to stop himself from laughing and is shaking at the end of the table) My mother, now holding a knife in her hand just said “Nothing…nothing happened to it” “But why does it look like that?” It kind of looked like someone had deflated a regular lasagna – like it was a flat tire… Angrily slicing it and serving it, she said “Just shut up and eat it…it’s good – just try it” – “Come on Mom… how could it be good, when it looks like… well, I don’t know what it looks like, but it doesn’t look like your lasagna – what happened?” Still denying there was anything wrong or different about it, I got up and went over to the garbage – which she tried to block me from doing… As I opened it, I found an empty box of what was labeled “No boil lasagna” – “I KNEW IT” – “Just try it” she argued… which I did. I said “Mom – if I were making this, that would be one thing. That would be a massive feat for me to put these things together and make this thing… but 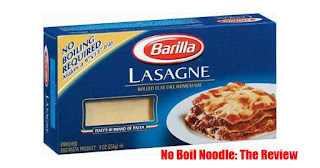 there’s no way this is anywhere near as good what you normally make.”

To this day – she will not admit I was right. But a few weeks after this terrible incident, she made the real lasagna. When I said “See, I mean, come on, I know it’s a pain to make, but tell me you don’t see the difference” she simply told me to “just shut up and eat it.” But she knows the truth- 15 years later she’s never made the no-boil lasagna again. As much as I probably sounded like a brat (at least that’s what my mother called me that day) the reason we could have that honest of a conversation and be that brutally honest is because of the depth of love. My mother is a phenomenal cook and knows how much I love her that even my rudeness (and accuracy) could be quickly forgiven.

If it’s just some random person who offers that unsolicited estimation we might be more dismissive “Who asked you, Jerk???” But if it comes from a parent, a teacher, a coach, or perhaps a really good friend – that’s quite a different thing, isn’t it? In those instances, we realize it’s coming from someone who cares about us, who knows us, and probably knows – we’re capable of much more than whatever it is we’ve offered.

When we hear Jesus basically calling St. Peter “Satan” in today’s Gospel, that sounds like a pretty awful put down. There’s literally nothing worse someone could call someone else. Even the most diabolic of figures in history are often compared to him or assumed to be heading to or residing in Satan’s abode – Hell. And it seems even more shocking coming after what we heard just a week ago. The sentences right before this Gospel passage was the conversation where Peter responds to Jesus question “Who do you say I am?” with “You are the Christ, the Son of the Living God.” In that moment of testimony, Jesus exclaims “Blessed are you Simon Peter! For flesh and blood have not revealed this to you, but my heavenly Father! You are Peter, and upon this rock I will build my Church” (Matthew 5: 18) Now just mere moments later – this”blessed” rock is being called “Satan.”

And my Mom thought putting down her lasagna was bad…
The thing that struck me though is that Jesus had to have loved Peter and Peter had to have loved Jesus in order for Jesus to be that brutally truthful…laying down some “tough love”calling him to greater holiness, sharing with him his greater expectations, even in a way trying to foreshadow for Peter that not only will Jesus himself suffer and die a terrible death – so would Peter. 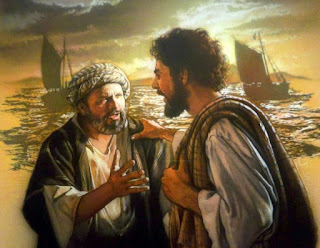 Jesus is making it abundantly clear that being the rock, the “foundation” Jesus was building his Church upon wasn’t going to be a position of honor or prestige, but one of selfless, sacrificial service. In throwing out “get behind me Satan” Jesus is purposely being dramatic to illustrate just how crucially important it is that Peter – who he thinks so highly of, who he has such great hopes for and sees such great potential for -that he truly understand the implications in being this rock, being this foundation, being the first Pope. Scripture doesn’t capture for us Peter’s initial reaction – was he stunned? was he hurt? Was he confused? Was he disappointed in himself? We can only speculate. But obviously this encounter was memorable for it to have been recorded. And knowing the rest of the story, that Peter would still falter, and struggle throughout his ministry tells us that these types of correction while humbling (embarrassing even) didn’t destroy him. Peter wanted to be all that Jesus imagined him to be. Peter doesn’t lose sight of the love Jesus has for him with this fraternal correction.

How about us? We know all too well how difficult, how challenging it is to follow Jesus Christ, follow his teachings ourselves. We struggle, we’re tempted, we fail and fall. Sometimes multiple times a day (an hour?) But hopefully what makes it possible for us to dare to come before the Lord here each Sunday for Mass is that in spite of those struggles and failures, we have experienced, we’ve come to know and believe in the immense love and mercy of God for us. We can’t forget that we’re one confession away from being washed completely clean of all our sins. As Pope Francis has said repeatedly “God never tires of forgiving us, it is we who get tired of asking for forgiveness.” Jesus casting his light into our darkness isn’t meant to hurt or embarrass us. It’s the complete opposite.
Jesus is telling us we’re worth the time, worth the concern… He knows us, knows how capable we are – the potential we hold. He knows we can do better. And will not give up on us in pursuing us and calling us into deeper relationship with him. Are we experiencing that deep relationship with Jesus where we know he has the best for us in mind? If we’re not, we’re challenged to seek that kind of closeness with him. He will always give us his best, and he wants our best for him. May we never lose sight that these corrections we experience are being offered in love. May we never forget that essential point in offering “Gospel corrections” to those we meet.