Hi everyone… here’s my homily from Mass for Friday of the 20th Week in Ordinary Time – August 25, 2017.  The readings for today can be found at: http://usccb.org/bible/readings/082517.cfm .  Thanks for reading, sharing and your feedback and comments – Fr Jim 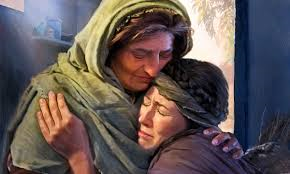 Homily:
I’ve never seen the film – but reading these scriptures today, the title comes to mind: Do the Right Thing…

This first reading -from the Book of Ruth… is such a short passage that packs a lot of information in a few short verses. Unlike a work of fiction which would paint a mental picture for the readers about the story we’re hearing, we get just a few details:

There’s a famine,
this family departs the land of famine,
the Husband dies leaving Naomi a widow with two sons,
these two sons get married
and within 10 years, they both die as well.
And Naomi is left alone.

It’s all reported somewhat matter of factly here. But try to imagine, try to put yourself in her shoes. Having experienced losses and seen loved ones suffer – I can’t even begin to imagine the sense of loss that Naomi was left with. Her remaining family are these two women, two daughter’s in laws. As such, their responsibility, their attachment to her would be even more detached then than they would be today. The one daughter in law kisses Naomi goodbye – and Naomi tells the other one – Ruth – she should go as well. Legally, culturally, there was no reason or even expectation for her to stay.

But Ruth – does the right thing –

Do not ask me to abandon or forsake you!
For wherever you go, I will go, wherever you lodge I will lodge,
your people shall be my people, and your God my God.”
The reason this story is so revered for us as Christians is that we see a shift in Jewish understanding of love, of responsibility… of what the commandments mean. That they’re not meant to simply be “thou shalt nots” – but a recognition of God’s steadfast love for His people, and our responding in kind. Ruth has seen in Naomi a selflessness, a faith and trust that the God of Abraham will provide despite overwhelming evidence that points to the contrary. And that has attracted Ruth to love her mother in law, and God.

Which is why Jesus in the Gospel won’t allow himself to get pigeonholed into a theological debate among religious scholars asking which is the most important law, in presenting a hierarchy of things -picking and chosing not simply one out of the 10, but the hundreds of laws found in the scriptures and Jewish tradition. A choice that would reveal more about the person speaking’s agendas and priorities more than God.

By cutting to the core, the heart of all the laws, all the commandments – calling us to Love God with all our heart, all our souls, all our minds – and our neighbors as ourselves – we are guided into a much broader, complex expectation than a litigious, legalistic approach would have held. The exception that was found in Naomi and Ruth’s example in the Old Testament becomes the expectation of you and I, who are bound by the New Testament. Or in other words, when we allow our love for God, our love for one another to be the norm, then we too Do the Right Thing…