Latest News
Home /Blog/PRAY FOR CHARLIE GARD… AND OURSELVES 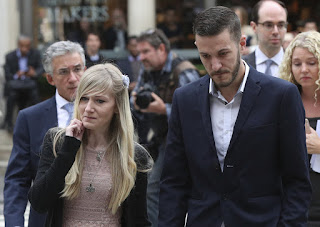 I just finished reading the latest on what has become an international story. Charlie Gard – the small, ill boy in the United Kingdom; who’s parents desperately were trying to find any treatment that could possibly save their son – they’ve been desperately arguing against those in their government authority who made the determination that there wasn’t anything left that could be done for little Charlie.

I’m not going to pretend that I know the ins and outs of this rare, genetic condition that causes brain damage that little Charlie has been suffering from. Nor will I presume that everything I’ve heard or read in the news or from people’s social media sites has given me an accurate picture of what the disease was or what the odds were for this experimental treatment to be successful. Today, young Charlie’s parents have dropped their court case in the UK basically conceding that there’s no longer hope that Charlie will recover. One of the story lines that has emerged that the UK’s dragging it’s feet on this case, forcing the parents to beg, and sue, and appeal on behalf of their son has made it less possible then ever that anything could be done for Charlie. Again, I don’t know if that’s true or not.

What’s sickening and frightening to me is that story line is even a viable possibility. In the not so distant past, there was this common held belief that Life was seen as the ultimate good… the thing that we fight for, protect, support, encourage.
– Yes there were wars – but others joined in those wars to end the carnage… and we revered the lives of those who made the ultimate sacrifice…
– Yes there were murders and crimes… but people were horrified and outraged by those occurrences.
– Yes there were sicknesses and diseases… but everyone rallied, from the doctors, to the families, to well wishers – moving heaven and earth to try to address those illnesses… particularly when it was an infant.

Because Life was the supreme good. It was the thing we all shared in common – whatever race, gender, belief, class you came from… We all share this precious; irreplaceable; what many of us believe is God-given, but we can all agree is – this beautifully mysterious gift of Life. I can recall hearing cases where someone’s religious beliefs prevented medical care of a sick child going against the “Freedom of religion” argument and forcing the parents to provide the medical care because it was that important. Life was seen as more important than religious beliefs. Or at least – we realized we needed to be alive in order to fight that fight another day.

Never did I imagine a day where you would have parents, who had found medical practitioners willing to try something – coupled with the financial resources necessary to attempt this – being forced to beg the government to let them try to save the life of their child. That in itself has left me feeling a bit sickened… somewhat frightened… and definitely saddened. And so as I pray for Charlie Gard, and his devastated parents and family members… I also feel the desperate need to pray for ourselves to, who seem to have lost a sense of the preciousness of life.