For those who claim the only thing I post on here is my Sunday homilies… well, here you go… something different… 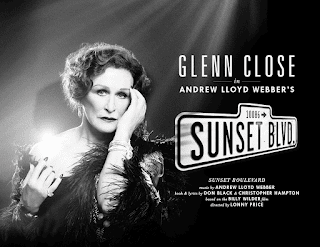 “Hey Father Jim… I didn’t know you’re a ‘theatre geek.’” Nice start to a conversation on Facebook from a “friend”. I wrote back and said “Haha – well, I don’t know if I fall into that category or not… I rarely get to theatre (embarrassingly, I’ve not even made it to the shows our students are in on campus)” I can tell you how I fell asleep during “The King and I”; “Cats”; “Urinetown” and “Rent” with friends or family members over the years. Most of what’s on Broadway I don’t have the slightest of interest in (someone asked if I wanted to see “Hello Dolly” which is the hottest ticket in NY right now and I said I sincerely have zero interest in it, despite the hype). So I don’t really consider myself a huge fan of all theater. For me, I really have to care about the story and get swept up into the music to enjoy a theater outing.

The response was “Well what’s the deal with Sunset Boulevard” and then went on to talk about how Lino Rulli (the host of The Catholic Guy show on Sirius/XM, whose show I’m a part of every Thursday and Friday) had talked about how I had suggested that he and his wife go to see Sunset on the air.

Ah… Sunset Boulevard… well that’s a different thing all together.

It is true, I’ve been encouraging probably everyone I know to go see it before it closes on June 25th. Sunset Boulevard remains my all-time favorite musicals. I saw the original production in the mid 1990’s more times than I’ve seen anything else on Broadway. In this revival, which opened in February for a limited run till June 25th, the score has never sounded more lavish with an orchestra of over 40 musicians right on stage (which is the largest orchestra ever on a Broadway stage in over 50 years). From the first notes of the Overture to the instrumental postlude that takes place during the final bows at the end of the show, there’s over two hours of just incredibly moving music from the legendary Andrew Lloyd Webber (who wrote the scores of Phantom of the Opera, Jesus Christ Superstar, Evita) In 20+ years, there’s rarely a week that’s gone by that I at some point don’t listen to something from Sunset Boulevard I love the music that much. At this point I’ve heard it enough that I can even hear the differences in the orchestrations (which is why I’ve been hoping they’ll make a new recording of this revival).

For those who aren’t familiar with the story – which was first a legendary film considered by many to be an all time classic: 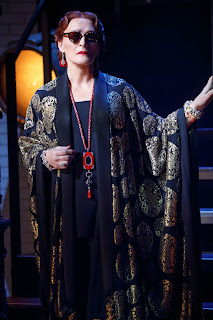 Norma Desmond, is, according to her devoted servant butler Max “the greatest star of all” – having been one of the leading film actresses in Hollywood when movies were first being made and the films were silent (films with sound would take some time to be invented… so initially the films were silent or in some cases, a live pianist playing at the movie theaters during a screening). It’s actually true that with the advent of “talking pictures” (talkies) a great number of actors and actresses were cast aside for one reason or another… including the fictitious Norma Desmond. In this story, Joe Gillis is an unemployed writer who can’t get a job at any studio, is running out of money. He stumbles into Norma’s home, and eventually into her life in a bid to ditch the men who were trying to repossess his car. Very quickly he sees that Norma is delusional – believing that millions of eager fans are desperate for her to “return” to the screen… something that has been enabled by Max sending phony fan mail to her every day. She remains captive to her delusions – sitting home watching her old silent films, reliving her glory days – and convincing herself that her self-written script for the famous Cecil B. DeMille to direct will resurrect her career (A film which she intends to be a silent film based on the character Salome from the Bible who asks for the head of John the Baptist)

What’s fascinating to me was seeing how all of these characters are living in fantasy worlds… desperate for attention, for fame. All of these characters have been used by others and then return in kind to use others. Norma by movie studios, and even fans who idolized her and then cast that idol aside in favor of new ones… ignoring that there’s a person – as fragile and as vulnerable as any one of us there. Norma turns around and uses Joe to help breath new life into her fantasy world (and Joe in turn uses her, seeing how delusional she is and sensing an opportunity to make a quick buck off the lady). Max seems obsessed with this “idol” of Norma and sacrifices his life to keep this illusion alive. 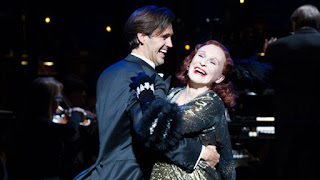 Why is this story so compelling to me that I’ve seen this revival twice (and am itching to go to at least once more before it closes in a few weeks)? It seems such a dated tale. But towards the end of Act II, Joe sings “the world is full of Joe’s and Norma’s” and for some reason, when I saw this revival and heard that line (after the amazing performances by Glenn Close, Michael Xavier, Fred Johanson and Siobhan Dillon, who made the story much more vulnerable, human and even relatable than the original) Sunset Boulevard not only made sense but even seemed more relevant to me in this day and age we’re living in.

Because it’s not just celebrities… athletes… politicians… who with our help have the potential of becoming “Joe’s” and “Norma’s.” With our Facebook-Twitter-Instagram-Snapchat obsessed world – we too find ourselves at risk. We’re being told we can “broadcast yourself” by You-tube. We share our very lives on multiple platforms hoping for “friends” “followers” “fans” to like and share what we offer. Countless studies are being offered talking about the psychological risks and damage that’s been done in our social-media obsessed culture.

Perhaps that’s why I found this revival so moving. Having worked with so many students over the last few years and seeing some who’ve really been beaten up by seemingly anonymous folks out there in the dark on their screens – I couldn’t help but feel for these characters who are both perpetrators and victims of their own demise in which in the end, Norma will lose her mind; Joe will lose his life and Max will lose his reason for being. Hopefully leaving the theatre, you not only are thankful this is a fictitious story – but mindful of the importance of recognizing the dignity, the fragility, the vulnerability that each human being has… and break that cycle of the world being filled with Joe’s and Normas. 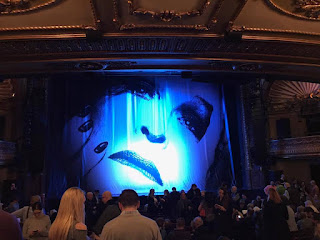 That I could reflect on this story (with the soundtrack on in the background) – to me is what great theater is. Hope you’ll have a chance to catch this revival in it’s final weeks. (For students, if you’re interested in seeing this, I can give you links to how to get discounts – as tickets can be pretty steep)