Hi everyone – here’s my homily for the THIRD SUNDAY OF EASTER – APRIL 30, 2017.  The readings can be found at http://www.usccb.org/bible/readings/043017.cfm .  Thanks as always for reading; for sharing it on Reddit, Twitter, Facebook and for your comments and feedback.  Thanks as always!  Fr Jim 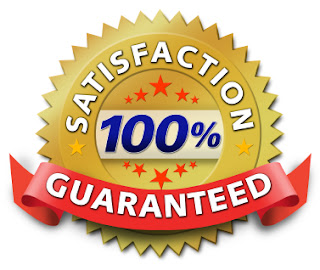 HOMILY:
On Friday’s The Catholic Guy Show, the host, Lino Rulli talked about this growth of what can be described as “Catholic Self-Help” books and programs… Which as we started to look at the advertisements for them, you could be concerned they were making some lofty promises and outrageous claims. One guaranteeing to free you from any addiction. Another one promising to help you achieve the peace, the happiness you’re longing for. All you have to do is buy their book!

One “program” in particular that I found particularly frustrating was directed to parents saying “You wish your child would return to church?” and then after sharing some frighteningly true statistics about the number of people who’ve stopped going to Mass, or claim not to be Catholic anymore made the bold claim ‘You need proven strategies that work’ – as they introduced their 16 part video series that promises “How to get your child back to the Church.”

While it’s troubling to see such dramatic claims like that, I realized part of that disappointment came from them reminding me of some personal experiences. I don’t know how many conversations I have had over the years that start with “Yeah, I was raised Catholic, I used to go to Mass, but . . .” And then it might go in a whole bunch of different directions – I got a divorce . . .  The priest in my parish was accused of abuse . . Both of my parents died within three months of each other . . .
Or something like,

I prayed and prayed for my friend to be healed from this awful illness; for this job to come through; to win this award or that competition; to get accepted to that school, get that scholarship; and it didn’t happen, so. . . 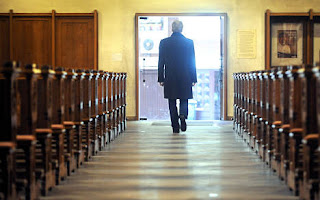 They leave. They check out. They don’t see the point to it any more. They might not have made a conscious decision about it. They might not have removed their names from the membership rolls. But in their hearts or their minds – they’ve left. I have to confess that earlier in my priesthood, when a story started with “Yeah, I was raised Catholic, I used to go to Mass but . . ,”  I used to be prepared to get into ‘debate mode,’ prepared to argue. I was going to make them see the light, I was going to get them back, trying to score another point with Jesus (Look, Jesus – I brought another one back!)

I’d say, ‘You got a divorce? Well, maybe we can meet and I can help you get an annulment’ (as if that would erase all the pain involved in divorce). Or I’d say, ‘Your priest was removed? Well, did you know that the number of priests like that is statistically very small compared to the vast numbers of good guys’ (as if that would somehow would make those horrific atrocities go away)

Sure I was well intentioned and there was some truth in those statements. But when I think back I kind of cringe at those memories. For one thing, I can’t remember any time where that approach actually worked.  In fact, those times were all utter failures. Because my focus was on me and what I wanted to do… I was going to logically convince them they were wrong – I was going to get them to go to Church, be a part of a community, fix whatever problem or mistakes, so that – so what, exactly?

If a relative dies, and someone tells you, “It’s great because they’re with Jesus now,” that doesn’t help – it just brings you deeper into sadness (sure, I’m happy they’re with Jesus, but I’m still really, really sad, and I still really, really miss them).
If a person you love is sick, and a well intentioned friend tells you that, “God never gives you more than you can handle” that often times makes people feel worse and it just leads you deeper into confusion (as if God wants evil for any person).
People say these types of things, share these expressions and the last thing they want to do is cause any more pain or hurt, but they do hurt.  These well intentioned folks want to be a light, relieve pain, somehow make things better –  and, somehow, they end up arguing with you, demanding to be heard, telling you how wrong you are. And because they seem so confident – and you can’t see it – can’t hear it – can’t understand it - you feel even more lost, even more disconnected.
For us as Catholic Christians, it might be a novel idea to actually look to Jesus for an example on how to handle difficult, delicate, painful situations. Like we just heard in this Gospel. Where we hear of the two people on the road to Emmaus, on their way out of town. It’s all been too much. Jesus was tortured, mocked, killed.   That was traumatic enough. In their minds, their hope is gone… Jesus’ vision and promises have all been crucified on that cross with Him.  In addition, they themselves have all been miserable failures in being able to stop the madness – or even have the guts to stand by their friend as he died. While Jesus was in the tomb, they had huddled together with the other disciples, hiding in fear.  Then, here it is Easter Sunday Morning, they hear these crazy reports from the women announcing they’ve not only seen angels, but angels proclaiming Jesus is alive.  Their response: They hit the road.
It’s just too much for them to believe. And so we read they are “looking downcast” – basically,  they’re depressed – they’re arguing among themselves- and they’re on their way out of town. “Yeah, I was a follower of Jesus, but . . .” 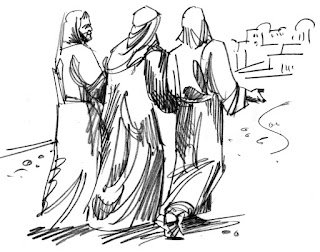 What stands out in reading this beautiful encounter is that what ultimately brings their slow hearts back ‘up to speed’ is how they meet Jesus in their depression – on their roads of sadness, in the midst of their confusion.   They discover Jesus’ loving presence in the midst of their pain, doubts, and failures.  And how does Jesus do that? He patiently listens to them, (notice he doesn’t jump out and say “Uh, guys, it’s me…”) Because He knows what they’ve gone through has been awful – Not that Jesus hasn’t had a bad couple days too – but in His selfless love, he listens to them share their pain and because He Listens to them, they are prepared for Jesus to share His story – even though they don’t at first realize it is Him.

And what do they hear? That were able to hear Jesus recount to them that even in the midst of incredible suffering, He knew His Father was with Him- Knew he wasn’t abandoned and knew the Father was leading Jesus into His Glory. As they listen to Jesus, little by little, the unbelievable words of the women became a little less unbelievable . . .

As these Emmaus-bound travelers listen to the Jesus they still don’t yet recognize, something about what He is saying is different – their hearts start to “burn within them.” They can hear in His words the testimony of someone who has gone through incredible pain but never doubted God was present to Him, was present in Him.

They want that too.

And so – as this ‘stranger’ seems about to leave them behind and continue His journey - they ask Him, and He agrees to stay with them. And in that staying with them, in that sharing in the Eucharist, their eyes are opened and they finally see that Jesus has been right there with them, all along.

That’s the central message that this Gospel wants us to rejoice in. Easter wasn’t just a historic event that happened thousands of years ago and ended. We as Jesus’ disciples 2000+ years later have come to know, and experienced and believe that Jesus is right here with us, too.  But we can’t allow our faith our belief to blind us to those we know who aren’t with us – or perhaps even some who are – who might not feel that; might not believe that – because of some pain, confusion, doubt, uncertainty they’re experiencing in their lives.  Something that is causing distress or despair in their spiritual lives that makes it hard for them to see Jesus, knowing Jesus is present to them in whatever trial, whatever cross they are bearing…

Rather than trying to explain to them how He is, Jesus invites us to listen to their pain. Instead of looking for proven strategies to get them to come to Mass, Jesus wants us to help them carry their cross. Then perhaps, our Love, our daily walking with each other through, at times, unbelievable difficulties, will make these words of scripture believable, relatable. We will experience and be able to share how our own hearts ‘burning within us’ as Jesus becomes present to us – in the Eucharist, in His word, and in our service to one another. And rejoice that Jesus remains and has indeed, ’stayed with us.’