Hi everyone, here’s my homily for the SECOND SUNDAY OF EASTER – APRIL 23, 2017.  Thanks as always for reading, commenting and sharing this blog on Reddit, Twitter and Facebook.  I’m grateful for the feedback and support!   Have a blessed week – Fr Jim 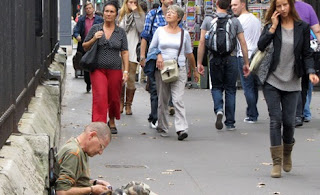 HOMILY:
Some years ago, a priest was visiting Rome and was fortunate to have an audience with Pope John Paul II.  Just an FYI, that’s not an extremely common thing.  Being the head of over one billion Catholics, the Pope’s a busy man – I can’t just email the Holy Father’s secretary and schedule something.   Anyway, this priest had an hour free before he was to meet with the Pope so he decided to go to the Church across the street from his hotel to pray before his meeting.  On the steps of the Church were several beggars.  As the priest passed to go in to pray, he thought he recognized one of the beggars sitting on the steps.  But, he passed him by and went in to the Church to pray.  As he knelt down in the Church, he realized where he knew the beggar from. He rushed back out of the church and asked the man, “Do I know you?” To which the beggar replied, “Heh, yeah, we went to seminary together.”  The priest replied, “So, you’re a priest then?” And the beggar replied, “I used to be, but look at me now.”  So the priest kind of speechless for a moment told the beggar he would pray for him to which the beggar replied, “Lot of good that will do.”

The priest left for his meeting with the Pope but was saddened and startled by this unexpected reunion.  So much so that, ordinarily when someone meets the Pope, it’s a pretty formal thing – there’s usually some brief introductions and a respectful gesture and that’s it… Not a lot of chit-chat or anything.   But when this priest went to meet the Pope, he bowed his head and found himself kind of blurting out the story about the beggar he had met earlier in the day.  John Paul looked concerned and told the priest that he would pray for this beggar.

So the following day, the priest went to the same church and saw his beggar classmate once again. He told him, “Guess what, not only am I praying for you but now Pope John Paul is!” The beggar replied, “Yeah, so what, it won’t do anything.”

Later that day, the priest got a call from the Pope’s office. The Holy Father wanted to have dinner with the priest and he wanted him to bring the beggar. So, the priest tracked down the beggar a third time and told him, “The Pope invited me to dinner and he said that I had to bring you as well.” “Me?” said the beggar, “Look at me, I haven’t showered or shaved in who knows how long and look at my clothes.”  “I rented you a room in the hotel across the street and got you some clothes as well, but we have to hurry,” said the priest.

Not long after, the priest and the beggar were meeting with the Pope to have dinner. They met in the Pope’s private residence and enjoyed wondrous hospitality. The first course came and the second and third. Before dessert, the Pope motioned to the priest and asked him to leave the room for a bit. So, the priest went outside and left the Pope and beggar in the room by themselves. Almost a half hour went by before the priest was allowed back in for dessert.  After which the two men said goodbye to the Pope and left. 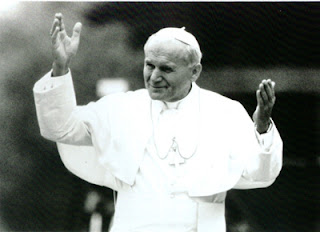 When they were outside, the priest asked the beggar, “What did John Paul say to you in there, what happened? ”  The beggar said a little timidly and quietly, that the Pope asked the beggar if he would hear his confession. The beggar said, “Me! How could I? I’m just a beggar now.”  The Pope replied, as he clasped the man’s hands in his, “So am I.”  So he heard the Pope’s confession, and then the Pope returned the favor and heard the beggar-priest’s very lengthy confession.  Not long after that moment of reconciliation, the beggar was re-instated as a priest and the Holy Father sent him to that parish church where he once begged to minister to those who still did.

Think about those words of the priest-beggar said at first– “A lot of good that will do” when his former classmate from seminary promised his prayers for him… or “It won’t do anything” when he learned the Pope was praying for him.  Those cynical words aren’t so unfamilar to us are they?  We’ve may have heard them – maybe even said them ourselves… and often times about the same things:   What good will going to confession do, I’m just going to repeat the same things again?  What good does going to Mass do– it’s so boring… What good does any of this faith in Jesus do when awful things keep happening to me, to my family and friends, to the world around us…

What we celebrate this season of Easter is a God who tells us that when we turn to Him, we should expect the unexpected… In raising Jesus Christ from the dead, God has shown in a way that has altered history forever very clearly to expect the unexpected.  In this Gospel, the apostles who knew that they had failed miserably are gathered together.  There weren’t able to stop Jesus from being arrested, falsely accused, tortured and crucified.  They weren’t able to stop it, because they weren’t even there! They had bailed on him.  In the midst of that failure of epic proportions, their worlds must’ve seemed to have been destroyed forever.  More than likely that first Good Friday and Holy Saturday, they remembered all Jesus had said and done over those three years they followed him, and maybe a cynical thought came to mind saying – yeah, a lot of good that did.   Perhaps somewhat jaded themselves thinking there was nothing left to do, they lock themselves and isolate themselves from the world.

And it is right there… There in the midst of that isolation, that cynicism, the sense of defeat that the resurrected Jesus Christ comes to meet them.  He stands in their midst, not inhibited by the locked doors or their broken, dis-spirited hearts.    He doesn’t offer words of condemnation, or judgment on their failures. “Uh, guys, so what happened???” – Instead he comes and says “Peace be with you.” And then He tells them what they’ve just experienced, this undeserved forgiveness, they are to go forth in His name and do the same, share the same (which is one of the places in Scripture we see the basis for the Sacrament of Reconciliation/Confession by the way…)

In the matter of moments, these first followers experience Easter themselves… something quite unexpected became real to them.  Not just that Jesus was risen from the dead, but that they too were to rise up from their own feelings of death, their own experiences of destruction and to start anew. 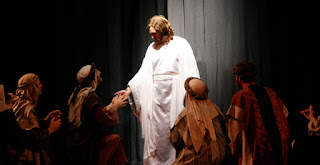 Then there’s Thomas, who is I think, a bit unfairly is considered by many to be the cynic, the “doubter” because he misses this first encounter.  (I always wonder what he had going that night?  He should be the patron saint of people who miss Mass on Sunday Night, cause “something else came up”) But the reason I think it’s unfair that he’s simply referred to as “Doubting Thomas” is because it’s understandable that he would doubt.  The story sounded too good to be true, the failures on their parts were all too real.  Yet, we can’t miss something that’s so important to this story:  There’s a part of him that wants to believe and Hopes it’s true – Hopes that the Easter news is real.  Wants to expect the unexpected himself.  How do we know that?  Because HE’S THERE the following week.  Despite his objections and initial dismissal of his fellow apostles testimony, he’s with them in that upper room the next week and is able to experience the Risen Jesus Christ revealing His living presence to him.  And so now Thomas experiences how real Easter was as well.  And the God who had raised Jesus from the dead would continue to do amazingly unexpected things in all of their lives.

Which is the promise of Easter for those who continue to follow Jesus Christ.  The sad reality is that a week ago, churches were overflowing with present-day disciples who came to hear, once again, this good news of Jesus’ victory over death.  And yet with their absence today, you wonder if as they heard that news recounted again do they think to themselves “so what?  A lot of good that will do?”  Even for those of us who are here, maybe some of us are going through things that make us doubt… have had things that have hurt us and left us somewhat cynical.  Like Thomas, we hope for the best, we want to believe but… we’re not getting ourselves too excited lest we are let down again.

Yet Easter calls us to expect the unexpected.  The new life of Christ wants to resurrect that which has been beaten down, even died within us.  Just think about it, in the matter of a dinner, and experiencing the Sacrament of Reconciliation, Pope John Paul II was able to help a beggar become an active priest once again.  Jesus Christ was able to reach this man who had felt abandoned and enveloped in darkness through a former classmate and through the Pope.

What is going to be our story?  Right now, Jesus Christ, risen from the dead wants us to expect the unexpected – to do amazing, life-giving things for each one of us – and in fact is counting on us to be His ambassadors to people who feel abandoned and isolated.    Too often we find ourselves like the apostles were that Easter night – limiting ourselves by our mistakes and failures and forgetting what wonders our God is capable of (which is exactly what Satan, the prince of darkness wants us to do).  How is Jesus trying to cast his glorious light into the darkness of our lives?  How is He trying to break into the rooms of isolation we lock ourselves away in to speak his words of Peace, of Forgiveness of Life-altering transformation?  If we open our hearts to let Him, we might be surprised to find the good it will do.