Hi everyone, here’s my homily for the FOURTH SUNDAY OF LENT – March 26, 2017. The readings for today can be found at http://www.usccb.org/bible/readings/032617.cfm  Thanks as always for stopping by to read this blog; for sharing it on Facebook, Twitter and Reddit; and for your comments and feedback.  Thanks and have a great week! God Bless – Fr. Jim

Whether you tweet or not, you probably have heard of Twitter… But more than likely few of you would recognize the name “Biz Stone.” Biz Stone and two of his friends were the inventors of Twitter. Back in 2006 they recognized the number of people who have cell-phones had skyrocketed beyond anyone’s imaginations – and thought “imagine if we can create a social networking thing that people could use on their cell phones through text messaging. That’s why twitter is only 140 character messages so that you can send it over text message. Well you guys know the rest of the story (and are helping to write it) The phenomenon of it is only growing. Reportedly, it generates two and half billion dollars a year in revenue… over 100 million users post over 342 million tweets a day.

What’s amazing though is when you hear parts of Biz Stone’s life story it’s hard to imagine him being in this position. He grew up in a very poor area of Boston. His father abandoned his family when he was 10, battled substance abuse, and went on to father brothers and sisters that Biz doesn’t even know. In an interview, Biz shared a particularly sad story how several years ago he saw his dad, and the man didn’t realize that Biz was his son. As a result, Biz himself struggled through his formative years… He dropped out of two universities after attending each of them for a year each. He said that he was amazed that he was even able to land a job a few years ago at Google which he attributes more because a good friend of his worked there than because of his background or qualifications. Eventually he would leave that company with two buddies to create Twitter. 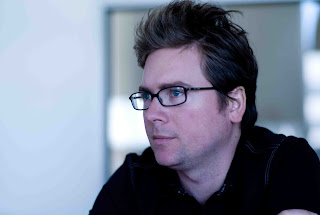 With all the obstacles, all the challenges, all the problems, it’s hard for many people to believe how Biz Stone’s story has turned out the way it did. He shares how many of his family and friends seem pretty surprised by it, even to this day… Asked in another interview whether his mother is proud of her son’s success, he replied: “I think so but she’s more the type to complain and point out flaws.”

Often times when we hear a background like this, when we hear all of that brokenness, we fall into the same mistake that a majority of the people in today’s Gospel have: limited vision. Not daring to see or imagining things can be different for ourselves. Not believing things could change for someone else… Not realizing how we’ve confined God to a box of our creation.

In this Gospel, we hear a miracle story – this man who has been blind from birth is blessed with the gift of sight after this encounter with Jesus. But if we think about it – the bulk of the story is about all the outside characters who have limited vision. They put the blind man, each other, and God in a box.

Think about all of that back and forth — at how the conversations go – “Why is he blind?” – Well he must’ve sinned or his parents did. Well now he’s cured – that’s not really the blind man, is it? No it just looks like him. NO IT IS HIM. Really? I don’t believe that, get his parents – ask them… The parents arrive and confirm he’s their son, but even they don’t know what to make of it “we don’t know how he sees nor do we know who opened his eyes. Ask him, he is of age, he can speak for himself.” Even the blind guy now seeing is a bit cautious… he gives the very basic facts “that guy Jesus made clay, anointed my eyes, said go wash up in that pool and I did…” Why all the hesitation? Well the Pharisees had already had been frustrated with Jesus for doing things like this, curing people on the Sabbath which was technically against the commandments. So the Pharisees argue he can’t be from God. After all this back and forth the blind man argues – look I can’t say that he’s a sinner, I can’t say he’s not from God… [HOWS THAT FOR A RINGING ENDORSEMENT? JESUS HEALS THE GUY AND THAT’S THE BEST HE CAN SAY– HE’S NOT A SINNER?] The guy goes on All I can say is that I was blind, now I can see. It’s almost like the guy doesn’t want to be bothered anymore, he basically asks his interrogators Why are you hassling me as he asks them – Do you want to follow him? At that the Pharisees are done. They are know what they know: God spoke to Moses… They learned to keep holy the Sabbath from Him, Jesus is doing stuff he shouldn’t be doing on the Sabbath – so they don’t know where Jesus is from. Because He did this on the Sabbath, he must be a sinner and God doesn’t listen to sinners…

A nice little box they have there.

It’s easy for us to be critical of the characters in the Gospel – But as we hear this on this 4th Sunday of Lent we’re meant to ask ourselves – how limited are our visions? Often times we don’t even realize how narrow our views have become – we’ve gotten into such a narrow view of who we are, who someone else is, who God is, or what’s possible when we let Jesus into our lives. Like the people in the Gospel, we allow ourselves to be trapped into these diminished limited roles:

– The guy who’s been blind since birth, probably thought he’s supposed to remain that way… that’s all he’s known, so nothing is going to change that.

– Most of the people in the Gospel had assumed that the blind man or his parent’s did something wrong for this to happen, so the whole family has been living with this cloud of shame for years. 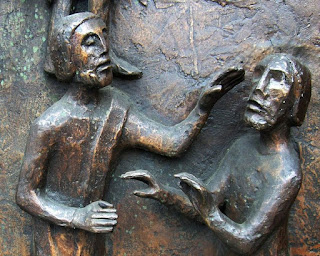 – When Jesus Christ is able to do something incredibly miraculous, something that should have brought rejoicing and wonder and awe, look what happens. The parent’s who had already lived with this messed up belief that someone in their house must have done something wrong that caused their son to be blind – an accusation they believe because of some of these people from the temple – are now scared because of this healing they might be thrown out and rejected from that very temple!   How messed up is that???

Because Jesus didn’t do things the way “He was supposed to,” because He didn’t conform to their understanding or expectations,- the Pharisees go for broke, they say he must not be of God. What’s so sad is that with these reactions, only one man’s sight is restored. The rest of this man’s family, the rest of this town miss the opportunity to have their lives changed by having their vision corrected by Jesus Christ.

We live In a world that is overly cynical, distrustful of anyone or anything. Biz Stone could have easily allowed all the negatives in his life to be an excuse to opt out of even trying to do something meaningful with his life and blame his father, his surroundings, everything around him for a limited and diminished existence rather than becoming the founder of something that has changed our culture yet again…

For you and I we might not even realize how blind we’ve become – to who we are…to what it is that blinds us, to what it is that diminishes us… blind to the sins that cripple us… to the lies that we’ve believed about ourselves because of those sins that trap us into thinking there’s nothing we can do – nothing’s going to change… Blind to how Jesus is among us, how he wants to save us – not just for eternity, but here and now. How Jesus wants us to experience miracles… unexplained, unexpected, life altering miracles where God blesses us with a new vision, a new perspective.  That enables us to see past the limited existence we experience now into a life we could have never imagined possible.

You can tweet this (and it’s under 140 characters so it will fit:) God never stops trying, we do… If we continue to have a limited vision of God, then his activity in our lives will remain limited.