Hi everyone, here’s my  homily for the THIRD SUNDAY OF LENT – MARCH 19, 2017.  The readings for today can be found at http://www.usccb.org/bible/readings/031917.cfm.  Thanks as always for stopping by to read this blog; sharing it on Facebook, Twitter & Reddit; and for your feedback and comments.  Have a great week!  God Bless – Fr Jim 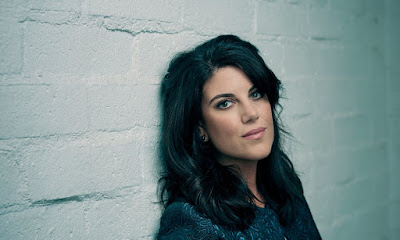 Over a year ago, I saw this article that really struck me – but that I was afraid to use because of the political overtones to it. Overtones that post-election I thought would have abated by now. But… well… anyway. That reality aside, the story is almost too important not to share. It’s about Monica Lewinsky.

For many of you (college students) you were probably 4 years old when this young woman became the center of attention, an international story. For those of you not aware, quite simply, she had an adulterous affair with President Bill Clinton (while she was an intern at the White House). After some press seemed to sit on that story, a few websites got a hold of it and published it online. Thereby this became arguably the first “internet” “viral” thing (remember this was in the early days of the internet… no facebook or social media…). While eventually President Clinton would be impeached for this whole affair, something that is rarely mentioned when discussing his legacy – for Lewinsky, her life in many ways has been solely defined and reduced to this sad episode. She had to give graphic testimony about the affair to a grand jury – after the President went on television and called her a liar denying he “ever had sexual relations” with “that woman.” Here was a wide-eyed, naivete, young woman in her 20’s who had gone from basically anonymous to enamored by a very powerful man who was attracted to her to a headline story.

She describes it like this: “Overnight, I went from being a completely private figure to a publicly humiliated one worldwide. Granted, it was before social media, but people could still comment online, email stories, and, of course, email cruel jokes. I was branded as a tramp, tart, slut, whore, bimbo, and, of course, ‘that woman’. It was easy to forget that ‘that woman’ was dimensional, had a soul, and was once unbroken.” 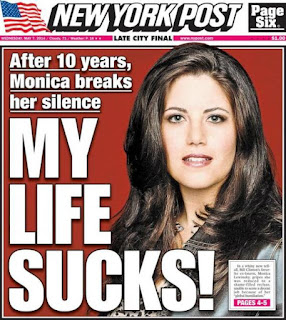 I must admit, having lived through this era, and having to hear and read chapter and verse way too many sordid and disturbing details about this episode, to my shame I must confess, I rarely had thought much about Monica Lewinsky other than somehow being connected to this really awful chapter of Presidential history. Reading this interview where she described the whole ordeal as “[feeling] like every layer of my skin and my identity were ripped off of me in ’98 and ’99. . . It [was] a skinning of sorts. You feel incredibly raw and frightened. But I also feel like the shame sticks to you like tar,” really was a revelation for me.  (the full article:  https://www.theguardian.com/technology/2016/apr/16/monica-lewinsky-shame-sticks-like-tar-jon-ronson )

Feminists, politicians, psychologists, columnists can all pick Monica Lewinsky apart – in fact, they have and continue to do so all these decades later. What was surprising, even in the divisive political circles where one side would support their President and try to spin this as no big deal, a “private indiscretion” and the other side saw this as a way to oust a political foe – it seemed no one defended Lewinsky… and both sides treated her cruelly in their own ways.

For most people, their indiscretions, their mistakes, their failures, their sins – are things that they try to forget about; ignore; hide. Imagine those indiscretions, mistakes, failures, sins being known by the entire world. Imagine the lack of understanding, the lack of compassion, the ridicule, the shame being intensified… Late night comucs using your name as a joke. The more I read her article, – particularly when she talked about how she contemplated suicide and longed for anonymity – the more ashamed I was of myself for ever having laughed at a joke about her…

And even more, I began to appreciate this Gospel even more.

Because in it, the Samaritan Woman is suffering a similar fate. Here is another person who was probably called “that woman” as well as all those other awful, gross labels that were attached to Ms. Lewinsky. Here we meet another woman who felt the public scorn, the ridicule – so much so that she punishes herself to go and perform these normal, everyday chores – drawing water from the well – at the hottest time of day, when she knows it’s the least likely time she’ll have to bump into anyone who knows her, who mocks her and judges her. She’s resigned herself to a life of isolation from the world – after being hurt and experiencing brokenness that few understand (or even care to) where 5 marriages have ended and now she’s with another man who isn’t even her husband. 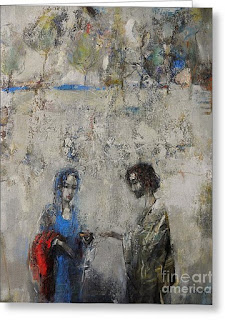 Why this story is so important for us this Third Sunday of Lent, is it gives us a chance to recognize important truths. One, that we’re no better than anyone else. Of all the beautiful, newsworthy, important, even controversial things Pope Francis has said – probably the most memorable in his 4 years as Pope was when he responded to the question “Who are you” as “I am a sinner.” Some treated this as if it was breaking news. But the honest reflection of every single Christian ultimately has to begin with that truth. “I am a sinner.” That is the reason we took time out of our schedules two and a half weeks ago and put dirty-ashen-crosses on our foreheads. Not to boast “Hey I’m Proud to be Catholic”… but rather the complete opposite. In humility, to acknowledge “I am a sinner.”

But the second truth, the even more beautiful and more urgent one after that first one – is how desperately Jesus longs for us to turn to Him. He goes to this extreme length in this passage, to reach out to a sinner – defying cultural customs, religious traditions, every possible level of protocol that you could imagine (Jesus a Jewish Man speaking to a Samaritan Woman… it just didn’t happen) because He longs for every single person’s heart and soul. He knows how intentionally His Father, Our Father, worked to imagine and create each heart and soul. The Samaritan woman’s, Ms. Lewinsky’s, yours… mine…. And despite whatever messes we find ourselves in… despite how awful, and ashamed, and even lost we might feel (or the world around us tells us we are) God stepped out of eternity, into our world, and comes and meets us right there, as we try to hide our shame, hide ourselves. And He comes to say I love you… I have not forgotten you… You are not unlovable… You are not unforgivable… You were made for more than this…

There is nothing that we can do to stop God from loving us.

I was happy to read that Monica Lewinsky has turned her painful experiences into something positive… Trying to raise awareness on”internet shaming”; being an advocate against cyber-bullying. But I’m saddened to hear how she still encounters hostility, still is lampooned and that often times it causes anxiety, and other painful reactions emotionally and even physically. I hope and pray that somehow she too can experience the Love of our God – that she realizes she is a beloved daughter, made in His divine image – and that no one has the right to diminish that dignity. There is nothing that we can do to stop God from loving us. There is nothing we can do that will make Him ashamed of us.

More than anything else we do this Lent – all the great Lenten practices and disciplines that we participate in (not eating meat on Fridays, giving something up), the thing Jesus longs for the most – is for each of us to take time to truly own up to our sins, and experience his Love and Mercy and forgiveness in the Sacrament of Reconciliation. So that we too can experience that joy of encounter that this Samaritan woman did… who drops her water jar, runs into town and shares the Good News – that she has met the Christ – with the very people she was too embarrassed to even talk to before. Something inside of her changed, and it made her stronger, made her braver, made her hold her head up, freed from her sins… once she came to realize for herself that There is nothing we can do to stop God from loving us. This Lent, may we be brave enough, humble enough, like the Samaritan woman to let Him and then to love Him back.