Latest News
Home /Blog/IF I HAD (400) MILLION DOLLARS
Hi everyone, here’s my homily for the EIGHTH SUNDAY IN ORDINARY TIME – February 26, 2017.  The readings for today can be found at http://www.usccb.org/bible/readings/022617.cfm.   Thanks as always for stopping by to read this blog, for sharing it on Facebook, twitter and reddit and for your comments and feedback.   Have a great week!  God Bless, Fr Jim 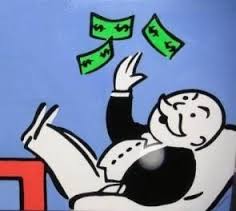 So this past Tuesday night I ran out to the store to buy a Powerball Ticket. Actually truth be told, I went to two stores since the first place didn’t sell lotto tickets. That’s not something I do regularly, but with the jackpot hitting $430 million dollars, I kind of felt like I had to take a chance. (Spoiler alert, I didn’t even get one number).
While I don’t usually throw away money (which is what gambling is) I do find those jackpots hard to resist and it seems worth a buck or two to at least buy a ticket – just to have that fantasy of what I would be able to do for family, friends, the Church and different charities and causes if I won a jackpot like that. I’ve said I would like to eliminate the debt of everyone I know – whether it’s mortgages, student loans, whatever…  Help my brothers to retire now – my one brother to get a bigger house for his family – take care of my Mom… Build a new Newman Center.  Those are priest dreams.
How about you?  Maybe pay off college loans… Your credit card bills… Would you continue going to school anymore? Hopefully you would! Perhaps you’d just have a very different attitude about things though – especially in terms of finding a job. $400 million dollars would probably give you a lot more flexibility.
For most people the idea of having a great deal of mammon (oops, I mean money…) seems to be a hope or a goal.  And while a $400 million jackpot seems unlikely (the last I saw it the odds were 1 in 258, 890, 850 -which is almost like saying one person in the entire United States) even though those odds are CRAZY we are still curious, desirous, even somewhat hopeful that maybe, just maybe it would happen for us.
A couple of years ago, there was a story that comes to mind when those lotto dreams start to get a bit too appealing. The headline was LOTTO WINNER WISHES HE TORE UP THE TICKET.  It was about a guy by the name of Jack Whittaker who believes that his life was “cursed” since winning a lotto jackpot of $315 million.  Within five years of winning this jackpot (which he did on Christmas morning, no less, in 2002) – his wife left him, his drug-addicted grand daughter died, he’s had a long list of indiscretions (from bar room fights to law suits) that have been documented in the courts and the newspapers.

You couldn’t help but feel bad reading that and thinking to yourself, geez, he really has had a streak of bad luck.  But as you read this lengthy story and interview, this quote stood out:  ”I don’t have any friends.  Every friend that I’ve had, practically, has wanted to borrow money or something and of course, once they borrow money from you, you can’t be friends anymore.” 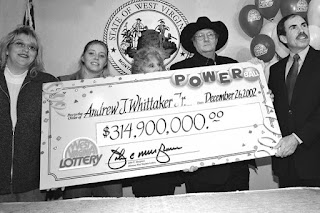 Why that stood out for me is that in that one sentence it seemed to reveal that the money had become the most important thing in his life. Despite the number of charities he’s donated to, despite the two churches he helped build – his financial wealth became something of greater value, even though he had an abundance of it even prior to winning the lotto (oh – I forgot to mention that before he won the $315 million Powerball, he was already worth over 15 million dollars)

What makes me say that the wealth became something more important to him? He’s buying lotto tickets even though he’s already a millionaire… He’s talking about how friends borrowed the money – which means, he expected it back.   Even in talking about his drug-addicted granddaughter dying:  ”If it would bring my granddaughter back, I’d give all [the winnings] back.  But I can’t get her back, so might as well keep the money, I guess…” Through it all, it sounds like the money had a more exalted status in his mind even through his grief and mourning; he looked to his wealth as some source of comfort.
Right out of the gate in today’s Gospel reading Jesus is pretty upfront: No one can serve two masters.  He will either hate one and love the other, or be devoted to one and despise the other.  You cannot serve God and mammon (mammon is basically goods, or possessions that money can buy). He says that before he goes off in a beautiful, if somewhat idealistic, sermon telling us “not to worry.”
Not to worry about our life – what we will eat, drink, wear.  If we focus simply on the “don’t worry section” – as beautiful as it is, though, it just seems simplistic – if not impossible for us.
Which is why that first part is so essential.  In laying it down right out of the gate that no – we cannot have it all – we cannot put the goal, the emphasis, the desire of our life in the pursuit of possessions, of things, of wealth alongside our desire to be a child of God.   If we choose the pursuit of worldly things, then the list of worries that Jesus mentions is likely, just ask Jack Whittaker, the man who wished he never bought the lotto ticket.
Choosing to serve God doesn’t insulate us from those material concerns, nor does it guarantee a stress free, worry free life.   Sure the grass of the field doesn’t have to worry about how it dresses, but we’d have problems getting a job if we didn’t put a little time, effort and thought into that ourselves.  And as another great preacher pointed out, the beloved parable that Jesus tells of the Good Samaritan– well that Good Samaritan would have little more than pity to offer the victim he finds left in the ditch by robbers if he had no money.
So this isn’t about a radical renunciation of all things of this world.
It’s about not being possessed by them.
It’s about not being obsessed by them.
It’s about not allowing ourselves to relentlessly go after them and somehow fall into the belief that with just a little more wealth, with just a little more “security,” with just a few more possessions… then our worries would be vanquished.
It’s about setting our hearts, our souls, our minds, our lives with God at the center.  Letting Him into those fears.  Letting Him direct our pursuits.  Letting Him challenge our desires and purify them to put them at His service and for His glory rather than allowing ourselves to become slaves to our own needs.

And they’d be right.
And that would be it.
That money is rendered useless in the face of death, in the restlessness of our hearts yearning for love, in the desire of our souls, in our search for meaning.
Jesus, in inviting us to choose Him, to follow Him, to pursue Him, promises us a fulfillment of our desires by offering us friendship with Him.  Through His words, His miracles, His example – and most of all, through His passion, death and resurrection – Jesus has proved time and time again he is a friend worthy of trust, a friend who, once we possess him, challenges us not to let our bank accounts grow but to let our hearts grow, become more expansive, giving and loving.  A friend who, when the things of the world, when the troubles of our lives weigh us down, stress us out – is there for us.  Is enough for us.  Is all we ever needed, in the first place.